Between traveling the globe with musicians such as Enrique Iglesias and designing large-scale concert stages, Houstonian Travis Shirley has a lot to be thankful for these days.

“I am so grateful for what I am able to do,” he says. “What I strive to do is really take each project and be appreciative of it.”

The San Francisco native has had a lifelong love for music—a passion that has resulted in a successful career designing television and touring stages for artists such as Jennifer Lopez, Marc Anthony, and Sam Hunt.

Growing up in the world of live concerts and recording studios, Shirley was destined for a career in stage and lighting design from an early age.

“My father was actually a musician, as well as my brother,” he notes. “There’s always been a lot of love for music in my family. All those experiences really got me interested in music at a very young age.”

However, it wasn’t until Shirley moved to Houston in his early teens that his passion for music turned into a full-fledged career. “When my family moved to Houston, my dad started working in the golfing business. At the time, I  was in love with this country band called Brooks and Dunn. One day, my dad was thinking about ways to market his business. I said, ‘Why don’t you call Brooks and Dunn? They play golf.’ That’s exactly what ended up happening.”

Soon after, Shirley formed a relationship with the country band, giving him access to everything that happened backstage at their shows.

“Any time the band came to Houston, I would get out of school early and go to the sound checks and hang out with the lighting guys, the video guys—the whole crew,” he recalls. “That really ignited my career in production design.”

Shirley’s devotion to his work has always stemmed from his passion for creating immersive experiences that both supports the music and creates a memorable event for fans.

“Production design is so interesting to me because it involves coming up with the creative concept of the entire visual element of the tour,” he says. “I love spearheading all the elements that are related to the production—the stage design, the set design, the lighting design, whatever special effects we have happening.”

While the fan experience is important, working with the artists to execute their unique vision is Shirley’s real challenge. 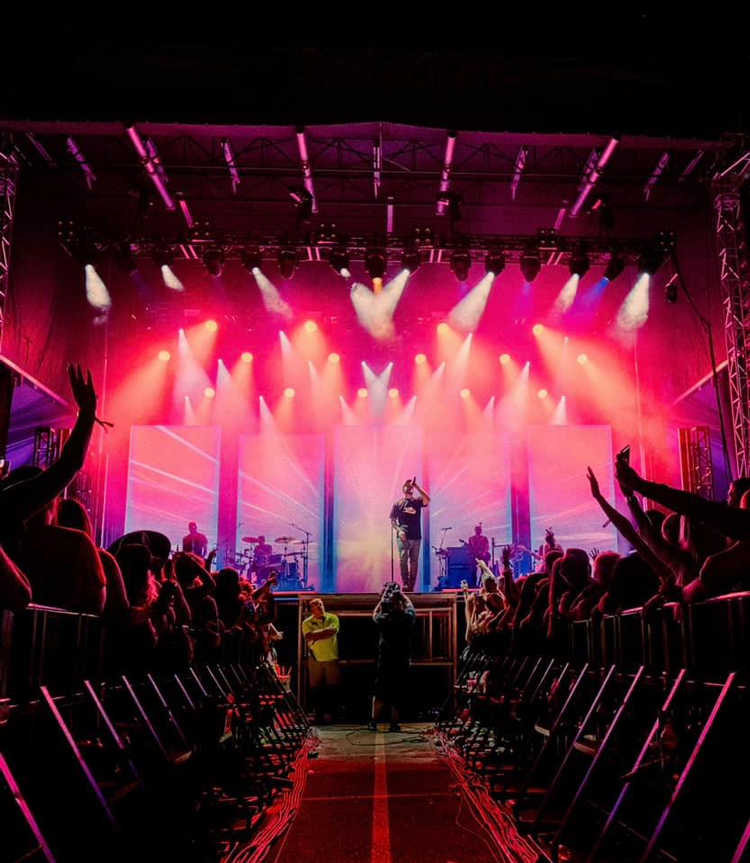 “I usually pitch an idea of what I want the show to look like, based on my initial meetings with the artist,” he says. “Once they get approved, the artist and I work together and start creating the show in terms of what will happen. It’s almost like writing a script, to some extent. You can almost view me as a music producer, but for the visual side. I try to get on a comfortable creative wavelength with the artist [so we can] both work at our maximum creativity.”

Shirley also tries to create a unique “look” for each show. “I don’t really have a specific style, but I think we are all human and we have tendencies to do things a certain way. I pride myself in making each show different.”

Nowadays, Shirley needs to shake things up even more as COVID-19 forces artists and designers to get creative with livestreaming and pre-taped performances. “In terms of the music industry, we all have had to collaborate and come up with some unique ways to portray the artist,” he notes. “One of the good things to come out of the pandemic is how we produce promotional materials. Artists have become more creative with their late-night TV appearances. They can now pre-film [a concert preview] and make sure everything is super-creative and perfect. It has opened up the level of creativity and the level of professionalism.”

When he’s not crafting shows and working around the world, Shirley bounces between his two homes in Nashville and Houston.

“Houston is definitely home,” he says.
“I use it as an escape. I learned early on in my life and career that it was healthier for me to ‘leave’ work once in a while, instead of constantly being immersed in it. I like to have a little separation in my life.”

Going forward, Shirley has several projects planned, with a dream tour knocking around in the back of his mind. “I think we designers all have our dream tours. I think mine would probably be Nine Inch Nails or something like that, just because of the complexity of the music. I’m always looking forward to the next project.”