So, she did the next best thing. She became the executive advisor and eventually the CEO of Legacy Community Health, the largest federally qualified health center (FQHC) in Texas, providing high-quality health, social, and educational services to patients regardless of their ability to pay.

“I love this place! At the time I took this position, I said I’d commit to three or four years at the clinic, and here I am 25 years later. It’s been a great career. I never looked back or looked elsewhere. It’s been an amazing career for me. I have a lot of satisfaction that I kept my promise and did not walk away from anything having to do with HIV. I take a lot of joy in what we’ve done over the years here,” she says.

Speaking of that promise she made, Caldwell took the position with Montrose Clinic during a time when HIV/AIDS research was experiencing breakthroughs with antiretroviral drugs, but access to those treatments was not always available. She knew there was work to be done, especially considering the medical industry’s inequities.

“My mother was diagnosed with breast cancer. She had fabulous insurance, and she received great treatment. Then, my best friend was diagnosed with HIV. He had no health insurance, and there is a large stigma attached to [being HIV-positive]. I watched my mom get the best of everything, and my friend get kicked around because he didn’t have insurance. That was unfair,” she says. “I thought that was wrong, and we needed to fix that. When I came to the clinic, it was first to make sure that HIV help was available. But then I needed to make sure that social determinants of health care were available to other communities.”

“At the time I took this position, I said I’d commit to three or four years at the clinic, and here I am 25 years later. It’s been a great career. I never looked back or looked elsewhere.”

Thus, she dove head-first into repairing what she felt health care was lacking. It didn’t hurt that health care was experiencing such miraculous advances in antiretroviral treatments. That meant her clinic (named Montrose Clinic at the time) could pivot from prevention and palliative care to providing primary and wrap-around care for patients who were now able to live to a full life expectancy.

As the clinic started to provide more treatment, Caldwell knew that it had to expand its services to meet the demands of its growing clientele.

“The bulk of our funding came from the Ryan White Care Act and CDC grants through the City of Houston. The board and I realized that this is not a sustainable business model. If we lose one grant, we couldn’t take care of people, and it could jeopardize the organization. We were looking for what made the most sense to vary our income streams at Montrose Clinic.”

This realization necessitated a reimagining of Montrose Clinic’s business model, and Caldwell’s degree from the University of Houston and her previous experience in business administration positioned her as the perfect leader to guide Montrose Clinic through its necessary evolutions.

“One of our sister clinics gave a presentation that we should become a FQHC because, at the time, all the LGBTQ clinics across the country were dependent on the Ryan White Care Act and CDC funding,” she says, mentioning that becoming a FQHC was the pathway to success for Montrose Clinic. “We went to the board with the idea. It was a two-year process to become a FQHC. There was some unhappiness that we adopted the business model because it meant we would expand beyond just HIV and the LGBTQ community. But if you look at the statistics, 60 percent of our population were HIV-positive or LGBTQ, and the other 40 percent just came to us. So the board agreed. We became a FQHC in 2004 in what’s called a ‘look-alike’ and then received full status in 2006.” 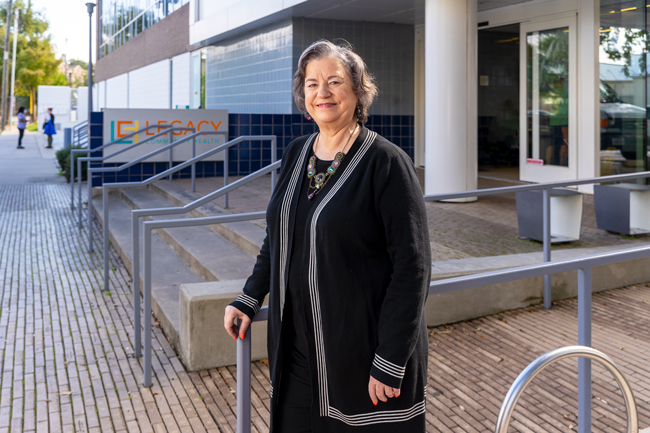 And why not? It’s easier to consolidate patients from several clinics under one roof when the care provided was so similar for each organization, and there is strength in numbers. They renamed the conglomerate Legacy Community Health.

“‘Legacy’ was chosen to represent the legacy of the people who came before us and founded the multiple organizations [we merged with], and [it represented] the people who were here now to leave a legacy for the future,” she explains.

To date, that impressive legacy has only grown. Legacy Community Health now operates in Fifth Ward, the I-10 East Corridor, and in areas as far-flung as Beaumont. The organization has expanded to include care for pregnant women, children, whole life cycle treatment, and behavioral health—in addition  to providing health care to the LGBTQ community and HIV-positive patients.

In total, Legacy Community Health has expanded from a small neighborhood clinic into a $200 million organization with a staff of over 1,200 serving nearly 200,000 clients across more than 35 locations. And it all happened under Caldwell’s leadership.

Now, after 25 years of service, Caldwell is taking her final bow and moving into retirement. Her service to the LGBTQ community has earned her a forever home in the hearts and minds of many LGBTQ and HIV-positive patients.

As for Caldwell, she’s looking forward to taking time to reflect and then consider her next steps post-retirement.

“I am right now positioning myself for what comes next. First, I’ll learn to live without stress and not have 1,200 employees and 200,000 patients. I have not lived without stress for the last 25 years, so I’m looking forward to taking a breath. As time goes on, I’ll volunteer at different places where I won’t be in charge of anything, but I’ll make a difference through my participation.”

Caldwell is a former Harris County treasurer, and her involvement in politics might resurface now that she has more free time.

“I’ve always been into politics, and I’m sure that as the Democratic candidates slate fills out, I’ll volunteer for that,” she predicts. I’d like to flip the state back to Democrat and expand Medicaid.