If a picture is worth a thousand words, Emilio Coochie is writing the epic novel of a lifetime. The photographer and rapper, born and raised in Houston, knows what it means to fail and how to persevere to ultimately achieve your dreams. Today, the artist is working for Houston rapper Megan Thee Stallion while also making plans to release his own collection of rap songs.

And he’s just getting started with his promising career. Phoning in from a hotel room, the 28-year-old, fresh off the plane from a work trip, is energetic as he recalls how his work as a photographer began.

“My journey with photography began in the Myspace era of social media. I loved looking at the blogs and at-home photo shoots that these early social-media influencers posted,” he recalls. Equipped with a Motorola Razr cell-phone camera, Coochie eventually leveled up to a digital camera suitable for photo shoots with friends in his neighborhood. “In high school I took a photojournalism class, and that was the first time I used a professional DSLR camera. I was able to check it out and take it home,” the artist notes. “My senior year, my mom bought me my own camera and I started taking more pictures.”

Realizing he had a knack for photography, Coochie briefly enrolled in the Art Institute of Houston. “I lasted one quarter,” he says with a tone of nostalgia. “I took a photography class and completely bombed it. They wanted us to learn how to use [the camera’s manual settings]. I was stubborn and only wanted to do things with the automatic settings. I thought it was so hard and confusing. That was when I decided to drop out, and I thought maybe photography wasn’t for me.”

But his undeniable talent with a camera kept him in the game. “Friends still reached out and asked me to shoot engagement parties and small events. It kept me going,” he says. “Eventually I realized this is what I wanted to do. My sister bought me a photography book that was like having a friend teaching me these different techniques. I took it with me on shoots and, ironically, it taught me how to use the camera’s manual settings.”

With a catalog of hilarious TikTok videos under his belt, the creator explains how his next move was pivotal for his career. “In early 2018, I reached out to Megan Thee Stallion via Snapchat. I was a total fan of this super-fire female rapper from Houston. I got into her music immediately. I was like, ‘Hey, would you be interested in doing some behind-the-scenes content—photos, videos, blogs?’ She gave me her manager’s contact info, and within two weeks I was shooting her first blog.”

What happened next was the most lucrative use of a sick day ever. “I was working for the City of Houston municipal courthouse, and I was supposed to work the same day I was scheduled to shoot something for Megan. So I called in sick.” He soon began working for the rapper full-time. “My boss was super-understanding and supportive of my part-time gig, but I couldn’t always go with Megan because of my full-time job. She was going on tour with Meek Mill in 2019, and she told me she needed me full-time. She said I needed to quit my job and we needed to go do some hot boy shit and hot girl shit.”

He credits his Houston roots for making rap a part of his life from the beginning. “In Houston, people have parties and kickbacks with their friends. Everyone is hanging out, and at the end of the night everyone just starts freestyling,” he explains. “Growing up, that’s what I did with my friends.”

Commuting downtown from Conroe also helped Coochie hone his craft. “I would listen to 97.9 FM, and they would play a lot of old rap songs. I’d be on Snapchat and start freestyling, and people would hype me up. That was such a confirmation for me. 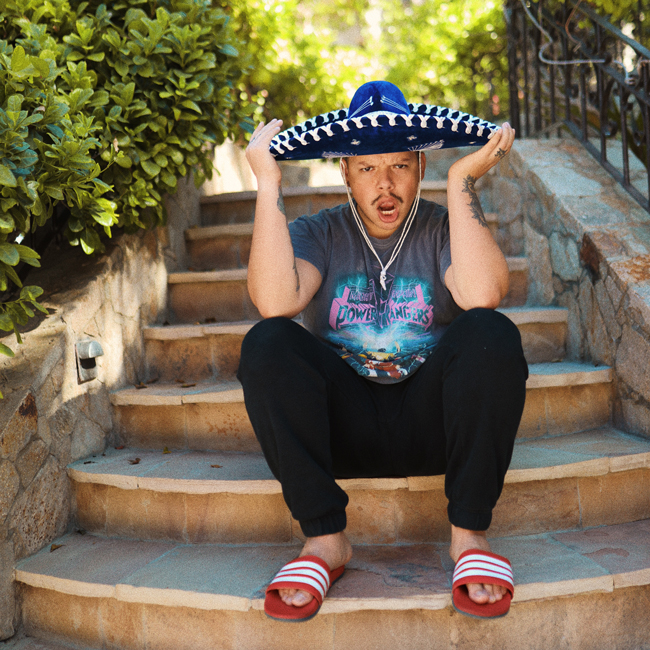 He describes his unique style as “playful pop-rap,” and he’s hard at work on a collection of songs that he hopes to release by his December 7 birthday. “I like to incorporate comedic shit in my music. I don’t take life too seriously, and I like to just say how I feel in the moment.”

Recent soul-searching has led the artist to examine his sexuality, and today he identifies as pansexual. “I love people for who they are, and I’m more interested in their soul and who they are as a person,” he explains.

It’s Coochie’s love for people that drives him to be a positive example for young queer kids. “I really want to be the voice and face for young gay boys. I grew up as the chubby, funny kid. It took a long time to fully accept myself and really love myself. I want to help the younger generation tackle that early on—instilling self-love.”

He pauses briefly before summarizing his biggest ambition in life: “I want people to look at me and see that I love myself so much and they need to love themselves, too.”