He grew up on a farm. He grew up Catholic. But most importantly, he grew up curious.

Ever since he was a kid, Heyd Fontenot has had an insatiable desire to understand, to question, and to create. Now, at 57, he is an insightful and highly successful artist known for his stylized and delicate nude portraits.

His current show, Sacred Order of Eternal Wounds, can be seen at the Galveston Arts Center through July 11. It’s an immersive environment on a scale that is designed to overwhelm your scale, Fontenot explains. The show “delves into the myth of American identity to explore the politicized topics of gender, sexuality, queer identity, and what the artist calls “the false promise of  ‘comfort in conformity.’”

The theory of gender is a common thread that runs through much of Fontenot’s work. He explains that although he firmly identifies as male, he has a great deal of empathy for and is highly supportive of those who do not conform to gender norms.

Fontenot, a San Antonio resident who earned a BFA from Louisiana Tech University in graphic design, didn’t always know he would become an artist. Because he grew up on a farm, he figured he would be a farmer like his father. His mother, however, encouraged him to become a priest. “I believe [this is] what Catholics do with their queer sons and daughters to encourage them into a celibate and acceptable lifestyle,” Fontenot says.

“In my early life, I experienced gender as very limiting,” he recalls. “I felt like a lot of things I was interested in were restrictively gender-oriented. Arts and crafts were relegated to females. [However,] my father was able to be somewhat creative with metalwork and welding. Perhaps because the dangerous or dirty nature of it was acceptable,” he explains.

“I’m not referencing anything beyond their understanding. I made this art for them. It’s a bit like a message in a bottle. I’m attempting to communicate.”

Sewing, on the other hand, would have been off-limits. “That sort of thing is really arbitrary and frustrating, and something that we wrestle with as a culture.

It’s such a useless and neurotic endeavor to uphold these types of restrictions, even unwittingly or unconsciously. But so many [gender-based restrictions] seem to be really funny when you examine them. And it’s all a construct—none of it is natural,” he adds.

How one defines art is a convoluted and often-debated topic. “”Yes… Is it art? Tis the big question. I don’t know if you will have the space to publish my answer,” he jokes. “I think it has to do with intention and care and nuances. You could have a bronze that weighs 5,000 pounds and it could be utterly useless and without aesthetic merit or meaning. You could have a cocktail napkin with a doodle on it that takes your breath away.

“It would be difficult to create a template for defining what is powerful ‘Art’ with a capital A.  [But that’s what] actually keeps it alive. It has to be approached on a case-by-case basis, and it has to do with external elements outside of the object—environmental, temporal, and political—that affect the way we perceive the art,” he explains.

Fontenot knows that art is undeniably his calling—which, he adds, can be hard to explain to anyone who might not have discovered their own “raison d’être.” “I did not have much formal training in my early years, and did not know any working career artists, but I did understand instinctively that this was where I needed to be: the act of making art, and problem-solving in a visual medium, struck a major chord with me. There was a resonance.”

Art is vital, perhaps more now than ever, Fontenot says, “It’s human expression encapsulated in a consumable form. It helps the makers and it helps the viewers. We use art to process all of these tremendous feelings, including anxiety, sadness, grief, and terror. 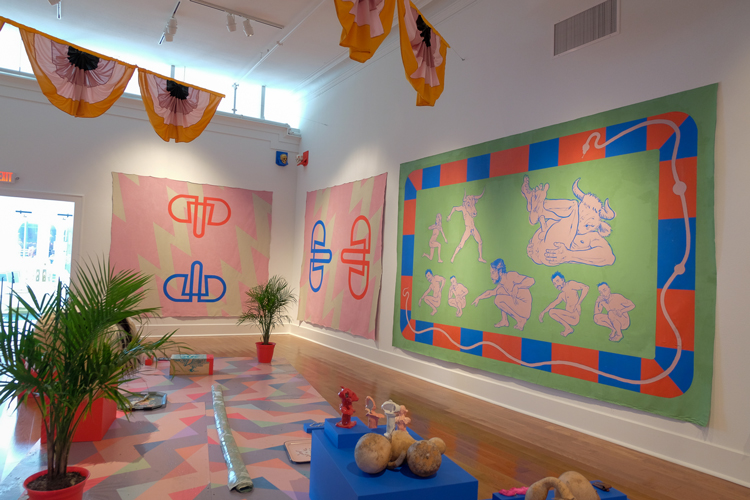 “Societies are judged and defined by the culture they create, so it’s really sad to see people dismiss the power of song, poetry, fashion, and architecture. All of these things affect our daily lives tremendously.”

Fontenot wishes that everyone realized they could have an intimate “experience” with art. “It’s like a mirror. If you sat with the art, it would reflect back to you, and you could experience something profound. In this time of image-binging (and I am guilty of this myself, with things like Tumblr and Instagram), with the proper attention, you could have a profound experience with yourself, with art as your mirror. A spiritual, psychological, and intellectual revelation awaits,” Fontenot says.

If there’s one thing that this visionary artist wants viewers to know about his work, it’s that it’s accessible. “I’m not referencing anything that is beyond their understanding. I made this for them. It’s a bit like a message in a bottle. I’m attempting to communicate.”

Fontenot emphasizes that the intention of his Sacred Order of Eternal Wounds show is to make the viewer think. “I don’t want to throttle you or traumatize you. I want to get you just off-balance enough to have an experience. They’re big pictures, bouncing information all over the gallery. I’m not giving you the answers. The answer is not in the painting. The answer is in you.”

What: Heyd Fontenot’s Sacred Order of Eternal Wounds
When: Wednesdays through Sundays, noon to 5 p.m. through July 11
Where: Galveston Arts Center
Info: galvestonartscenter.org/heyd-fontenot