“The untold want by life and land ne’er granted,
Now voyager sail thou forth to seek and find.”—Walt Whitman

In 2019, Veiga Grétarsdóttir set out on an epic odyssey, kayaking 1,200 miles counterclockwise around the treacherous coast of Iceland. She made history as the first woman to achieve this perilous feat, which had claimed the lives of several others who had previously attempted the same voyage.

Three years prior, at the age of 38, she had undertaken an even more arduous psychological journey: leaving her wife and marriage, undergoing gender-confirmation surgery, and finally embracing her identity as a transgender woman after years of anguished resistance.

Icelandic film director Óskar Páll Sveinsson vividly chronicles both journeys in the moving new documentary Against the Current, which is streaming during July as part of the Museum of Fine Arts, Houston’s Virtual Cinema series.

The film was spurred by a chance encounter.  “A few years ago, I bumped into Veiga, the main character in the film, at a gas station in her home village in the westfjords of Iceland,” says director Sveinsson. “I spoke to her for a while, and quickly realized that here was a woman with a highly unusual, brave, and interesting story to tell.

“I hope this film will raise awareness that some of us have to go to great lengths to find happiness and our true self, and also remind us not to judge too quickly, because everyone is unique in their own way.”

The film traces Grétarsdóttir’s childhood in a fishing village on the far west coast of Iceland, where she was a boisterous child who began kayaking early as a way to escape. Her teenage years brought another period of rebellion. 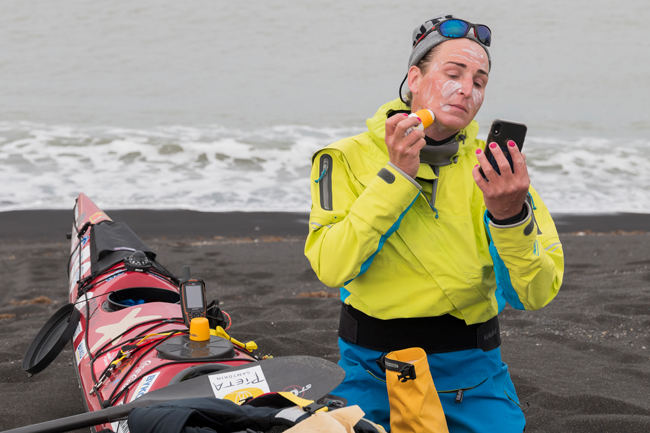 In 2010, she met her ex-wife, Helga Snaedal, and their passion for biking, hiking, skiing, and travel resulted in an immediate and close bond. They each had children already, and they went on to have a child together after they married. In the film, Snaedal speaks with remarkable empathy about her former partner’s transitioning journey, despite the painful dissolution of their marriage.

Interspersed throughout the documentary are dispatches from Grétarsdóttir’s 103-day journey around the coast of Iceland. As weather conditions worsen, the trip becomes
a grim, grueling ritual of physical endurance. At one point, she falls ill for a week. Demoralized and physically gutted, she contemplates giving up.

“She is an extremely powerful woman,” says Gudni Pall Viktorsson, a veteran sea kayaker who served as Grétarsdóttir’s main advisor. “She is independent, very determined, and stubborn. And that is what got her through this.” 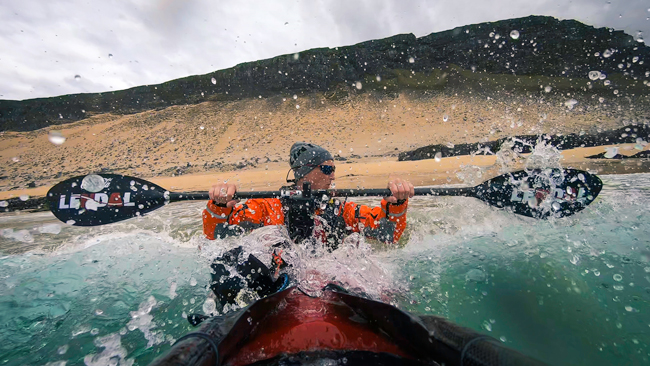 While Grétarsdóttir’s story will inspire LGBTQ people across the globe, it has special resonance for Iceland’s transgender community, says Óttar Guðmundsson, a psychiatrist and member of the transgender transition team at Iceland’s national hospital. “It is monumental for her to do what she has done,” he observes. “It is so important for those who have not come out, and for those who have come out but don’t dare go all the way.”

After Grétarsdóttir completes her trek around the Icelandic coast, her friends and family notice a transformation: she’s more confident, serene, and comfortable in her own skin. “Unfortunately, I think she did not care enough about herself throughout her life,” a friend notes toward the end of the film. “As soon as she started to love herself, she became able to love those around her more.”

What: MFAH streams Against the Current documentary by Óskar Páll Sveinsson
When: Through July
Info: mfah.org/films