Houston couple Kimberly Lanai Daily and Shaquinta Lajuana Lynea Richardson are old-school romantics who know how to make modern technology part of the mix. When the duo first exchanged phone numbers, they were both far from home. Rather than simply texting each other, they penned notes to one another in their respective journals and sent photos of those notes to one another via social media.

The couple first met in October 2018 at an in-person Facebook group meetup called The Unfit Christian Congregation. “The group was meeting at a Mexican restaurant in Atlanta,” says Kimberly. “I booked a flight from Houston to go meet my internet friends in person.” Shaquinta and her best friend drove to Atlanta from South Carolina for that same Facebook meetup. “I knew Shaquinta’s best friend, Chrishele, from the group, but I didn’t know Shaquinta,” Kimberly explains.

But Shaquinta knew exactly who Kimberly was, and that was part of what inspired her to attend the meetup. “When dinner was over, Chrishele urged me to ride with them to an after-party,” Kimberly says. “I obliged, and the rest, they say, is history,”

Kimberly, a Houston native who graduated with a law degree from the University of Texas School of Law, is an energy litigation attorney at Eversheds Sutherland (US) LLP. Shaquinta, who earned a Ph.D degree from the University of Georgia, is now a licensed marriage and family therapist at Building Bridges Family Therapy and a life coach at Beyond Achieving LLC, both of which she owns. The couple currently lives in Manvel, Texas.

Kimberly says that she knew she wanted to marry Shaquinta by the end of their first date, an overnight trip to Asheville, North Carolina that took place about a month after their fateful meeting. Her initial instincts were confirmed after they had been dating for about five months. “We were on vacation in Cancún, and Shaquinta was walking along the beach with this beautiful floral dress blowing in the wind. It hit me that she was everything I ever wanted—and that the next time we visited Mexico, she’d have a ring on her finger. I proposed nine months later,” Kimberly says. 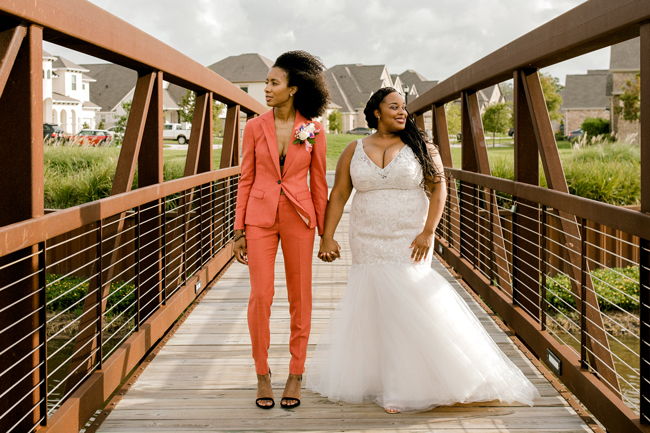 As for Shaquinta, there was one point in July 2019 when she and Kimberly were talking about the future and what that would look like. “Kim said to me, ‘You have worked your whole life to be where you are. I want you to flourish in your career more than I want you to be my wife.’ That’s when I knew I was supposed to marry her,” Shaquinta says.

Kimberly proposed to Shaquinta in December of 2019, a little over a year after the two met. Shaquinta loves Hallmark Christmas movies, so Kimberly planned a Hallmark date day where they went holiday shopping, decorated their Christmas tree, and then went ice-skating. “Then on the way to dinner, we stopped by Shaquinta’s favorite local coffee shop. That’s where I proposed with a wooden writing box filled with her favorite things, including fountain pens, wax seals, and leather notebooks,” Kimberly explains.

Because handwritten notes began their relationship, Kimberly continued the old-fashioned journaling idea by learning to write with a fountain pen. “I selected Shaquinta’s favorite type of paper and created a ‘proposal journal’ with her favorite type of leather notebook cover,” Kimberly says. Once Shaquinta reached the final page, Kimberly got down on one knee and proposed. “She was crying so much that her glasses fogged up,” Kimberly says. “That was awesome.”

Shaquinta says the whole thing came as a complete surprise to her. “I really had no idea what she had planned. She is a romantic at heart, so gestures like that day were not outside the norm,” Shaquinta adds.

The couple was married on July 26, 2020, in their Manvel neighborhood. Danyelle Thomas, the founder of The Unfit Christian Congregation, officiated the wedding. “We always wanted our wedding to be an intimate affair, so it was beautiful having the person we met through be the person to officiate our ceremony,” Kimberly says. 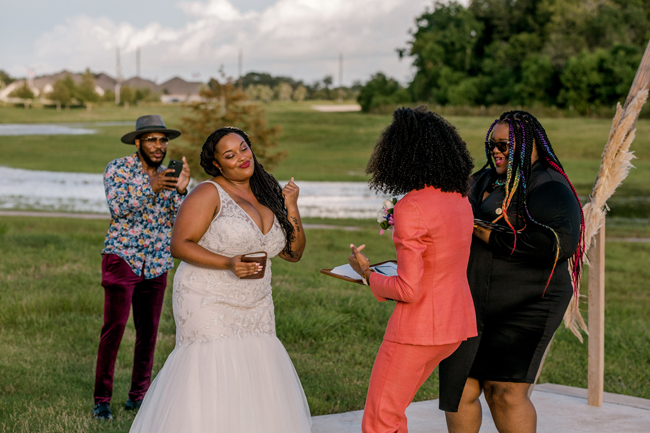 Because they put their wedding together in just ten days, many of their vendors were chosen based on who was available on short notice. “But there was no way we’d choose anyone to participate in our wedding who didn’t love our love. Choosing LGBTQ and LGBTQ-affirming vendors was important to us,” Shaquinta notes. For example, their wedding photographer—Jess, of We the Romantics—“is nonbinary and incredibly affirming of our love,” Kimberly says.

Kimberly had another major surprise for Shaquinta on their big day. “She surprised me with her vows in the form of a rap. She actually rapped the whole thing! It was amazing! She incorporated different memories from our relationship and special references, and everyone got into it. It was so creative and perfect,” Shaquinta recalls.

Due to their work obligations and the pandemic, the couple waited three months after their wedding to honeymoon in Puerto Vallarta, Mexico. “We chose PV because it is a queer-friendly city with gorgeous beaches and beautiful sunsets,” Shaquinta says. “It turned out to be a great choice! We felt very safe, and had an amazing time.”