Season in Hell – Michael Tracy – Painting, Sculpture, and Film 1990–2021 furthers this sense of wonder, as one can’t help but focus intensely on the body of work’s transgressive subject matters, intricacies, and provocative presentations—qualities that often force an impulse in audiences to look (and look back) in a frenzied double-take that concludes with unavoidable captivation. Tracy’s thought-provoking artwork is now on display at Bill Arning Exhibitions in Montrose through June 27.

Tracy is an art-world legend. And during the 1970s, with his career on fire, he exhibited at every major Texas art museum. Now 78, his practice is still relevant, particularly when it comes to contemporary border issues. Currently living in the sleepy border town of San Ygnacio, Texas, Tracy’s relationship to Mexican culture centers around a deep connection to site specificity. With the rise of Donald Trump’s assault on  border politics, Tracy’s work still retains tremendous relevance as it relates to contemporary issues of social justice.

As it relates to this review, his paintings straddle the line between complete abstraction and figuration. Conversely, his exhibited bronze sculptures convey a complex relationship to clarity, although the figures are mixed together, beaten up, weathered with a rustic patina, and composed in a surreal manner that defies straightforward representation while still depicting fairly accurate, if not exaggerated, human anatomy. They are supplemented by fantastical, erotic figures gripped by agony and ecstasy, as well as mysterious references to otherworldly phenomena. The mixed-media work Amor Omnia explores a Mesoamerican prayer ritual in the form of a bewildering book, which combines mysterious imagery with even more mysterious text.

Amor Omnia (1993) depicts a reenactment of a Mesoamerican “prayer,” as Tracy puts it, and is contextualized (or de-contextualized) through mostly illegible text scrawled in primitive, rigid, and angular lettering, as if carved in stone. The title translates from Latin as “Love Is All” and furthers the notion that his works seem lost in time. The work focuses primarily on a singular Latin American man clothed in a mythical manner who is bathed in cracking mud, and carries the limp body of a sacrificial lamb. The progression between scenes mixes ritual with colonial eeriness, as the mostly white onlookers stare perplexed and perhaps even put off. Lacking any punctuation or spacing, a mode that’s loosely in line with Tracy’s own writing style, the accompanying text is suggestive of a dreamlike progression, syncing up with the imagery in a cryptic way.

Presented as a cohesive quartet, his painting studies for the Hindu goddess Devi embody her divinity without directly depicting bodily form. They tend toward complete abstraction, and defy straightforward representation as she dissolves into a barrage of heavenly color. Arning notes that its inclusion in the exhibit relates to the old-school connection between gay culture and goddess worship. It also highlights the diversity present in Tracy’s work, while still remaining conceptually consistent.

His brutally imposing bronze sculptures, perhaps the most erotic part of the exhibit, gracefully fuse Surrealism and harsh conflict (seemingly both internally and externally), some with a particularly nightmarish quality. And to reinforce the notion that his practice is deeply steeped in contradiction, as his studio manager Chris Rincon puts it, these sculptures are both “gentle and violent, but they all express urgency and passion.” The title of the sculptural centerpiece War Campaign Parade of Busts, Heads, and Juggernauts, Presided Over by a Pair of Candelabras Dedicated to the Baroque Master Pergolesi (1998-2000) describes its subject matter in a straightforward yet verbose way that is typical of Tracy’s maximalist use of language. He describes their inspiration and formation as “beginning simply [as a series of constructed] busts [that then transitioned] into wagons.” They include multiple components that contort and overlap one another, forming a unity that recalls something mythological. Homoerotically subversive, they rightfully demand undivided attention.

Tracy’s work is unapologetically transgressive. It’s both uncanny and inviting. It asks you to think, instead of telling you what to think. It doesn’t pander, it doesn’t preach, and it’s sublimely universal. Enter his void and descend. 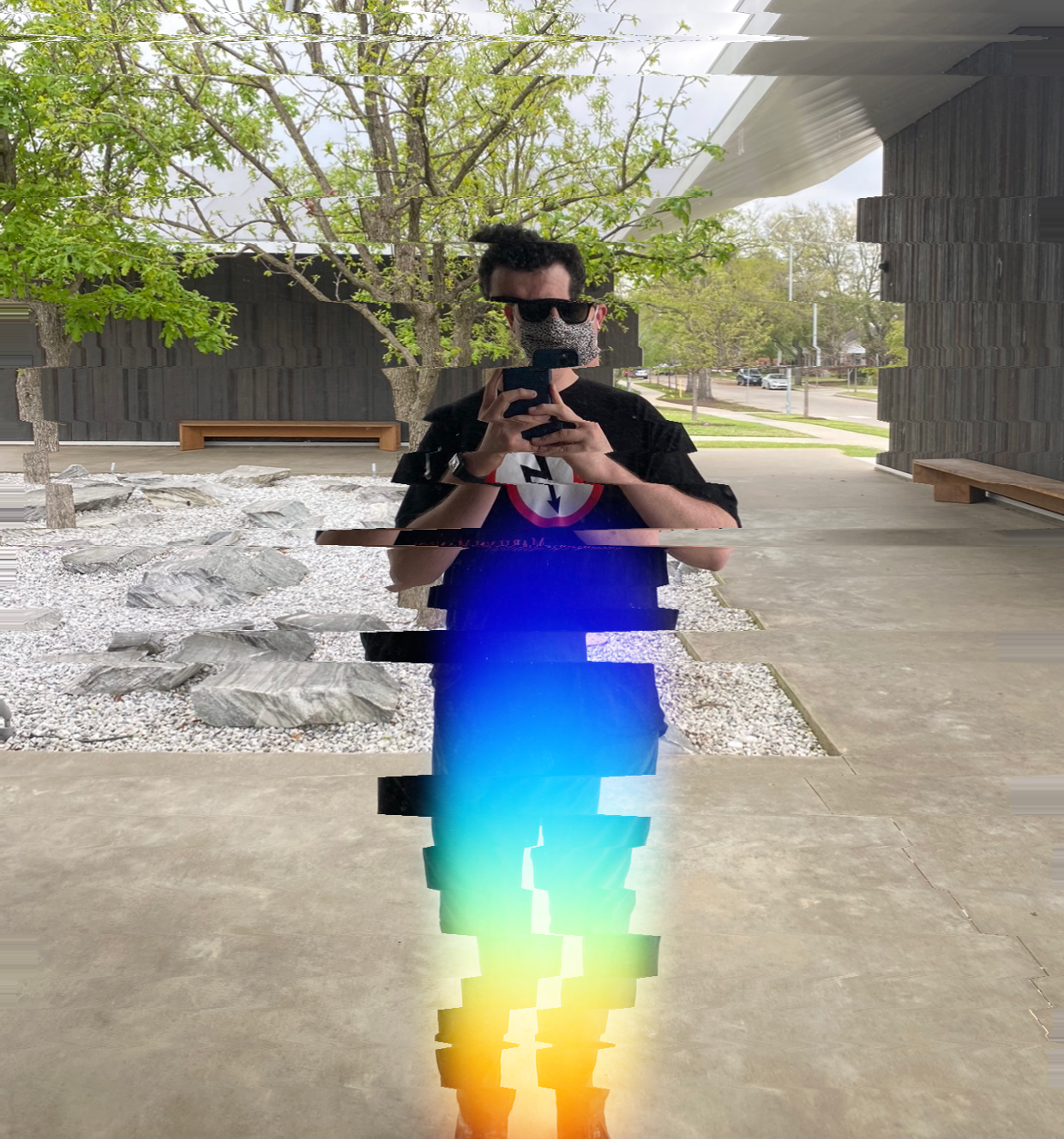 Joseph Staley is a writer, curator, artist, and art historian based in Houston. Formerly the Executive Curator of Glade Glade Gallery in The Woodlands, he curated a multi-faceted yet cohesive range of exhibits, part of which explored LGBT+ culture, and in 2019 he received the Courage Award from The Woodlands Pride Festival for highlighting this theme in a particularly conservative part of the state. His art historical scholarship focuses on the degree to which Pop Art reenacted and perhaps remediated cultural American traumas, but it also pays close attention to the community-building coalitions present in AIDS activist art, particularly of the 1980s and 90s. His curatorial, art historical, and artistic methodology relates specifically to the idea of a double-take: that through theoretical filters, intensive research, nuanced and subtle compositions/subject matters, and frankly, a tinge of brutal honestly, we view a concept, apply those methods, look back at it, and its context is unequivocally altered.