A transgender woman was murdered in West Houston on April 23, according to the Houston Police Department (HPD).

Iris Santos was shot and killed at approximately 9:30 p.m. on Friday, April 23, in the 8600 block of Westheimer Road, according to a Twitter post by Officer Jo Jones, HPD’s LGBTQ Liaison. An online flyer created by HPD states that Santos was sitting at a picnic table when an unknown suspect approached and opened fire, striking her. Santos died as a result of the gunshot injuries sustained during the shooting. 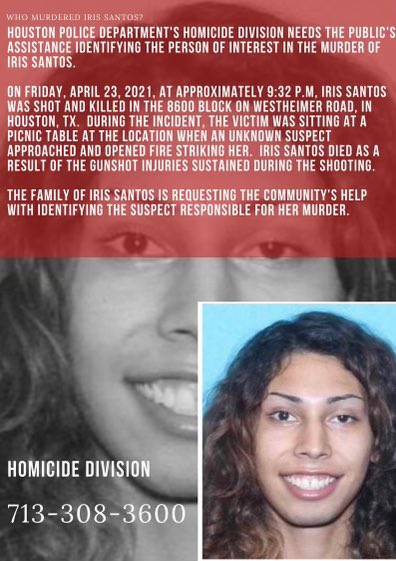 Santos is at least the 18th trans or gender-nonconforming person to be murdered in 2021, according to the Human Rights Campaign. The vast majority of the victims, including Santos, have been trans women of color.

Santos’ family is requesting the community’s help with identifying a suspect responsible for her murder.

Anyone with information on Santos’ murder should call HPD’s homicide division at 713-308-3600.

This is a developing story. This post will be updated as additional information becomes available.