Love at first sight may be a cliché, but once in a blue moon it actually happens. It certainly happened for Dalton Holdge, a senior engagement consultant at Cigna, and his husband, Derek Smith, a nurse practitioner for Houston’s Crofoot MD practice.

While the couple met in Atlanta, Dalton, 30, is originally from Fort Cobb, Oklahoma, and Derek, 37, is from Danville, Ohio.

Derek says he knew he had feelings for Dalton from the moment they met on the dance floor shortly after midnight at an Atlanta New Year’s Eve celebration in 2016. “From the moment I met Dalton, I had a feeling it was going to be for the long haul,” he says. “That first night, he made me feel all the things you want out of a ‘partner in crime,’ and he hasn’t stopped since.”

But it was on a gay cruise at the ship’s Dog Tag Party that they knew it was love. Each guest had to choose a colored sticker to wear (green for available, yellow for maybe, and red for taken). “I was extremely stressed at what color he was going to pick, as we just started talking and I knew then and there he was going to be a ‘Red Dot Mine’ kind of guy. I gave him a red dot for his dog tag and gave him a collar and lock, showing him that I wanted him to be mine and I wanted to be his,” Dalton says. 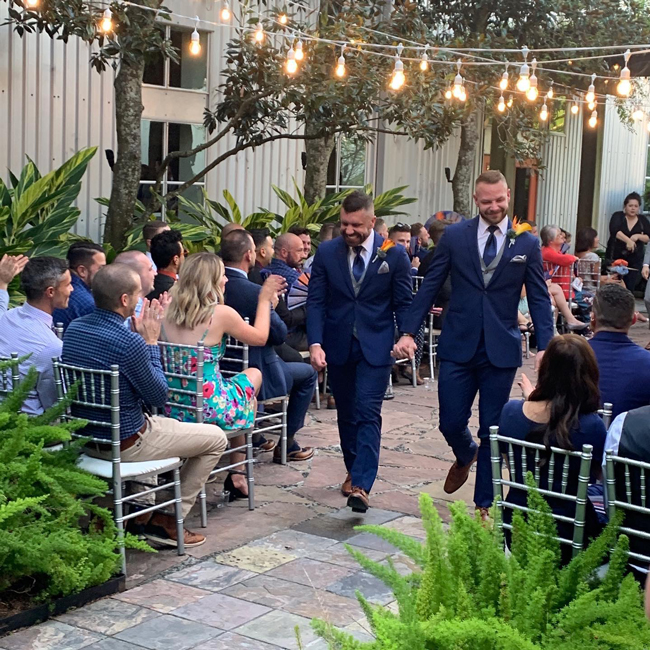 Even though that was early on in their relationship, Dalton says he knew Derek was someone he wanted to take care of for the rest of his life. So, he proposed to Derek on the beach in Pensacola, Florida.

When the couple travels with their best friends, they always make sure to take a souvenir group photo. While they were taking the photo during that Pensacola trip, Dalton pulled Derek to the front of the group and proposed to him so the moment could be shared with their friends. “Derek was anxious because he didn’t realize what was happening,” Dalton says. “He thought I was getting in the way of everyone’s pictures! He of course said yes—after he realized what was happening. Thank goodness!”

The couple was married on October 5, 2019, at the 5226 Elm events venue in Houston. One of their best friends, Steven Adams, officiated. “We chose the venue because it was gorgeous and indoor-outdoor, and we chose Steven Adams because he can keep a crowd’s attention,” Dalton says. 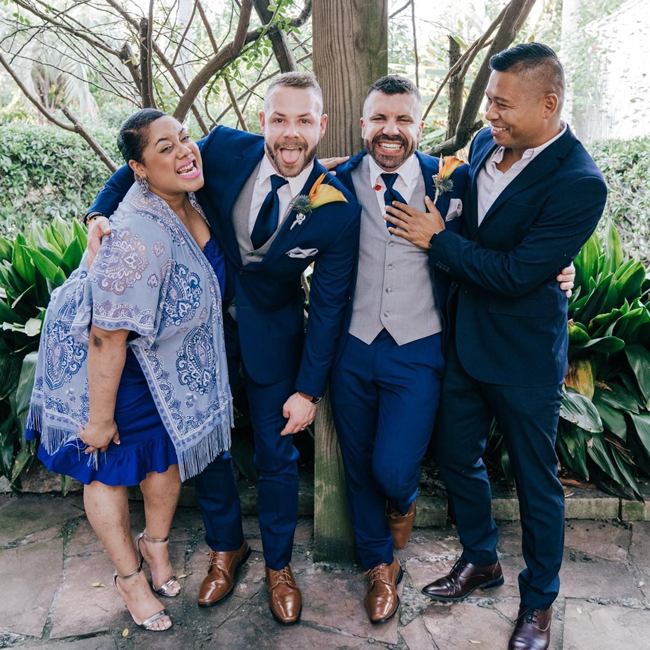 Dalton and Derek decided from the start to favor fun over tradition and make the wedding truly feel like “them” as a couple. “It made the process less stressful and more enjoyable, rather than trying to fit a specific mold,” Dalton says. “Hopefully, we started a custom of wedding parties riding inflatable unicorns for their entrance.”

However, there was one snafu during their planning. Less than a week before their wedding, a rogue employee of their florist took all of their designs and supplies. Luckily, their wedding planner stepped in to assure a quick redesign and execution. “Make sure you have a great wedding planner,” Dalton advises.

Having their moms walk them down the aisle and seeing their birth families there supporting them in front of all of their chosen LGBTQ family was a highlight of the day, the couple says.

The duo also wanted to use LGBTQ vendors in an effort to support the queer community. Their photographer, venue, and wedding planner all identified as LGBTQ. “Our wedding planner was most helpful in providing us direction [based on] their experience with other gay couples and the vendors they used,” Dalton says. “The venue allowed us to use any vendors we wanted [so we could] feel comfortable with our choices, and not be pressured into a wrong fit.”

For their honeymoon, Dalton and Derek went to Berlin, Germany. “We took a train to Prague for a few days, then spent the last leg back in Berlin to see the start of their Christmas Village,” Dalton says. “We have always wanted to go, and glad we did it before the pandemic.”

To this day, Derek describes Dalton as having “a hard-candy shell and a sweet center. He’s passionate about everything he is a part of. He tells you how it is, and motivates me to achieve what I doubt. Oh, and he gives the world’s best cuddles.” And Dalton says that Derek amazes him every day with the care he provides to his LGBTQ patients. “I am so lucky to have married him, because when I’m stressed or anxious, all he has to do is hug me and the weight is lifted.”