John Papagiannopoulos, 52, Brandon Bartee, 42, and Geno O’Quinn, 49, have identical tattoos on the inside of their left wrists. It is an image of three hearts, interconnected, each a different color—orange, green, and blue—to represent themselves, their relationship, and the life and love they share together.

Bartee explains how those three tattoos—and the three Houston men’s poly-faithful relationship—came about. “When my ex-partner of eight years and I separated, John sent me a picture of three white hearts. At that time, it was just a friendship thing,” Bartee says. The two decided to get tattoos that were a colorful version of Papagiannopoulos’ white hearts.

O’Quinn, who was single at the time, met Papagiannopoulos and Bartee while they were still in their respective relationships. The three friends grew closer over time, and supported one another as those relationships ended.

“I love them both equally, but in different ways and for different aspects.”

Bartee still recalls the moment when things took a more serious turn. “I had a 450-square-foot apartment that Geno would stay at, even though he had a townhouse. When John separated [with his ex], he asked if he could stay there more. One night, we were all watching a TV show on the sofa, all cuddled up, and I said, ‘This feels like home.’ That was six years ago on February 21.”

“We were already in love with each other,” O’Quinn adds, “but I think when John’s relationship ended and Brandon was no longer with his ex, it kind of connected one day for all of us. We knew [our relationship] felt comfortable—that it was home.”

Queer people are generally more open and accepting of relationships that may not reflect the heteronormative images that society proscribes when it comes to romantic love. Although polyamory—relationships consisting of more than two people—may not be widely understood or even accepted, the root of those relationships is grounded in the same values that any loving relationship requires. 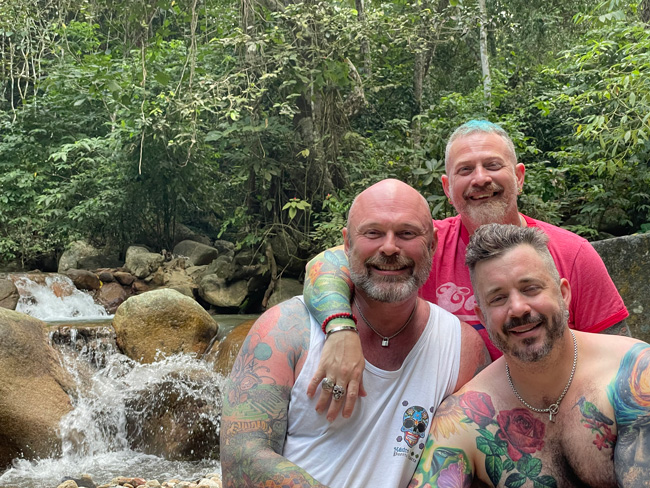 While the throuple cannot legally marry, the men wear wedding rings and refer to themselves as husbands—in the same way that committed male couples used the term in the days before same-sex marriage was legal. Through a combination of marriage and adoption, the three hope to one day become a “legal” family.

“Our relationship is poly-faithful,” explains Bartee, “but the trouble we get into we do together, and we have rules: don’t lie, don’t cheat, be honest. And if you do something you’re not supposed to, be up front and ask forgiveness.”

One thing that the trio agrees can’t be a part of their relationship is jealousy.

“We all have our alone time, and we all have together time. You can’t get jealous because the other two are cuddled up and you’re not involved. You have to step back and appreciate the bond that they have, because the bond they have is the bond you have with each of them,” says Bartee.

Like the three different heart colors in their tattoos, these men have personalities that are quite distinct. Fortunately, their unique characteristics complement each other. “John and I have the whole nerd factor in common, whereas Brandon and I have the spontaneity and craziness,” O’Quinn explains. “Brandon also helps bring that out of me and John.”

Papagiannopoulos agrees. “All three of us bring something that the others help temper. I am non-confrontational and laid back. I don’t want to get anyone riled up. Brandon is a little more energetic. And Geno, as the Libra, is the balancing force between the three of us.”

Or to put it more bluntly, Bartee notes that “you have the pacifist, the aggressor, and the glue.” 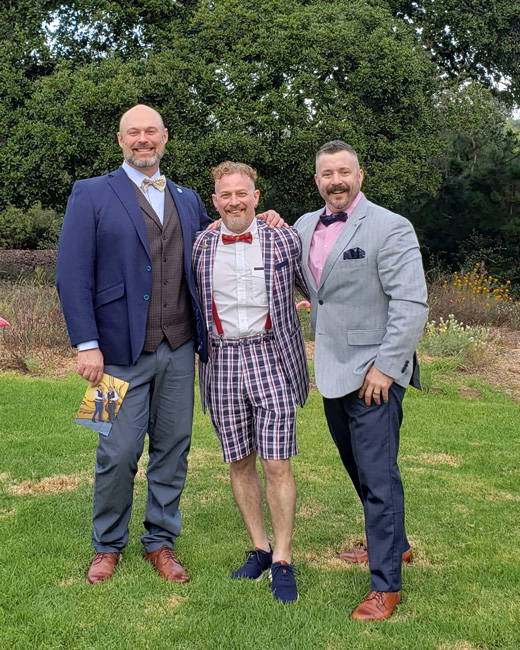 The three men allow each other to be entirely themselves, and it shows through. They all share some interests, of course. They are very involved in the leather and kink community, but they also have their own unique passions that might seem unexpected. For example, Papagiannopoulos has an extensive Barbie collection and O’Quinn has an unwavering love for Wonder Woman. Bartee’s unique passion is being a people person.

“Brandon is the spontaneous one,” says O’Quinn. “We went to Montreal for Gay Pride and saw a leather group there and started talking to them. Because Brandon is so spontaneous, we got to march with the group and hold the leather flag in the parade. If it hadn’t been for him, that adventure would not have happened because I’m more reserved and quiet when I’m around people that I don’t know.”

The men’s families all seem to recognize that the love they have for each other is healthy and good. “Everyone has been very supportive. I haven’t had any friends, or clients, or anybody in my life express anything but support for our relationship,” Papagiannopoulos says.

“If there have been any objections, they haven’t let us know,” O’Quinn adds. “After I brought John and Brandon over to meet my mother, I told her that I wanted her to know that I am dating both of them. She said, ‘I have Facebook. I’m not stupid.’ That was it!”

Bartee’s experience with his mother was especially affirming. “When my dad passed away, my mom called and said, ‘I have a question. How do you spell John and Geno’s last names, so I can put them in your father’s obituary? It’s the first time I have seen you happy and in a relationship that I know will last,’” he recalls.

But no matter how other people view the poly-faithful trio’s relationship, these men know that the thing that centers them is love. O’Quinn puts it best: “I love them both equally, but in different ways and for different aspects.”