The Houston Police Department (HPD) has had a dedicated liaison to the local LGBTQ community since 2014. That position, which was created to streamline communication between activists and police, is now held by HPD senior officer Josephine “Jo” Jones, a member of the LGBTQ community who has held the position for the past year.

The U.S. has had a significant history of LGBTQ people being mistreated by law enforcement, including profiling, entrapment, discrimination, and harrasment by officers, according to the most recent survey by UCLA’s Williams Institute. This has undermined effective policing by weakening the community’s trust in local police officers.

“There is a history of police not respecting the LGBTQ community. Finally, the Stonewall riots in New York City gave rise to a movement,” HPD Chief of Police Art Acevedo says. “We want to send a message to our workforce that we will ensure an interest in the priorities and concerns of the LGBTQ community. And that is why I think it’s important to have [Jo Jones serve as] a liaison who can be the eyes and ears for the department.”

Jones was born in Sealy, Texas, in 1976, and spent her early years in Belleville. She was living in Giddings during her high school years, and was an all-around athlete who excelled in basketball, volleyball, and track. Her father was a minister, and her mother worked in state facilities for the mentally challenged. She was the “middle” child with two brothers and two sisters.

In high school, Jones dreamed of military service and becoming a member of the military police. “I’m a rule follower,” she says, “and police are there to enforce rules.” She looked up to members of law enforcement, and felt they were there to help people. 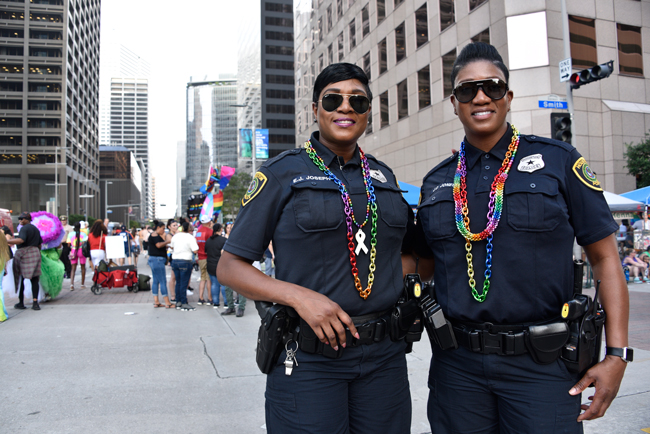 Jones enrolled in Blinn Junior College to complete her basic undergraduate coursework and play basketball. She then moved to Houston to enroll in the criminal-justice program at the University of Houston’s downtown campus. She joined the Houston YMCA and began working with their family programs. After graduation, she was appointed director of the YMCA’s local family programs. “It molded me into who I am today,” Jones says. “I learned to work with people—understanding them and being tolerant.”

In 2006, Jones applied to the HPD and was accepted into their 189th cadet class. After that six-month training program, she began working a regular beat. She asked for an assignment in Southwest Houston because that is where her older sister, EJ Joseph, already worked as an officer. “I learned how to read a Key Map really quick,” she recalls.

Jones was eventually assigned to HPD’s Midwest station, which was added in 2008 to provide better coverage in the Sharpstown Mall area. In 2012, she began to work as an HPD recruiter.

Last year, HPD’s LGBTQ liaison position came open, and Jones applied. She was already aware of the job because her sister Joseph, who is an LGBTQ ally, had been the first person to hold that position. Jones was chosen for the job.

She is also a member of the HPD LGTBQ employee group LEAP (Law Enforcement Alliance of Pride), where she plans social events for members and organizes a contingent of officers to march in Houston’s Pride parades.

One of the most difficult parts of Jones’ job is dealing with the crisis of violence against trans women of color. She is currently working with the family of Asia Foster, who was murdered in December. One of Foster’s best friends was 22-year-old Tracy Single, another Black trans woman, who was killed in July 2019. Through tips from the community, a suspect was apprehended during the Single investigation.

Jones says it is vital for HPD to work with community activists like Dee Dee Watters and the late Monica Roberts in murder investigations. “We are doing all we can to bring justice. We need a police presence that tears down the barriers that people think are there. We need to change the narrative and spread the word. Education is needed to repair those broken lines of communication. I love my trans community and the activists I work with.”

Jones says her job entails “being available, and being out there.” She often participates in networking events and accepts speaking engagements at neighborhood meetings. She is available at any time to speak with anyone in Houston’s LGBTQ community who has an issue to discuss. Her HPD office number is 713-308-3257.

Another part of her job is to coordinate training sessions for every HPD cadet class. She puts together panel discussions with various local LGBTQ activists, and Lou Weaver teaches sessions on the trans community that include a full explanation of the LGBTQIA+ acronym. Cadets learn to avoid misgendering trans citizens by using only their preferred names and pronouns.

Additionally, cadets visit the Montrose Center to learn  about the many activities and programs provided there. That field trip even includes a stop at the Houston Eagle Phoenix Room, where cadets view the wall murals that feature decades of LGBTQ community history. 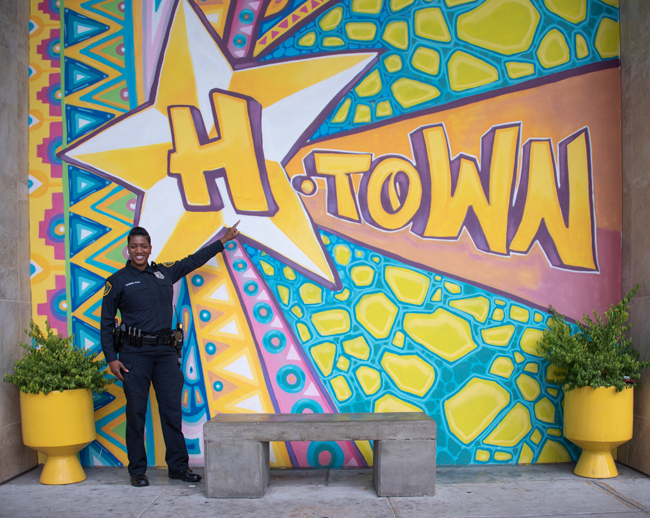 These cadet classes are produced by the HPD Public Affairs office, and include overviews of all the communities that Houston police protect—Indian, Asian, Muslim, Hispanic, LGBTQ, and others. The multicultural classes include speakers such as the ambassador from the South Korean Consulate on Post Oak Boulevard.

Jones says one of the most common ways that HPD officers interact with citizens is through traffic stops. The HPD officers are taught how to treat each person they deal with respectfully, and to realize that using correct names and pronouns can make interactions less confrontational.

Weaver is quite pleased with Jones’ work with Houston’s LGBTQ community. “I think it’s fabulous that we have a dedicated officer. She has introduced herself to our community leaders and reaches out to us. We have an open line of communication. She works with all the other departments, so HPD cadets and officers are meeting queer people every step of the way.” Weaver recently worked with Jones in an HPD class on domestic violence that included same-sex domestic violence scenarios.

HPD Sergeant Alexa Magnan, an out lesbian who was the second officer to hold the HPD LGBTQ liaison position, notes that even if LGBTQ citizens have no idea who the community’s HPD liaison is, they will probably benefit from the liaison’s work if they ever interact with an HPD office and find that it is a positive and respectful encounter.

For more information on the HPD, visit houstontx.gov/police.


This article appears in the January 2021 edition of OutSmart magazine.