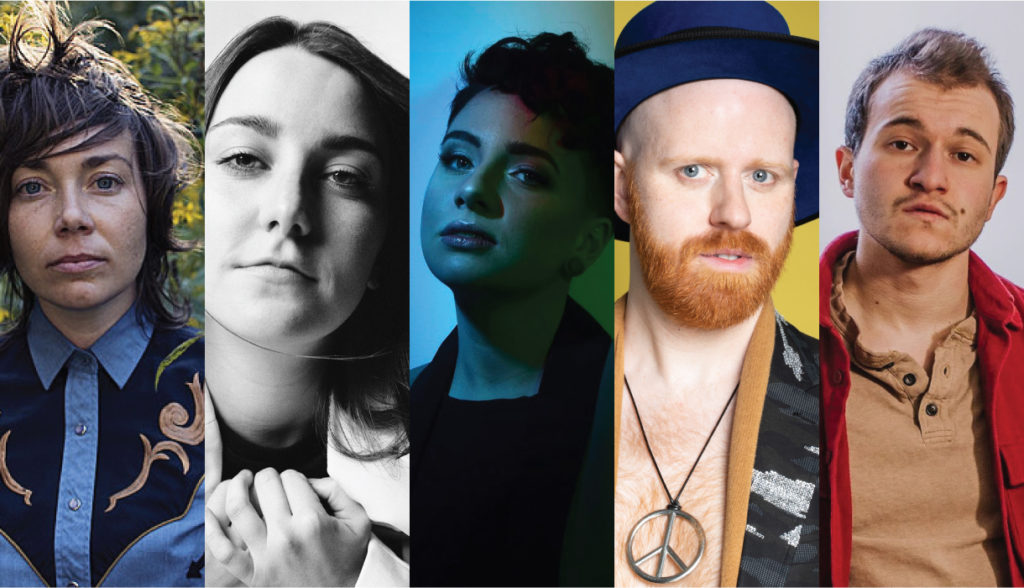 In more ways than anyone would care to count, COVID-19 has changed the way we live. Near the top of the list are the ways in which we experience music. Live music venues—from concert halls and intimate clubs to festivals and cruises—were hit the hardest in 2020, and the future of these performance spaces remains uncertain.

Fortunately, we still have plenty of recorded music to enjoy while we face the possibility of both an effective vaccine and further lockdowns. Some LGBTQ musicians used their year of isolation to create noteworthy albums that you can check out here:

Gay smooth-jazz musician Dave Koz has the wonders of virtual-meeting technology to thank for his A New Day (Just Koz) album, written and recorded with the help of several socially distanced guest artists.

Bay Area-based lesbian singer/songwriter Rachel Garlin hasn’t been sitting idle during the pandemic, either. She released her new Julie Wolf-produced album, Mondegreens (rachelgarlin.com), as well as her weekly Sidewalk Sessions—live performances streamed from the garage of her Noe Valley home.

Scott Free wrote “This Is Not Our Government” during the lockdown, making it a last-minute commentary on the CARES Act that he added to his politically-oriented The Last Revolution (Leather/Western) album.

Lesbian artists excelled in 2020. The Greatest Part (Captured Tracks), the breathtaking second album by out singer/songwriter Becca Mancari, available in a limited-edition clear-pink vinyl LP version, is a sonic departure from her Americana-laced 2017 debut Good Woman. Working with musician/producer Zac Farro (of Paramore fame), Mancari created a forward-thinking audio landscape for her deeply personal lyrics, some of which deal with surviving a strict religious upbringing. Songs such as “Hunter,” “Stay With Me,” “First Time,” “Like This,” and “Tear Us Apart” deal with heavy subject matter, but the unique musical settings have the ability to transport the listener to another place altogether.

North Carolina-based H.C. McEntire also released an exceptional second album, Eno Axis (Merge), which expands on the promise of her first record, delivering 10 awe-inspiring songs (including the instrumental “Sunday Morning” and a stunning reinterpretation of Led Zeppelin’s “House of the Holy”).

Queer singer/songwriter Gordi (aka Sophia Payten) also has a sophomore album. Her gorgeous Our Two Skins (Jagjaguwar) ranges from the soul-baring opener “Aeroplane Bathroom” to the early Rickie Lee Jones-esque “Radiator,” as well as “Look Like You,” “Volcanic,” and the livelier “Free Association,” “Unready,” “Sandwiches,” and “Extraordinary Life.”

Newly out singer/songwriter Jaime Wyatt is a distinctive artist who led a hardscrabble life before getting sober and embracing her queer identity. She addresses these subjects on her exceptional new album, Neon Cross (New West), which has rightfully earned her a place among the current crop of reigning country divas.

Singer/songwriter Susan Werner is a national treasure, which she continues to prove with each new album. Her latest, the Americana-style Flyover Country (susanwerner.com), gives us many things to think about over the course of its 10 songs, including “Snake Oil,” “Only Later,” “Barn Radio,” “How Much,” and “Wine Bottles.”

Coming out has been popular during the pandemic. Maria McKee’s first album in more than a dozen years, La Vita Nuova (American Fire), fittingly translates as New Life. Best known as the lead vocalist for the ’80s cowpunk band Lone Justice (“Ways to Be Wicked” and “Shelter”), McKee has had a decent solo career (and hit single “Show Me Heaven”) with both major-label and independent releases. She also wrote songs covered by Bette Midler (“To Deserve You” and “The Last Time”) and Feargal Sharkey of The Undertones (“A Good Heart”).

Brittany Howard, the magnetic and supremely talented former lead singer of the Grammy Award-winning band Alabama Shakes, came out, got married, and released her solo debut album Jaime (ATO), named for her older sister who died at the age of 13 (when Brittany was 9). The 11 songs are everything you’d expect from a Brittany Howard solo album, and then some.

Singer/songwriter Cidny Bullens actually came out as trans in 2012 following a lengthy recording career as Cindy Bullens. The powerful personal statement Walkin’ Through This World (Blue Lobster) is Bullens’ 2020 debut album as Cidny.

The compelling songs on Indistinct Conversations (Saddle Creek) are said to be inspired by Elizabeth Powell, the lead vocalist with the Canadian band Land of Talk who came out as a nonbinary femme.

Recorded in late 2016 but not released until 2020, Nobody Cries Today (mattlovellnusic.com), the brilliant debut by Southern gay singer/songwriter Matt Lovell, was well worth the wait. Lovell’s powerful and expressive set of pipes delivers an album of original, soulful, and country-influenced tunes that are worthy of repeated listens, including the knockout tracks “90 Proof,” “Be Free,” “Alligator Lily,” “The Way That It Was,” and a pair of duets with Leigh Nash—“The Gospel” and “Dime Adios.”

Father (izzyheltai.com), the debut album by trans singer/songwriter Izzy Heltai, has a powerful Jeff Buckley-like voice that gives his songs the necessary passion to convey their messages to listeners—as you can hear on “Marching Song,” “To Talk About Yourself,” “Songbird,” and “Anyone to Anybody.”

Pass Like Pollen is the debut album by nonbinary trans-masculine singer/songwriter Cartalk, aka Chuck Moore. It plays like a hybrid of modern twang and vintage grunge with a general indie rock vibe, which  works well on “Noonday Devil,” “Las Manos,” “Driveway,” and “Sleep.” “Wrestling” and the folksy Elliot Smith-like “Something or Nothing” park themselves in the space reserved for irresistible pop music.

Expectations (Rounder), the debut album by young lesbian singer/songwriter Katie Pruitt, is an admirable introduction to a talented artist—especially for fans of Brandi Carlile and the aforementioned Becca Mancari. Pruitt’s extraordinary and commanding vocal abilities, as well as her way of drawing in the listener with her personal lyric style, are exemplified on the amazing “Georgia” (“There is a place past the Georgia pines/With people who welcome you with an open mind.”) as well as “Normal,” “Loving Her,” and “It’s Always Been You.”

Young, queer Scottish-Canadian singer/songwriter Evangeline Gentle made an indelible impression with the eponymous debut album Sonic Unyon, which strikes the right balance between personal love songs (“Sundays,” “Long Time Love,” “Neither of Us”) and universal observations (“Ordinary People,” The Strongest People Have Tender Hearts”) and the lightly twang-tinged tune “Even If.”

Almost everything you need to know about gay singer/songwriter Kyle Motsinger (a self-described “theater queen who loves his pop”) can be found in the title track to his debut album Any Way I Want To (kylemotsinger.com). First he explains, “My music sounds any way I want it to,” and then he goes on to say, “My voice sounds different than the other boys. It’s not a sound that everyone enjoys.” But it’s a voice that suits him well.

If you’ve ever wondered what it might sound like if David Sylvain (of Japan) fronted Prefab Sprout, your answer can be found on the soaring Flight by Tenant From Zero (aka queer Brooklyn musician Paul Darrah), a 21st-century reimagining of the best of ’80s Brit-pop.

Fiddler and banjo player Jake Blount, described as “one of the few queer Black voices in Appalachian music,” called his pandemic album Spider Tales (Free Dirt) and proceeded to spin an elaborate and beautiful web with this reclamation project. He adds a distinctly queer perspective to many of these early- to mid-20th-century tunes, and his take on Lead Belly’s “Where Did You Sleep Last Night?” is particularly dazzling.

L.A.-based quartet Girl Friday’s brilliantly titled Androgynous Mary (Hardly Art), with a cover photo depicting what can be best described as an old-school butch, merged Riot Grrrl sensibilities with those of groundbreaking acts such as The Raincoats and Kleenex/LiliPUT.

Gay modern-rock legend Bob Mould is among the hardest-working men in music.  He proved that point in 2020 by following up on 2019’s aptly titled Sunshine Rock with the somewhat bluer Blue Hearts (Merge). Blue in terms of sexual content (check out “Leather Dreams”) as well as in the liberal political messaging in songs such as “American Crisis,” “Next Generation,” and “Heart on My Sleeve,” all delivered in his trademark crunchy and blazing guitar rock style.

Still going strong after more than 35 years, Indigo Girls returned in 2020 with their first studio album in five years. Look Long (Rounder) continues the musical tradition that Amy Ray and Emily Saliers established all those years ago—a blend of modern Americana pop (on the title tune, “Country Radio,” “When We Were Writers,” and “Sorrow and Joy”) and memorable rockers including “Change My Heart,” “Shit Kickin’,” and “Favorite Flavor,” all with an eye for social commentary.

Rufus Wainwright took even longer—12 years!—between his albums of original pop music, but thankfully Unfollow the Rules (BMG) does not disappoint. He sets a political tone with the opener “Trouble In Paradise,” and echoes that in “Only the People That Love.” Wainwright doesn’t skimp on operatic excess in the dramatic “Early Morning Madness” and “My Little You,” but then he adds a dash of hopefulness (and even humor) on the songs “You Ain’t Big,” “Peaceful Afternoon,” “Damsel in Distress,” and “Alone Time.”