Openly gay rabbi Gideon Estes is aware that religious institutions have harmed many members of the LGBTQ community. That’s why he leads Houston’s Congregation Or Ami with a queer-affirming focus.

“I try to help create space for people to see the [positive force] that organized religion can be if someone freely chooses it,” says the 39-year-old Jewish scholar. He has helped organize queer-affirming programs at Houston Hillel for students and young professionals, participated in Pride prayer services, and is an active member of the LGBTQ organization Keshet Houston.

In a more general sense, he says, “I look for ways to be welcoming to members of our community at the synagogue, and speak in community forums to show how religion can be affirming and celebratory for the LGBT community.”

“I try to help create space for people to see the positive force that organized religion can be if someone freely chooses it.”

This holiday season, Congregation Or Ami is hosting a few programs for Hanukkah, the Jewish Festival of Lights that takes place December 10 through 18. The logistics for these events are still in the works, but Estes plans to host a socially-distant celebration called Menorah Madness on December 17.

“We are still working on the details,” he says. “Additionally, we are planning a Hanukkah Havdalah over Zoom with our religious school’s families on December 12.” 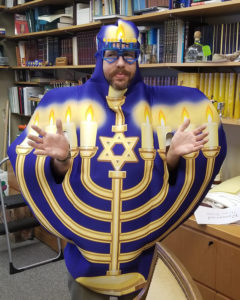 Estes grew up in the San Francisco Bay Area, and after his sophomore year in college decided that being a rabbi was what he wanted to do for the rest of his life. His epiphany came during a summer program at Camp Ramah, which sponsors an intensive six-week Jewish Study Program for 18- to 26-year-olds. “It was my first time truly living my life to a Jewish religious rhythm, and I loved it,” he recalls.

One Shabbat afternoon, Estes was looking out on a hill filled with kids sitting in circles, all studying the same Jewish texts. “I was moved, and resolved to God then and there that I wanted to dedicate myself to [becoming] a rabbi. That was my eureka moment.”

Estes began working at Congregation Or Ami in July 2010. “This congregation is a great fit. I was worried when I  decided to come out five years ago. I thought I might lose my job. Instead, I was greeted with love, acceptance, and celebration. Congregation Or Ami is a community that welcomes all people, no matter how they identify. I also want to say that the Jewish community in Houston is very welcoming and affirming.”

He is very passionate about his work, and about the traditions and values of Judaism. “I love teaching and talking about it. I can talk about it for hours.” Because of being a congregational rabbi, he also enjoys interacting with people in many different contexts. “I enjoy being able to listen to people and accompany them on their spiritual journeys, or give support in their times of struggle.”

The one thing Estes wishes more people knew about Judaism is that it celebrates and encourages curiosity. “We are a people who thrive on questions both big and small.” He also likes to remind people that a rabbi is not an intermediary between people and God. “A rabbi is a teacher who shares knowledge with others.”

He also emphasizes that Judaism is not simply another religion. “There is also an ethnic and cultural aspect. A lot of this is shaped by our history of being persecuted. However, it is also a beautiful thing.”

Estes admits that loneliness is one of the biggest challenges he faces as a single rabbi. It’s a common issue faced by unmarried clergy. “One needs to maintain distance with one’s community on some things. At times, that can be hard. However, the rewards are worth the challenge.”

Additionally, Estes notes that being a rabbi means taking on a huge responsibility regarding pastoral work. “A clergyperson may conjure up people’s fears or wants in relation to God. I do not take that responsibility lightly.”

When it comes to the challenge of thriving as humans—even in the current political climate of hatred and division—Estes believes we need to put first things first.  “Remember to breathe and practice gratitude. If we find things to be thankful for every day, it will lead us to feeling better.”

Another important step, Estes explains, is to take care of ourselves. “Rabbi Hillel, a sage from the first century CE, would teach that ‘if I am not for myself, who is for me? But if I am only for my own self, what am I? And if not now, when?’ This teaching [from the Pirkei Avot] reminds us that we need to advocate for ourselves [as well as to] be concerned for the broader world.”

As for the future, Rabbi Estes is certainly open to the possibility of romance at some point. “If you know any nice Jewish guys who like Jewish guys, feel free to play matchmaker,” he laughs.

For more information on Congregation Or Ami, visit oramihouston.org.