Sharing a famous last name garnered R. Lee Ingalls lots of questions about his relationship to the children’s book author Laura Ingalls Wilder, best known for her Little House series. The only glitch was that he didn’t know a thing about Laura, who was his great-grandfather’s cousin.

“When I was in grade school, one of the kids asked me if I was part of the Ingalls family from Little House on the Prairie. I didn’t know, so I asked my mother. She said, ‘Yes, in fact you are,” he recalls. “It planted the seed that I would one day write a book [like she did].” 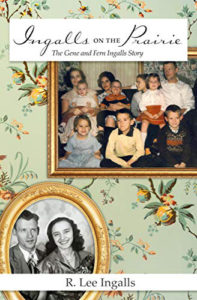 He has followed through with that commitment, and Ingalls on the Prairie: The Gene and Fern Ingalls Story is now available for purchase online.

The original Little House story is a multi-book series based on the elder Ingalls’ childhood in the Midwest, with a chronology that starts in 1870. It spurred stage and screen adaptations, but is most widely recognized as the television series that aired from 1974 to 1983. Lee Ingalls’ book picks up as a continuation of his family’s history from 1929 to 1972.

“[People] wonder what happened with that family. Well, we’re still here, so that’s part of why I wrote the book. I thought it would answer those questions for people who grew up with the books or the TV series. We’re still part of the fabric of America and living as everyday people, just like my ancestors did in her time,” Ingalls adds.

Lee Ingalls’ book covers the story of his parents, Gene and Fern, as they raised a family in the Midwest during the ever-changing American landscape of the 1950s and ’60s. The book offers a short history of his parents’ ancestors, their own childhoods, how they met, and finally their marriage that resulted in bringing eight children into the world. From the time they were wed until their older children began to leave home, they experienced more tragedy and happiness than most couples do in a lifetime.

Ingalls says the book is ultimately about the story of his parents’ dedication to each other.

“The one thing my mom and dad were known for was their love for each other. They were very committed to each other. They had some hiccups in the road, just like every other couple, but their love was a constant in their life. It’s a love story, but from a different perspective,” he says.

The book took nearly a year to complete, and it was officially finished last month. After retiring from a 36-year career at AT&T, and spurred on by the down time that COVID-19 provided, Ingalls was able to complete the book this year. It didn’t come without its complications, though, as his mother had to assist him in recalling some murky memories from his childhood.

“In the [characters’] early years, I kind of knew the story line but not the details. I’d write a chapter and send it to her. Then she’d take a few days to review it and make her notes. We’d talk, and I’d correct my story line,” he explains. “It took quite a while because she doesn’t have anything electronic; everything was hardcopy. It’s easier for her to make her notes that way.”

Ingalls has plans to publish more books, and he hopes his second book will carry on the family tradition of documenting more of an autobiographical history.

“Laura Ingalls Wilder wrote her first book when she was one year younger than I am. There was nothing about her family that stood out from any other family at that time. The difference is that Laura documented it. We were able to get a glimpse of what it looked like for regular Americans during the late 19th century. It’s an extraordinary period in our nation’s history,” Ingalls says. “My story will be similar—a gay kid raised in the upper Midwest, and the struggles we had.”

Like his famous ancestor, Ingalls did in fact grow up in the Midwest, but his vocation eventually landed him in Houston.

“I was a dancer in my first career. I danced with several dance troupes in the Midwest, and was recruited by the Baton Rouge Ballet Theatre. I was their principal dancer for a few years. I then moved to Houston to dance with the Houston Ballet, but by then I was approaching 25 years old. Dance is a young man’s career, and I thought I needed to make a change.”

Ingalls then found work as a project manager and, like his parents, he also found his own love story. He met his partner, Brett Cullum, 15 years ago, and they have been married for six years. They now reside in the Montrose area.

Ingalls on the Prairie: The Gene and Fern Ingalls Story is available on Amazon on both Kindle and paperback.


This article appears in the November 2020 edition of OutSmart magazine.