Maria McKee was 18 when her cowpunk band, Lone Justice, was picked up and packaged by David Geffen. Dolly Parton hailed the diminutive kid with the powerhouse pipes as “the greatest girl singer any band could have,” and U2 handpicked them as the opening band on their Joshua Tree tour.

But despite all the praise, the band failed to meet sky-high expectations, prompting Geffen to make McKee a solo act. That’s why most people know her as the chick that sang that big-sky ballad from the Tom Cruise movie Show Me Heaven—just one of the highlights of her successful solo career.

Then, on her third solo record, McKee ditched the roots rock and the Americana that made her famous and released (or rather, unleashed) Life Is Sweet—a sucker punch of snarling guitars, primal screams, Broadway numbers, and songs that were just plain terrifying. The title track, however, is a gentle crooner ballad that flows into the majestic “Afterlife,” an almost wordless instrumental where guitars, drums, synthesizers, and orchestra seem to be building something and destroying it at the same time. Geffen hated the record, refused to promote it, and couldn’t kick McKee to the curb fast enough. 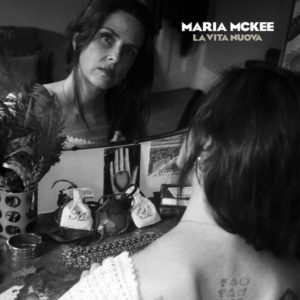 After marrying her bass player, Jim Akin, and moving to London, she left-hooked everybody in a 2018 Instagram post announcing that her “queer story is complicated and far-reaching” and describing herself as a “pansexual divorcée plunging headlong into the chapter marked ‘femme for femme.’”

At 56, McKee is now looking back on her old life and looking forward to a completely different one as she releases the aptly titled La Vita Nuova, her first record in 13 years. Vita is orchestral and aching, with songs that are expansive, evocative, and filled with longing. Eric Gorfain, who arranged the music for a 19-piece orchestra, had high praise for the project. “You could tell she was working on something that was . . .big.”

La Vita Nuova is being hailed as McKee’s best work since Life Is Sweet, an album now acknowledged as a musical masterpiece. And Geffen’s insistence on keeping it out of print is only adding to the record’s mystique.

OutSmart talked with McKee about the new album, spirituality, sex, and playing mother to the next generation of queer fans.

How old were you when you started your Lone Justice band?
I was 18 when we put the band together. The music business is harrowing. Picture a very, very young woman who has tremendous pressure placed upon her by a misogynist industry, coming from a home that was fraught with emotional and physical abuse, and having undiagnosed depression, anxiety, and post-traumatic stress.

What happened to you?
I became an alcoholic.

So many of your songs in those days had such an overt religious message. At the time you were very devout, but now do you look at that time very differently?
Well, I think it was my fundamentalist, evangelical, charismatic hippie cult upbringing, which was pretty oppressive. So much was projected upon me, like I was almost a prophet figure. I thought I was on a mission. I thought I had this responsibility. My Christianity was just sort of like, you know, a label for what I considered to be a kind of higher purpose.

Then you blew up your career with Life Is Sweet. Musically, was that just a divergence in style or was that the real you?
It was me, and I feel it’s still me. That was me going Okay, no expectations. I’m an erudite ex-punk rock, bitter, Broadway- and Scott Walker-obsessed artist. Kurt Cobain had just died, and I was like F–k you, I don’t care anymore, I’m gonna make the music I want. I’m smashing my brand and starting over. I feel like Vita Nuova is the first album I’ve been really, really spiritually, emotionally, and creatively invested in since Life Is Sweet.

What did your mother do when you were twelve and you told her you had feelings for another girl?
She took me in front of the church and had me exorcised. Oh yeah.

Was that a kind of catalyst that forced you into the closet for decades?
No. Because I was brought up as a Christian, I was terrified of any feelings I had for girls. I would have a panic attack when I saw a girl who was sexy. I never had a relationship with a woman, probably because of my internalized homophobia. I probably knew that if I did, then I would just become this big lesbian and my whole life would have to change. And you’re conditioned to believe that a woman needed a man to take care of her, financially and personally and socially and every other way. Yeah, I had a lot of Christian fans. They’re all probably gone now that I’ve come out as a gay witch.

Why do you say you feel so much shame?
Imposter syndrome. Identifying as queer, in a way, because my queerness is not for me—it’s not about who you sleep with. It just isn’t. Even though, romantically, I prefer women now, it’s so much more about advocacy and queer family and having a big support system. I’m in the demisexual spectrum. That is, I don’t really go into a relationship or sleep with somebody unless I have trust and friendship and they’re an important person to me. For me, it’s not about sex. It’s about community.

Maybe it’s a guy thing more than a gay thing, but it’s all about sex.
Yeah, I get that. It is with lesbians as well. I have unrequited feelings and tension and love letters. It’s more about that for me.

Was that the inspiration for the new album?
I created a muse inside of my head that I could hang the poetry on. That was a representation of youth and beauty and romance and desire that I felt I was basically eulogizing when I started writing the album. I had been denying my desire. So I was preparing myself, steeling myself for the second half of life. My marriage was a great partnership, but it was lacking things. I was remembering and wishing that
I could be this, and knowing that I couldn’t.

Do you look back on all those years and wonder . . .
I think about all the beautiful girls who could have broken my heart. And some of them actually did.

You hadn’t made a record in 13 years. Then you embrace your sexuality and these songs came pouring out of you.
They all sort of came at once. I must have written 40 songs for this record. That hasn’t happened to me since Life Is Sweet.

Is this in any way a sequel to Life Is Sweet?
I feel that they’re bookends. I do. Companion pieces, kind of like a sequel. Like a grown-up version, in a way. When I was making the album, I went into a very dark place. Very dark, because I knew that it was a map to something that was going to be very, very hard to navigate. And it was. It was the reinvention of my marriage and my life, and it was one of the darkest places I’ve ever been in.

Where does faith fit into your life now?
I’m an eclectic. Sort of a solitary practitioner of esotericism and Western mysticism.

It’s like you embrace these strictures of the faith. Then you mature in your walk, and you find they don’t necessarily fit. You get to a point where you just kinda get with God and say, “Let’s just figure this out on our own, together.”
I’m spoiled, because my intuitive practice [of my faith] comes to me quite easily. But Jesus Christ is still a very potent thought form for me, and I use Jesus Christ in my practice still. I don’t tell many of my occult friends that. Or my queer friends. But I was raised [to understand Jesus] as a very protective, loving thought form. I still feel that way.

A 20-ish lesbian friend of mine listened to your album, and she went right to “Courage.” She said, “That is so lesbian.” Those lyrics: “If she were to somehow know/And to find my affection for her ridiculous/Oh but that would kill me/But I will never find the courage to tell her/And she walks by/And I must love suffering.” That is so gay. Straights get their hearts broken, too, but unrequited gay love is not the same. It’s more. More awful. More painful. More everything.
I fall in love with straight girls, but I also know that they have the potential to be queer because they’ve admitted such. It’s complicated.

Is there a girlfriend in your future?
I don’t really know that I want to be in a relationship. I love falling in love.

You’re such a romantic.
I fall in love a lot. And I will a million more times. I live a very polyamorous lifestyle,
even though it’s not.

You have such an affinity for these young, young kids. Especially trans people.
I’m a mother to a lot of young queers. Like, they call me Mom. Most of them are gender-nonconforming trans.

Tell us about your charity.
It initially started out as a funding platform for trans women and transfeminine people that are self-funding their feminization procedures like facial-construction surgery and laser hair removal. But after COVID happened, it’s become an emergency relief fund for everyone in the trans community and the gender-nonconforming community. I’m helping people with trying to get the rent paid and food on the table, and stuff like that right now.

You get pretty pissed off on Twitter. I mean, can you believe people still question trans acceptance? You’re merciless in calling the queers on the carpet.
It’s like, this is your community, people! I’m not gonna lie, I know this from my friends. There’s a lot of transphobia in the queer community. But we’re all in this together! [Sighs] Okay, now I’ll get off my soapbox.