A split-second decision to dive unknowingly into shallow water at a UT college party in Austin left Wes Holloway with a spinal-cord injury that changed his life’s trajectory forever. The path he is forging as an artist and activist has allowed him to celebrate the communities he is a part of, as well as advocate for accessibility improvements in the future. As a proud gay man with a physical challenge, Holloway uses his art to express Pride, and his voice to rally for change.

After his 2003 accident, Holloway began using 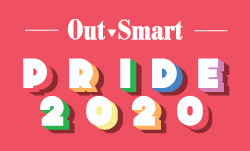 a wheelchair to get around. Having taken some time off, he returned to the University of Texas at Austin to pursue his true passion—art. The charismatic creative recalls some initial struggles to find his niche. “I was in the fine-arts school and was studying art education to get my teacher certification. During my second semester of student teaching, I realized I couldn’t do it. It was wearing on my body, and I knew I’d be burned out within three years. My professors encouraged me to stick with studio practice.”

The advice paid off. Holloway has found success by focusing on what brings him joy. He touts painting as his true love, while drawing and collage offer instant gratification. “My inspiration and subject matter always tend to go back to the body—how we interact with our bodies, and society’s preconceived notions about what our bodies should look like and be,” he explains. “I’m not trying to push an agenda, but I’m trying to find out what these ‘ideals of masculinity and beauty’ are for myself.”

His focus on physical traits and ideals has inspired some revealing intersectional conversations. “I’ve come to find that people without disabilities can relate to my art. I get people of all backgrounds telling me they struggle with similar issues concerning the body and society’s ideals, and what is expected of us in gay culture. It’s reinforced [my belief] that I do have a voice.” Holloway is using that voice and his undeniable talent to establish himself as a stand-out in Houston’s art scene. In addition to volunteering as an art instructor at Texas Children’s Hospital, he works with the United Spinal Association of Houston and Art Reach, two local nonprofits that give back to underserved communities.

Entering Pride Month, Holloway reflects on what Pride symbolizes to him. “I think I’m innately proud that I’ve made it through something—a trauma, or change,” he says, referring to his C5-C6 vertebrae injury. “I’m proud of myself for doing that. But then you think of the LGBT community and what we’ve gone through, collectively or individually. If you’ve been bullied in school or didn’t have a supportive family, that’s something to be proud of—just making it through.”

Despite being a proud member of the LGBTQ community, Holloway sees a need for change if the community wants to be fully inclusive. Speaking about the challenges of differently-abled folks, he laments that Houston’s Pride parade is now a nighttime event. “Many people in the disability community can’t get out at night, because of transportation. A lot of the Pride celebration events are either at night or in bars. We’d like to get involved too, but we can’t get out there.”

The artist counts himself as one of the lucky ones. “I can drive, and I’m not super-reliant, but I’ve realized, being around others, that the timing of Pride Houston is itself a barrier. And a lot of other gay events are done at bars or venues that aren’t accessible.”

So how do we start to work for change? “Ask questions. Seek people out,” the striking artist says, simply. “I’m just one example of that. Blind, deaf, other impairments—that’s a whole different ball game. Get to know people that are different than you, but are still part of your community.” Holloway emphasizes that the conversation should be a two-way street. “For the most part, if someone with different abilities is asking for something, they are trying to be included.”

With his art and his identity as a proud gay man with a different ability, Holloway reaffirms that he does have a community to be proud of. “I have found a culture that I didn’t have. The disability community has its own culture, and the queer community has its own. As a cisgender white male, I don’t have a lot of that. So I’m proud to see that my identity is ingrained in others. I can be unique, but that uniqueness is common with a group. I just think that’s kinda cool.”