Bearded ladies are no longer just the stuff of circus shows. They’re thriving in Houston’s drag scene, where they are pushing the boundaries of gender and beauty stereotypes. One of those drag queens celebrating the counterculture of drag is Barbara Coa—aka Frank Hernandez, who runs a series of shows in Houston bars while also running his own media business.

Barbara Coa’s va-va-voom proportioned padding, body hair, and stunning mug make her stand out from the crowd, but she says it’s all in the name of art and performance.

“Barbara Coa started out as a favor to a friend doing a twin challenge for one of the local drag competitions. That was the first time I performed on stage. After feeling that energy and rush you get from being in front of people, I wanted that high to keep going and explored the idea of putting myself in drag,” Hernandez explains.

One of the places to catch Barbara Coa performing is at Smoke Break, which will hopefully resume at Guava Lamp on Waugh Drive the first and third Thursdays of each month.

“Smoke Break is a group of creative people. It’s the ‘alternative’ queers who perform in drag. We’re just innovative drag queens who perform things you would hear on the radio, but with a twist.”

Guava Lamp also featured Barbara Coa in a disco-themed party that organically develops into a performance spot. While drag isn’t necessarily a requirement, she says she found a way to sneak it into it each gathering.

“There aren’t really places to dance in Montrose, so I want to cultivate a space for that. Music is playing throughout the night, and then when 11:00 hit, the light went on, and bam!” she says. “I always think of it like Studio 54—something erupts and we just dance into the crowd. We don’t have that line of performance space versus the audience. We’re just in there with everyone.”

She also had a Kinky Queens show at Ripcord on Fairview, where the show themes lean toward more provocative subjects.

“Ripcord is known for leather and kinks, and we have fun interpreting that. We do things like pup play and water sports. Anything goes,” she says. “I incorporated the idea of water sports into a music mix by Rihanna. It went along with songs about getting wet. You get creative with the subject.”

Barbara Coa tries to work in teachable moments during Kinky Queens to address safety, stigma, or ways to find more information for each theme.

When he’s out of drag, Hernandez works with Ripcord for a separate series called D-RAW, where drawing models a would arrive and guests are provided with supplies to create their own works of art.

“I’ve always wanted to do something with drinking and drawing. It’s just an idea I had, and me being a regular at Ripcord, they were comfortable giving me the space to execute that. They’ve been really great about that, as well as creating a safe space for other queer people,” he notes.

Ever the busy worker, Hernandez also belongs to a queer artists’ group dubbed Qollective. Their diverse skill sets allow them to create meaningful dialogue around contemporary social and political issues through various media. Depending on what he’s feeling at the moment, Hernandez will appear as Barbara Coa or sculpt art at Qollective’s many exhibitions and shows throughout the year.

Hernandez and his partner of eight years, Jay Clark, run a video production company named Your Videographer. Hernandez directs and shoots film, and Clark serves as the digital editor to bring their masterpieces to completion.

“We shoot wedding videos on the weekend. We’ve been doing that for the last four years professionally. They’re usually on [Saturday afternoons], so it doesn’t interrupt my drag.”

The video business started as a passion that both of them had, and it blossomed when the side hobby became a profitable venture.

“I started off as a photographer, and I’ve always been into fashion and fashion photography. When I met Jay, he was studying to go into finance, but he always carried a video camera with him. He would always film,” Hernandez says. “We mixed what I was doing with videography, and after he took some production classes at Houston Community College, it blew up from there.”

They filmed 55 weddings in their first year, and they haven’t stopped since. They have also added social-media production capabilities—something that can be seen on Barbara Coa’s social-media posts. Ultimately, their goal is to film a same-sex wedding.

Running so many shows each month while also maintaining a small business is a daunting task, but  Hernandez was keeping up the pace. Eventually, though, he would like to transition his talents. 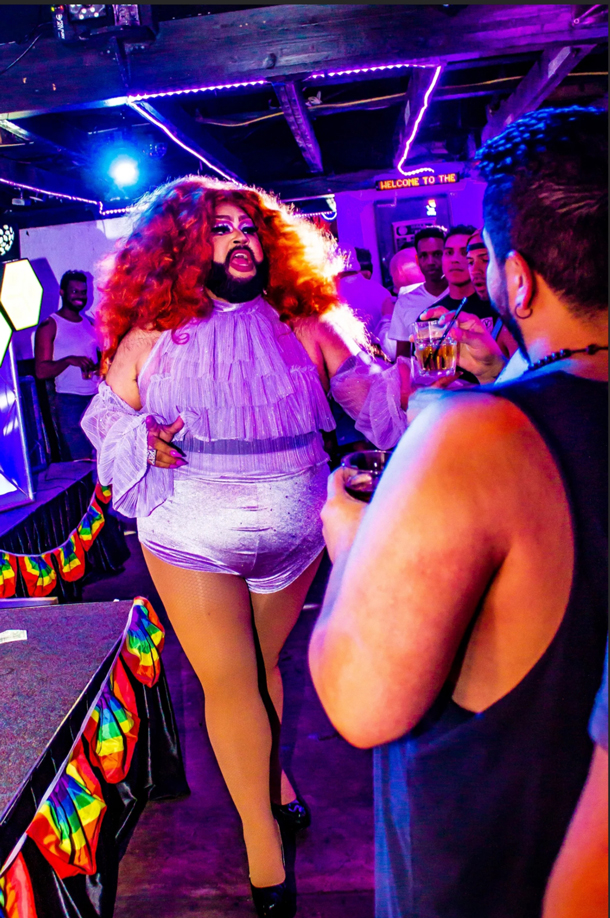 “I want to be a creative director who produces cool, great shows. I want Smoke Break to get bookings at other places. It’s my baby, and I want to show it to the world. All the people in our group are such creative individuals,” he says.

“I don’t want drag to consume me. That persona will eventually die out, but I want to be involved in producing shows and be behind the scenes. My goal is to support someone and get them onto RuPaul’s Drag Race. Or maybe create a show here in Houston. We’ve got great drag queens here, but we haven’t seen anything on television yet,” he notes.

This article appears in an upcoming issue of OutSmart magazine.