The reigning Mother of Montrose was conceived on Halloween in 1993, when Benn Parnell required a costume at the last minute.

“I had some trash bags, so, voilà! I had an outfit and a name: Viola DeGradable,” he explains.

However, far from decomposing like biodegradable material, Parnell’s drag persona keeps on kicking, even after his left leg was amputated last year.

“I have a vascular degenerative disorder that is hereditary,” he explains. “My mom, in her seventies, had her right leg amputated. We wear the same size shoe, so when I buy a pair, I keep one and she gets the other.”

He means tennis shoes, not pumps. “I haven’t had a pair of heels on in over a year. I’m pretty handy with crutches, but onstage I just perch.”

Viola’s act was “a little more energetic” before the amputation.

“I was one of the first entertainers in Texas to hoverboard,” he says, including a performance of “Xanadu” by Olivia Newton-John during the 2017 Austin International Drag Festival. (Search “Xanadu @ Austin Drag Fest” on YouTube)

Viola has also danced in hooker heels, and worn a toilet-paper-roll ’do that made fans snatch their wigs.

To Hollywood and Back

Parnell grew up in Channelview, “just a hop, skip, and a jump into Houston for ‘all-you-can-drink Wednesdays’ at The Copa.” At that former hotspot on Richmond Avenue (known to the jaded as The Coma), Parnell was especially enthralled with drag star Tiffany Jones, who was known as the Texas Tornado and, offstage, as a handsome man in cowboy drag.

Parnell began performing “on and off” in an act called Bennie and the Jets, which included two female backup dancers and current Daddy of Montrose David James Barron as one of two male backup dancers. “I was the center of attention,” says Parnell. “Back then, everybody was having fun.”

In 1981 and ’82, Parnell portrayed Marvel McFey (hmmm), the mascot at AstroWorld, followed by a stint as “the oldest lifeguard” at the adjacent WaterWorld park. 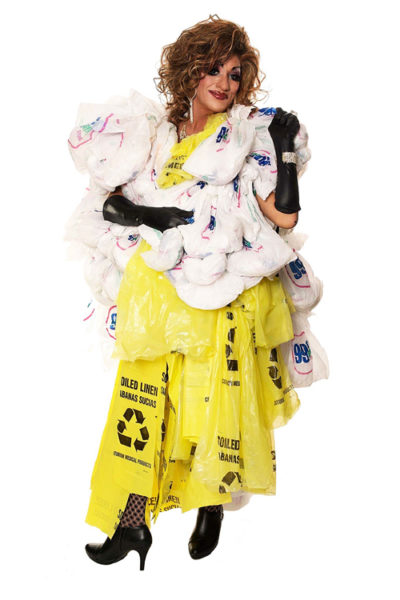 Next, Parnell moved to Hollywood and enrolled in the Academy of Dramatic Arts, a private performing-arts conservatory in the heart of Tinseltown. “They ate me alive,” he says. “I was this little tiny goldfish in this huge pond. They didn’t like me. They didn’t like people from Texas, first of all, and my drawl made it worse.”

After two semesters, and unable to afford another one, Parnell returned to Texas and retired in Channelview, “which was plenty for me,” he says. “I came home to a different world than I left,” as the AIDS epidemic struck Houston without mercy.

“I got out of drag and I got away from the gay community,” says Parnell. “I spent a lot of time in Channelview.”

In 1988, Parnell was diagnosed with HIV, and he entrusted his care to Dr. Gordon Crofoot, who remains his primary physician to this day.

In 2001, Parnell quit his job as a waiter and went on disability, as Crofoot deemed Parnell’s employment to be “too stressful” for his overall health.

Later, when Parnell’s partner of 12 years died of a brain aneurysm, he says, “I was already in my 40s, which is over the hill as far as the gay world is concerned. My little brother put me on a dating website, and that is how I met my partner of 10 years.”

“He’s Mr. Viola,” says Parnell. “He is everything, as far as getting me dressed and to and from the venues.”

Viola performed “Try” by P!nk to win the 2019 Mother of Montrose title, and will crown her successor in a pageant on Mother’s Day at Michael’s Outpost. In addition, Viola is hosting a benefit at 6 p.m. on Sunday, March 15 at Tony’s Corner Pocket for Destiny Bass, an LGBTQ ally who served as Girl of Montrose 2015. Bass is fighting cancer.

But first, Viola will headline a “Thank You Show,” benefiting Holiday Charities, at 6 p.m. on Saturday, April 25 at Tony’s Corner Pocket.

Keep up with Viola DeGradable on Facebook at facebook.com/viola.degradabledebris.