New York City stand-up Zach Zimmerman performs in Houston on March 12 as part of his Gay, But Not Too Fabulous tour. Before Zimmerman introduces Houston to his signature style of darkly sweet storytelling, he spoke with OutSmart about opening for Alyssa Edwards, touring the country, and his plans for attending the Houston Rodeo.

David Goldberg: You started in Chicago, and now you perform in New York. What’s the difference between those audiences?
Zach Zimmerman: In New York, more of the audience is wearing black. Black turtlenecks fill the room, and everyone dresses the exact same way. But both cities have been spoiled by a rich tradition of live performance. And they both struggle with competition, actually. But I love the crowds in both. I think the humor that people react to is the same. I [can’t really compare the two] because I did improv in Chicago (where you listen to the audience and let them guide you) and I do stand-up in New York (which is honed over time and pre-written).

What’s it been like for you to take your comedy around the world?
I love performing in the U.K. I’ve learned that U.K. crowds love a proper joke, Chicago crowds love polish, and New York crowds like a peek behind the curtain. But every audience is different, no matter which city you’re in. Everybody likes to have a couple of drinks and go on the mini-vacation that is the joke of someone sharing themselves onstage. It’s this one-of-a-kind combination of people in a specific place, at a specific time, after specific news has happened. 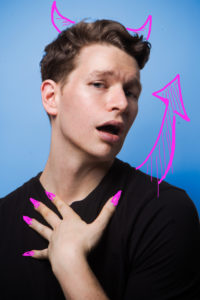 You’ve performed for gay crowds, straight crowds, and everything in between. What have you learned along the way?
Gay crowds can be judgy. Straight crowds like being reprimanded for being straight. And your ideal situation is [having a diverse] crowd across all identity markers. You want people from different experiences in terms of gender, sexuality, and race, so that everyone’s coming together and you’re uniting them as a performer in a way that they haven’t been before. The shared experience is you onstage. I focus a lot on autobiographical stuff, and then it becomes more universally relatable. I talk about being out to my parents. I think anyone with a parent kind of grapples with what their identity is like, and how, as they grow and morph and change, to send love home to their parents. And anyone who has ever dated, the woes of that feel universal. Even if I’m talking about the hyper-specific experience of a Grindr DM, a straight person can still connect on the higher-order level of just wanting some human connection. I like straight crowds, I like gay crowds, I like crowds of all kinds.

You took your Clean Comedy show and album to the Edinburgh Festival Fringe last year. What’s the plan for this new tour you’re embarking on?
It is about sharing that final product with parts of the U.S. that I don’t frequent as often. If you live in New York, you can catch me any week, but for some people who don’t live in New York but have heard the album or follow me on Twitter, hopefully it’s a treat for them to get to see the live show. I love performing live and going to towns I’ve never been to. Houston came about, interestingly, because a good friend from Chicago moved to Houston two years ago. I visited him once, and he has been begging me to come to the rodeo, which he describes as the most exciting thing in the world. So we got tickets to see Lizzo at the rodeo, and I figure that while I’m in town, I might as well put up a damn show.

Do you know what the Houston Livestock Show and Rodeo is?
I’ve been told it’s like a state-fair sheep-riding and bull-wrangling event that quickly turns into a concert.

Very good!
I want funnel cake, I want to feel uncomfortable for the animals, and then I want to see Lizzo throw down.

What have been some of your most gratifying and most mortifying encounters with fans?
It’s always gratifying when someone shares my experience and feels seen by the shows. If they grew up with evangelical parents, or are from the South, those always mean more. Mortifying is being hit on by someone I’m not interested in. There’s always the bait-and-switch in the DMs, where they say “Great show!” and I say “Thank you!” and then they’re like, “Let’s . . . ” And it’s like, Oh, that’s what this is about.

Have you ever had the opposite happen, in which you’ve crushed after an audience member?
I usually address it onstage, if that’s happening. At Edinburgh two years ago, I did two bits: I’d flirt with a random audience member, then I’d ask the audience which one of us they thought had had the most recent sex. There was a nice instance where a guy came to two shows; he was the object of my flirting the first night, and then on the second night he was the person who had most recently had sex, and it was with me—and I got to interview him about it!

How did the interview go?
It was good. He was open to it, and enjoyed the little moment in the spotlight. He didn’t have any notes for me, which is always my goal.

Last year, you opened for Alyssa Edwards. What was that like?
It was fabulous. I got the email on Wednesday, and I had my first show on Thursday. I don’t watch RuPaul’s Drag Race, so I didn’t know who she was—which I know is gay blasphemy. So I honestly asked you who Alyssa Edwards is, and you gave me the lowdown on one of the most famous drag queens in the world. The experience was fun. The title of my tour comes from that experience, because when I asked the booker why they picked me, she said Alyssa wanted someone “gay, but not too fabulous.” That has become my brand. I kiss boys, but wear T-shirts and blue jeans I haven’t washed in a year, which my mom reprimanded me for. She was like, “You have to wash your jeans every time you wear them!”

What should your Houston audience expect from your show?
They’re in for a fun, festive, gay night of Southern storytelling, and hearing my origin myth of how I went from a Southern Baptist evangelical conservative to a gay atheist. There’s sad stuff, so it’s not just one-liners. Be prepared for the full range of human emotions. You’ll laugh, but you might cry.

What: Zach Zimmerman’s comedy tour Gay, But Not Too Fabulous
When: March 12 at 8:00 p.m.
Where: The Secret Group, 2101 Polk St.
Info:  tinyurl.com/ZachZimmerman