Three years ago, Houston native Lauren Chapman was working as a metal fabricator’s shop assistant on the outskirts of downtown Houston. Today, she holds the keys to that same building as the owner of Chapman Fabrication. In the simple metal warehouse on Hardy Street, she and her small but dedicated team design and create one-of-a-kind pieces of art.

“Everything is so custom that there aren’t a lot of repeats. If you have an idea of what you want to do, we can figure out how to make it.”

The laid-back designer with short brunette hair and a megawatt smile considers herself a designer, first and foremost. “I always did art-related things and was into sculpting when I was growing up,” Chapman reflects. “It wasn’t until my junior year of undergrad at Baylor University when I was like, ‘Oh, this is a good fit. I’ll do this [for a living].’” She got her start running wood shops and metal shops in college, getting her feet wet in multiple design outlets. “I tried to figure out how to use what I’d learned, to make a career out of it.”

After a brief stint working for a landscape-architecture company, Chapman, who identifies as a lesbian, quickly realized that additional schooling was necessary to get to the position she envisioned herself in. “I decided to go back to grad school at Houston Baptist University, and began to make art connections in Houston. I did that while I was also working at a gallery,” the artist remembers.

A search on Glasstire.com led Chapman to her job as a shop assistant. Little did she know, after six short months the shop would be hers and Chapman Fabrication would be born. “I worked for the guy for six months, and he decided he didn’t want to do it anymore,” the charismatic designer laughs. “I bought all the tools from him and rented the space. He forwarded me his clients, and I grew my contacts through that. It’s all been word-of-mouth since then.” 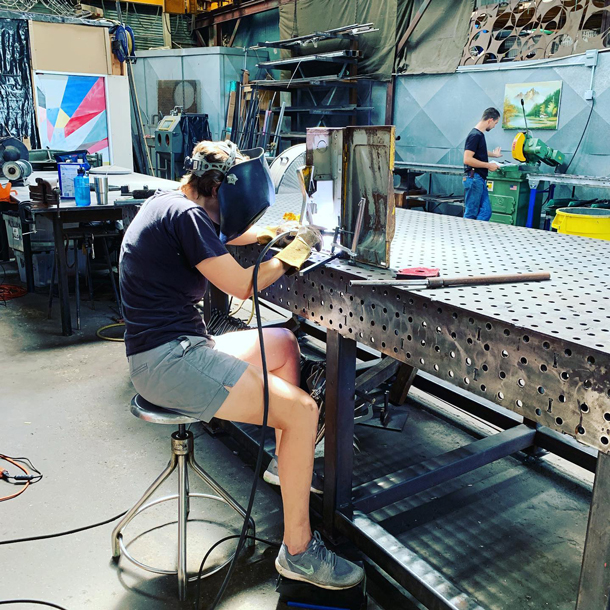 The creative force explains her team’s diverse skill set when listing the materials they regularly work with. “We have the capabilities to do all different kinds of sculpture—steel, brass, and more. We work with different components for tables—glass, wood, and all kinds of materials.”

Now in her third year of owning her own business, Chapman leans heavily on her background as a designer while also juggling the business side of Chapman Fabrication. “The biggest thing for me is that I don’t see myself as a business person,” Chapman explains. The artist finds motivation in knowing she is at the helm of the ship, keeping the business afloat. “It’s a lot of pressure. That’s the part that’s exciting and terrifying at the same time,” she laughs. “I can go out and get as much work as I want, or I could crash and burn. It’s up to me to figure it all out.”

Chapman lights up when she talks about past and future projects. “Everything is so custom that there aren’t a lot of repeats,” she emphasizes. “If you have an idea of what you want to do, we can figure out how to make it.” That confidence has led to some big clients for Chapman and Dan Corgey, her head fabricator.

“We did some tables and a wall piece for Local Foods in the Heights,” Chapman recalls. “We also did the Houston Pride booth for Lyft in 2019.” The colorful structure traveled to 8th Wonder and Karbach breweries, as well as downtown during the Pride parade. The team also collaborated with Lyft for a booth during the Houston Livestock Show and Rodeo. Looking ahead, Chapman is particularly excited about an upcoming opportunity. “I’m getting to sponsor and make a few pieces for the Milieu 2020 Designer Showhouse in Houston next month. I’m also doing a sign for 1836, a new bar that just opened. We’re going to have a sign-reveal party when it’s complete. Lots going on!” 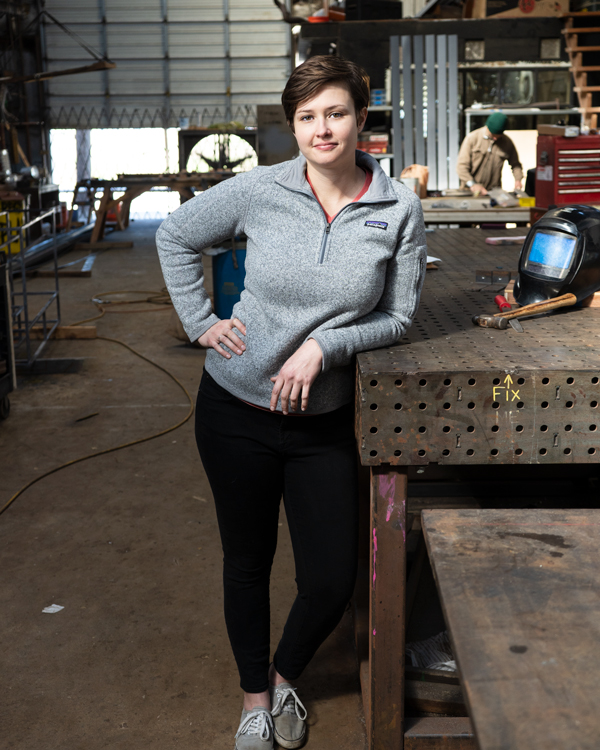 Learning life’s lessons, getting a good education, and camaraderie with other artists are the major keys to Chapman’s success. She encourages the next generation of designers and creators to get up from behind their desks and start getting their hands dirty. “Go actually do—don’t just study art. Don’t just draw if you want to do sculpture. Learn how to use the tools, how different materials react. Experimenting is key,” she says matter-of-factly. “Burn things! I made a lot of mistakes through experimenting—there were accidents, but they helped me get what I ultimately wanted.”