Writer Jenny Block boasts a list of published materials that would make any author proud—or at least make them grin devilishly. She is often called on as an expert on sex and women’s sexuality for several high-profile media outlets ranging from the Huffington Post website to Playboy magazine, and she writes often for local LGBTQ publications such as OutSmart magazine and the Dallas Voice.

“If you can be anything, be a unicorn. Be a badass unicorn. It’s sort of a cute character, but she has a horn and she’s willing to use it if she has to. She’s brave and bold, and will take you on, but she likes to prance around, too.”

Her most recent book, Be That Unicorn: Find Your Magic. Live Your Truth. Share Your Shine takes a detour from the world of carnal awareness by diving into daily tips for navigating life’s daily occurrences. Yet, like her previous writing, the advice is steeped in honesty and authenticity (with a dash of audacity) regarding the best way to live one’s best life—unicorn style.

“In a way, it’s the culmination of me as a human and as a writer. I write in many universes. I write about food, travel, art, theater, and music, and I found myself writing about female sexuality, which led to a fun, interesting segment in my life,” Block says.

As a result of her previous works, Block was invited to speak at several engagements where she noticed a similar thread running through other women’s questions.

“What was most fascinating to me is that there are all these setups for these intimate questions, and in the end, all of the questions were really asking if they were okay,” she says. “They would ask, ‘Is it okay that I want this? Is it strange that I enjoy this?’ In the end, it was all about just supporting people. They were looking to be heard—and to be part of the herd. They wanted to know they fit somewhere.”

The book lays out helpful hints for readers who want to find their own groove, and a wealth of that knowledge comes from Block’s own experiences.

“There was a time when I wasn’t good at taking on adventure. I was too scared of what would happen. For example, I hadn’t been on a roller coaster until I was 40. I was standing in line at Splash Mountain, and there’s a place in the line called the Point of No Return, where you can leave the line instead of getting on the roller coaster,” she remembers. “I looked to my right, and there was this bench with all these women sitting on it who looked so tired. They were holding all of their children’s gear while waiting for them to get off the ride. And then there was this line of people who were so excited to go on Splash Mountain.”

That experience at Splash Mountain was a metaphor for how Block wants to live her life. “I didn’t want to be on that bench, so I started what I call ‘The Year of Yes.’ I said yes to life’s experiences, as long as I didn’t die or end up in jail. I rode in all-terrain vehicles, ate whatever crazy dish was in front of me, scaled buildings, went on dates, and embraced wanting to have a kid,” she elaborated.

‘The Year of Yes’ became ‘The Life of Yes,’ and it has given Block the wisdom she wants to pass on to others in Be That Unicorn, a title originating from her ‘spirit animal.’

“If you can be anything, be a unicorn. Be a badass unicorn. The unicorn is just something I started to feel very in tune with,” Block observes. “It’s sort of a cute character, but she has a horn and she’s willing to use it if she has to. She’s brave and bold, and will take you on, but she likes to prance around, too. That felt like it fit me,” Block says.

The book serves as a clarion call for people to speak and live their truth—especially for women. “Equality for everyone is the point. Not more or less, or better or worse—just equal footing. [In former times,] men were bigger and stronger. And now, that’s suddenly not the case anymore. This is a shift for all of us,” she notes. “It’s going to happen. It’s just going to be a matter of how hard it’s going to be when we do it. And we all must be nicer.” 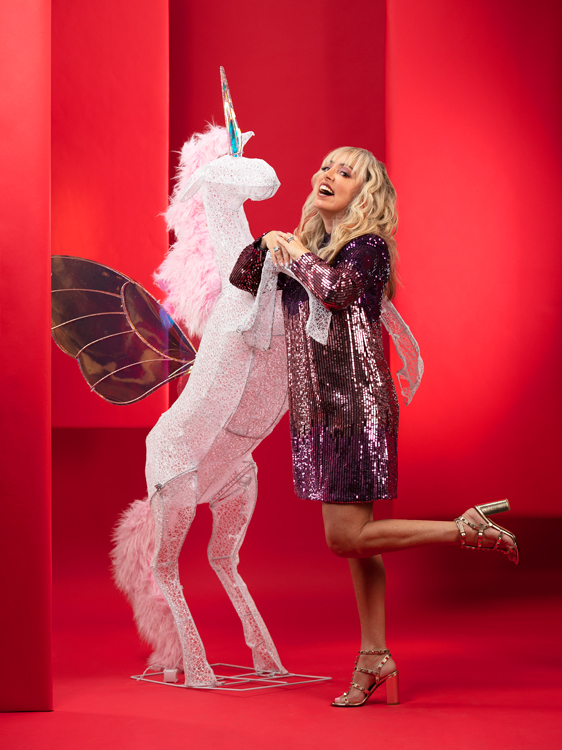 Be That Unicorn is also a battle cry to embrace the shortcomings in life and do the best with whatever is provided. Block says even she has moments when she’s not at her best, and she hopes the book will help provide others with the inspiration she has found through her own trials in life. Perhaps it will even provide a way for others to learn how to communicate with each other in uplifting ways.

“I have these dreams of people saying, ‘You’re not being that unicorn today,’ and I think maybe that’s what we need. We need a language for something that’s about changing the way we walk around in the world, and I want to walk with kindness first,” she adds. “I’m not always good at it. Sometimes I’m grumpy, but I regret it when I’m not nice. We’re all just doing our best, and ‘doing our best’ is going to look different for every person, every day.”

For more information on Jenny Block and ‘Be That Unicorn,’ visit thejennyblock.com.