From caramel-apple buñuelos to Hennessy-infused butter pecan cupcakes, the sweet possibilities are endless at The Dreaming Oven bakery.

“I can make anything,” says the shop’s owner, Angelina Marie. “My skills are not limited—but I really love creating cakes for special occasions.”

An edible turntable featuring working neon lights for a local DJ’s birthday party is just one of the unique cake creations Marie has constructed since launching her Houston business in July. She opened her store just months after graduating from Houston’s Culinary Institute Lenotre, the top French baking program in the United States.

“I can make anything. My skills are not limited—but I really love creating cakes for special occasions.”

Though she’s always had a gift for pastry-making, Marie’s journey to becoming a professional confectioner has had many layers, she admits. After coming out as transgender, she was forced to engage in survival sex work.

“I honestly didn’t see a way out of that,” Marie recalls. “I started my transition in a different time, when the opportunities were very limited. Not having your name changed made everything even harder.”

After the late pioneering trans activist Nikki Araguz Loyd helped Marie legally change her name four years ago, “I promised I would do something good with it, because I had an opportunity to start over,” Marie says. “I wanted something different for myself.”

One year later, Marie was accepted into the Lenotre program, where she was embraced by all of her professors and classmates. Shortly after starting there, she was hired as the institute’s librarian and continued in that position until graduation.

Now a licensed pastry chef and in-home business owner, Marie sells her treats at special pop-up events and local markets across Houston, in addition to baking custom orders in her own kitchen.

Within 24 hours, Marie can turn around a specialty cake order effortlessly. The process begins when a customer contacts Marie, who asks questions about the cake’s flavor, shape, and design. After understanding what the customer wants, Marie begins to bring that vision to life.

“That’s where your creativity comes in as a pastry chef,” Marie says. “You take people’s ideas and create exactly what they want.”

One of the most heartfelt cake creations Marie says she’s worked on was for a Transgender Day of Remembrance event organized by trans activist DeeDee Watters in November. The cake was pink, white, and blue (the colors of the Trans Pride flag), and featured the names of the 22 individuals who were murdered due to anti-trans violence in 2019.

“That was a really emotional project,” Marie recalls. “Although I didn’t personally know any of the people who were murdered, [it hit very close to home].”

In December, Marie gave back to her community again when she partnered with trans activist Mia Ryan for a holiday charity event. During one of Ryan’s weekly Sister to Sister trans support-group meetings at the Montrose Center, Marie demonstrated how to make and pipe her buttercream frosting for cupcakes. The event was free with the donation of a new toy, and all of the toys went to the trans children who attend the Montrose Center’s Hatch Youth program.

“I wish I had something like Hatch while growing up,” Marie says. “The [kids who participate in the program] are just kids. They’re innocent and need support from our community. I plan on continuing to advocate for them through my projects.” 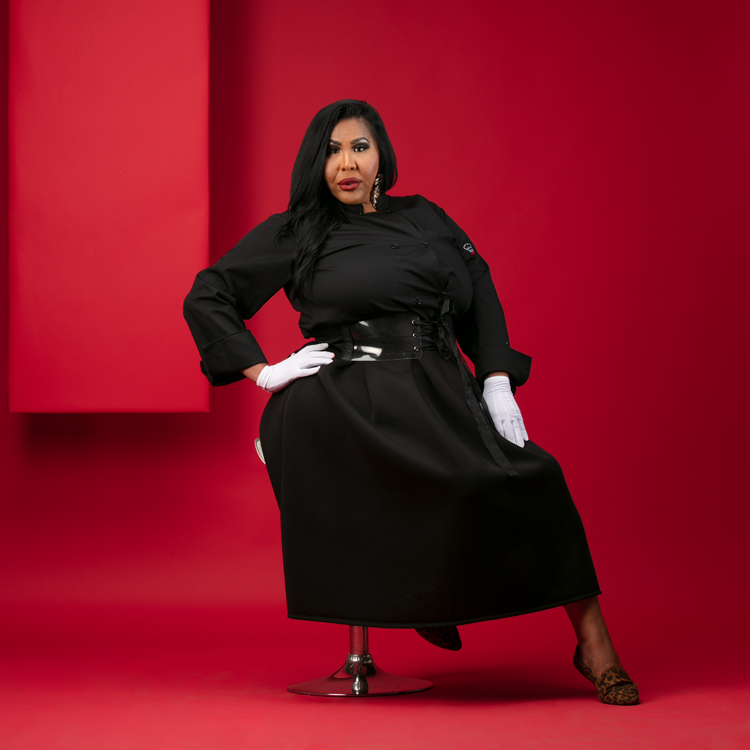 Marie grew up in a Mexican household in Space City with her mother, who is one of her biggest supporters. “After I started my transition, I traveled a lot to find myself,” Marie says. “I did a lot of exploring, and even made it as far as New York. But I always came back to Houston. A lot of that had to do with my mother—I didn’t want to be far from her.”

Marie now lives with her partner of five years and their dogs. Her business is booming, thanks to the connections she’s made within Houston’s LGBTQ community, and she sees herself outgrowing her in-home bakery in the near future.

While Marie took a break from social media for a few years to focus on herself during culinary school, she’s now back on Facebook, where she showcases her dazzling desserts.

“Now that I’m back online, I sometimes run into people in the trans community who haven’t seen me in a while,” Marie says. “They [congratulate] me for going to school and starting a business. My success story is an inspiration for a lot of people, both younger and older than me. Now that I have a bigger platform, I want to uplift them.”

For more information on The Dreaming Oven, visit facebook.com/thedreamingoven, or email [email protected].