“Hey good looking, what you got cooking?” Ask that question in Michael Dorsey and Chih Lin’s kitchen, and the answer will most likely be dumplings. The married duo, also known by their business moniker Dumpling Dudez, recently created a business venture to teach the techniques behind the eloquently wrapped, Eastern-inspired delights.

It’s generated quite the excitement in Houston’s foodie scene. The couple’s burgeoning enterprise is quite tasty and complex, but its origins were sparked by something simpler—their budding romance.

“We actually met online,” Dorsey explains. “A friend of his saw my online profile and told him he needed to message me. I lived in Austin, and he lived in College Station at the time. We talked online and messaged each other for a good four to six months. This is before social media, just to put it in context. It was a leap of faith. He came into town and we grabbed coffee.”

The rest took off from there. The relationship grew, and eventually the time came to start taking more serious steps toward creating a stronger bond, including getting to know each other’s friends.

“When we first met, we didn’t know if our friends would like each other, so we threw a dumpling event to get everyone together, and people loved it. Now we do it once or twice a year,” Lin says. “We both are foodies, and we both wanted something creative. We tried to figure out what life experience we liked in the past, and we decided it was dumplings. We wanted to make it an experience for other people.”

At the time, both enjoyed careers in engineering, but they felt compelled to depart from their original career paths to take on something more meaningful that they could call their own.

“I worked in oil and gas for 15 years, and Mike worked in that for five years. We loved what we did, but at the end of the day we realized we were building a dream for someone else. We felt like something was missing, and wanted to do something more fulfilling. It was scary, but eventually we dove in,” Lin says.

Dorsey had previous experience as a construction contractor and subcontractor, so he was more at ease with the idea of going rogue. Lin eventually got on board with the idea of leaving his job, and finally informed his boss on April 1, of all dates. And voilà, Dumpling Dudez was born.

The name was something that seemed natural to the pair. Doresey says, “It was just something funny we were joking about. People already knew us as foodies and from cooking dumplings at the parties we’ve thrown. People nicknamed us ‘Dumpling Guys,’ and we turned it into ‘Dumpling Dudez.’”

The idea behind the business is no April Fool’s joke, though. It offers a beginner’s level how-to lesson on creating the dough, building a dumpling, and getting creative with the various folds and designs for these tasty morsels.

Classes cost $69.99 per person, which includes an introductory glass of bubbles, an appetizer to kick off the night, and all of the required ingredients and tools. Plus, participants get to cook all the dumplings and eat them at the end of the class. Perks of the night include a BYOB format, as well as a chance to take in the stars and Houston’s skyline after the class is over, weather permitting. The class is offered on Fridays and Saturdays for three weekends out of the month, and each class can accommodate up to 12 guests.

Dorsey and Lin offer a selection of meats and fillings—including vegetarian options—for people to choose from during the class, and they follow up with sample recipes for participants to try at their leisure.

Roses, college mascots, cartoon characters, Yoshi eggs, Baby Yoda—you name it, and the Dumpling Dudez can find a way to shape it out of a dumpling. Although they teach the traditional dumpling folds, they usually pay attention to current events (whether it be pop culture or an upcoming holiday) to find something timely and memorable to create in their classes. 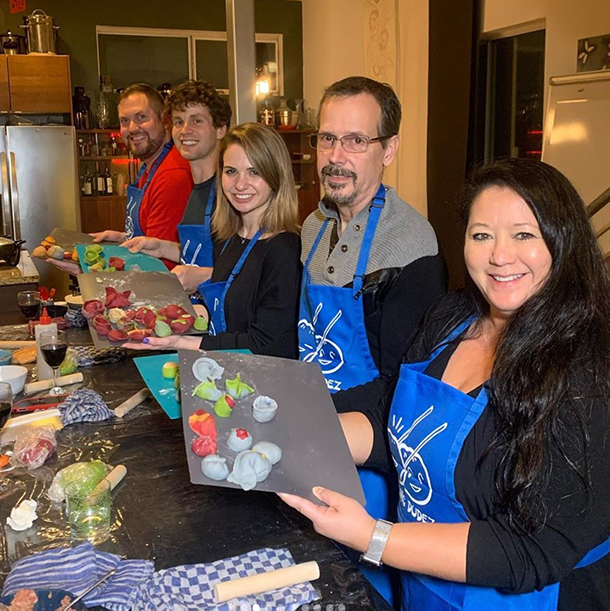 The Dudez are social-media savvy, too. They supply selfie sticks, a tripod for time-lapse videos, and lights for images and videos on Instagram, YouTube, and Facebook. They also give alerts throughout the class for the perfect Boomerang moments.

In fact, social media is one of the best ways they market their classes. Lin’s background in marketing for the energy industry serves Dumpling Dudez quite well. In the first few months, he grew the business’s Instagram account from 200 followers to more than 2,500 and counting, while posting everything from tried-and-failed experiments with dough colors to discovering new shapes and folds for the dumplings.

Dorsey says Dumpling Dudez can also take their kitchen-class experience on the road, if requested. Businesses sometimes hire them for team-building events, or as a fun way to decompress from the daily grind. They’ve previously worked off-site with groups of up to 30 people.

They also have ideas for growing the business. “We are looking to launch a bulk-ordering program. We’re also looking to team up with local businesses like gyms, coffeehouses, and breweries,” Dorsey says. “We’re figuring out different events out there that are both artsy and foodie in nature. At the end of the day, it’s all about the experience. Part of why we quit our jobs was to have new experiences in life. We’re trying to keep the same concept.”

Since the business currently operates out of their home, the couple spends the majority of their waking hours together—something they have gone out of their way to make sure doesn’t interrupt their decade-plus relationship.

“It was definitely one of the biggest fears when we first started the business together. We didn’t want our relationship to be impacted by the business. We worked really hard on communicating our emotions and feelings,” Lin says. “Staying accountable to the business and each other is tricky, but it’s very important to achieve success. The trick is to have clearly defined responsibilities that we each manage, and to specify the roles and responsibilities as we learn each other’s working style.”

“Being together 24/7 is definitely a challenge,” Dorsey affirms. “It is also one of the reasons we started this journey together. We never got to spend much time together when we were working full-time in our previous careers. Having said that, we have found it is very important to find the time to take for ourselves as individuals.”

To help unwind, Dorsey and Lin take part in their own independent activities like going to the gym, running, and playing video games.

In the meantime, though, they’re building their business—dumpling by dumpling—and showing Houstonians how food can inspire fellowship. Through it all, they’ve also remained true to their virtues.

“Having our own business gives us the freedom to try something we couldn’t have done [previously]. One of the things I believe in is being true to yourself. It’s sometimes hard to do that in the corporate environment. I thought that if I came out, I would get fired,” Lin admits. “You’ve got to be yourself and show your vulnerability when you launch a new product. If we fail, we fail. We are a ‘pop-and-pop’ business. We know that will turn some people off, but if we are going to do it, we are going to do it as real people.”

Keep up with the Dumpling Dudez at dumplingdudez.com, on Instagram via @dumplingdudez, or by emailing [email protected].