Since winning RuPaul’s Drag Race All Stars 3 two years ago, Trixie Mattel has been busy at work building her fantastic pink-plastic life. The Barbie-inspired drag queen has gone on to tour across the world, start her own cosmetics line, and even film a documentary bio entitled Moving Parts.Mattel has also explored other creative avenues by posting makeup videos to her personal YouTube channel and reacting to the Netflix original series like Dolly Parton’s Heartstrings. (Mattel and Parton share a love for big blonde hair and folk music.) Mattel has done all of this with her friend, co-star, and co-writer Katya Zamolodchikova, a fellow season 7 contestant from RuPaul’s Drag Race with whom she hosts the popular YouTube series UNHhhh. Prior to Mattel’s March 8 performance in Houston at the Wortham Center, the Milwaukee native spoke with OutSmart to discuss her upcoming projects.

Martin Giron: What have you been up to since you last went on tour?
Trixie Mattel: In 2019, I turned 30, had huge business growth, and entered the third year of a relationship.

Is that what “growing up” means to you?
I’m now at the age where, as a gay person, I’m looking at everyone else and asking myself, “Have I done nothing?” I don’t have a family or kids. A lot of us, especially gay people who don’t have kids, [feel like] we have no legacy. So it’s like, do our lives even matter? Are we just taking up space and buying clothes?

Also, I’m at this turning point with drag. I’m a lifer now. I can’t just go down and do a shift at Coldstone. This is it. Crossdressing is it for me. Given that I’m getting older, and recently hit 12 years of doing drag, I’ve been having some dark self-reflections. That’s really what made the Grown Up tour happen. Let’s talk about being an adult, and how you never really are one. You’re just an old child. 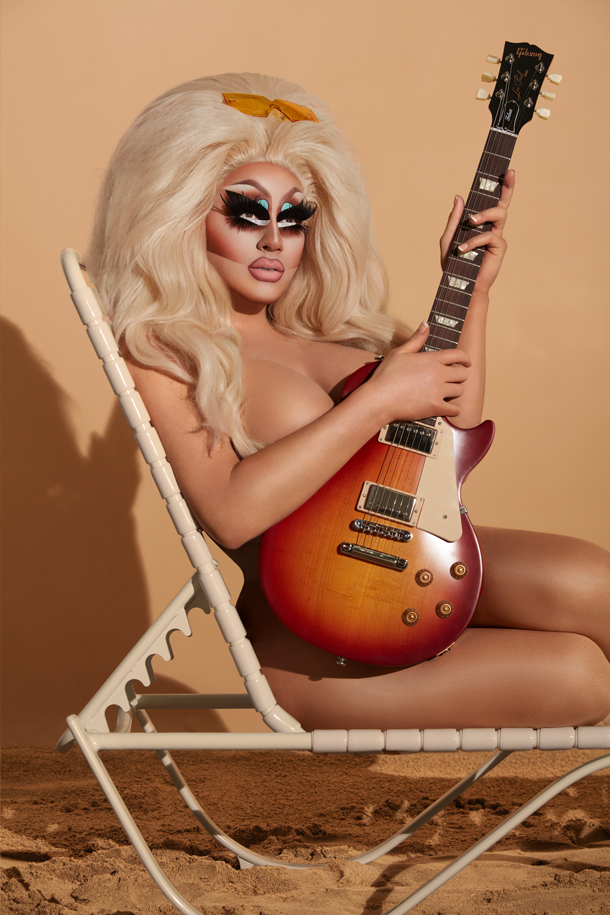 What does the writing process for your comedy skits look like?
I usually write down jokes all year, based on whatever experiences I’ve had. At the end of the year, I sit down with all of the jokes on note cards and tack them on the wall with double-sided tape and I look at it like a serial killer tracking another serial killer. Then I ask myself: What’s the connection here? What was my overarching experience? And, what does that say about where I am in life?

Is this similar to how you wrote your book with Katya?
There was a big switch [to get into the writing process] for the book. A book sounds like, “Oh, I won’t have to get into drag! That’s great. I’ll be Gale Weathers writing The Woodsboro Murders, and wear a side pony and type on my computer.” But Trixie and Katya’s Modern Guide to Womanhood took a long time. We wrote it throughout the year and had to do lots of photo shoots for it. There were at least 10 days of photo shoots.

It’s basically a handbook to prepare yourself for being a young adult woman, written by two middle-aged men [who are drag queens]. We cover the basics like hair, makeup, being broken up with, and getting your period. Katya literally wrote a haiku about getting your period in this book. It’s a great book, and I’m very proud of my sections. I’ve known Katya for probably five years, and that bitch is crazy. I don’t even know if she read my sections, but I read hers. If you think she’s weird now, you’re going to read this book and ask yourself if she’s okay. It has that energy.

Speaking of Katya, how is filming for Season 5 of UNHhhh coming along?
It’s good. I can’t believe we’re still doing it. I think we’re on episode 120 or something. We love it, and it’s led to so many other things. It never feels like work, either. We get to show up, pick out our looks for the day, put on our makeup and wigs, and talk about whatever we want. I’m in this shit, and I still watch it and cry laughing. Katya and I watch it and scream. Every week when an episode comes out, we text each other like “Oh my God, did you watch it yet?”

Tell me about your new album Barbara.
The album is built like an 8-track. The first four tracks are very upbeat, bright, and sunny. They’re supposed to be like a day at the beach with the AM radio playing in your dune buggy in 1969. The last four tracks are supposed to be like that beach at nighttime—those songs are more folksy. I moved to California a few years ago, so I live in a perpetual summer. I also love the ’60s in general, so I really got into this ’60s summer fantasy.

It’s called Barbara because that’s Barbie’s real name. I wanted to go back to the beginning and [rediscover] why I became Trixie and what my original vision for her was. I [first] imagined Trixie as this Malibu Barbie who told really dark and sad jokes—she’s impossibly beautiful but deeply dysfunctional.

What’s next for Trixie Cosmetics?
There are new lip colors coming out in the spring. Katya and I are working on a beautiful blood-red matte color called Red Scare. Last year we released about 17 products, and this year we’re launching probably twice that.

Which product from the line do you recommend most?
The Summer of Love Blush Palette. 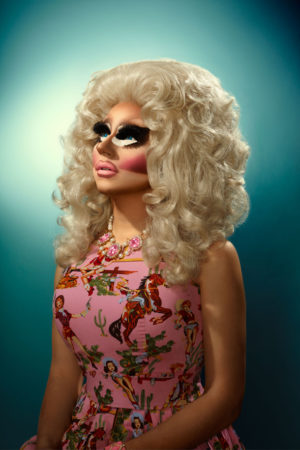 Tell me your favorite thing about performing in Texas.
Getting drunk and eating Whataburger. [Laughs] I love Texas—let me tell you about Texas. Texas is one of the only places I can go where I don’t look crazy. There are a bunch of homosexuals who had very oppressive Southern upbringings. They like big hair, big earrings, big everything, so they also like my style and dark sense of humor. Texas is like a melting pot—the homophobes and the gays both turn up to Dolly Parton at Applebees. A straight guy there once told me, “We love Jesus, but we worship Dolly Parton.”

Favorite Dolly Parton song?
“Wildflowers” or “Coat of Many Colors.”

What are some things fans can expect to see from the Grown Up tour that’s different from your two previous tours—Ages 3 and Up, and Moving Parts?
Whenever I finish a project, I die. And from the ashes of exhaustion, I wake up, shake off the spiritual hangover from touring for a year, and ask, “What’s next?” I’m so fickle, I don’t try to make a show that’s drastically different from before, but my life is always changing, so the material is always about something new. Ages 3 and Up was about being broken up with, Moving Parts was about when I was single, and Grown Up is about being in [a long-term] relationship and keeping the wheels on that motherf–ker. And because it’s a new show of mine, I also matured the production. There are five times more costumes, more wigs, bigger, crazier videos, and a live band.

Keep up with Trixie Mattel on social media @trixiemattel.