This month, we welcome digital artist Angel Albarran to the pages of OutSmart as the illustrator for Lilly Roddy’s 2020 horoscope columns.

“OutSmart contacted me out of the blue,” Albarran says. The 27-year-old digital artist also has an interest in astrology. “Being a Pisces means I’m very aware of myself,” he explains. “I don’t follow my horoscope day-to-day, but I do take it into account. I did a star chart for myself, and it was pretty accurate.”

The native Houstonian describes his OutSmart horoscope illustrations as being very ethereal, but not too serious. “I like the idea of not taking yourself too seriously. All 12 illustrations are based on people I know in the LGBTQ community.”

Albarran was always interested in art, and when he was younger he wanted to be a painter.

“But as I grew up, I started looking at signs and marketing art and thinking about how I could improve them.” He graduated from The Art Institute of Houston in 2013 with a bachelor’s degree in graphic design, and is currently a digital artist and manager of the graphics team at Skyline Art Services. 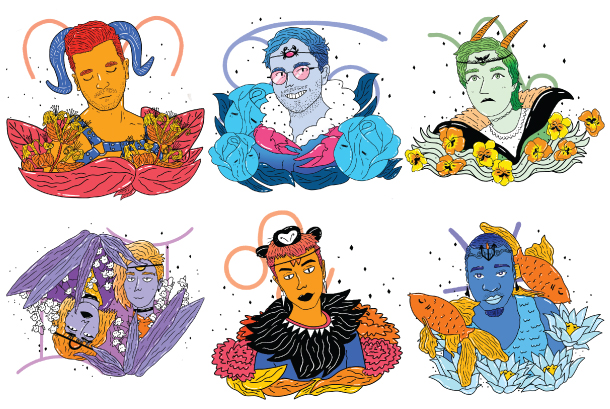 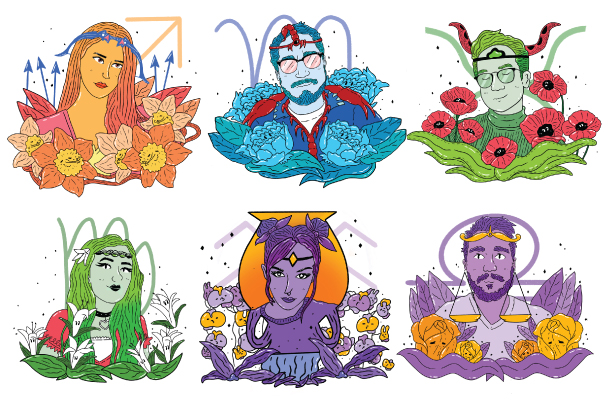 The company specializes in multimedia art displays for public spaces around the country, and particularly for hospitals. If you’ve been to the University of Texas Medical Branch Health Education Center in Galveston, you’ve seen their work.

“We make hospitals cool, [so they are] happier places for the patients,” Albarran says. “I love working there; it truly is a gift.”

And every November since 2012, Albarran takes part in Via Colori, the street chalk-art festival that supports the Center for Hearing and Speech. That Houston nonprofit teaches deaf children to listen and speak without using sign language.

But chalk art is just one of his hobbies. According to his bio, he is also obsessed with trivia about things that were relevant 20 years ago, including all things Pokémon and Mean Girls.

Albarran was married last September to a man who is passionate about photography. They support each other’s art, and they also enjoy traveling and their five-year-old rescue dog named Benson. “He’s a pit bull-Dalmatian mix,” he says. “He has spots on his back. It’s not something you see very often.”

Albarron is excited about the new year because he’ll be working on a mural design, a billboard in Houston, and graphics for a trade show, among a lot of other projects.

For a sampling of Albarran’s work, visit his Instagram page at @themercybeard/