M ake that two-for-two at national pageants for Desi M. Andrews, the Houston hoofer who became the first Texan to win Mr. Continental at this year’s Labor Day weekend of competitions in Chicago.

The dazzling festivities also paid tribute to Tommie Ross on her 20th anniversary as Miss Continental, and saw a fellow Houstonian, Dessie Love-Blake, place in the Top 12, competing as Miss Texas Continental 2019.

“The fans in Chicago were really, really excited because they have never had a Texas boy win,” says Andrews, who lives in Bellaire. “They welcomed me with open arms and can’t wait to see what I will bring to the table.”

Andrews is a former Mr. Gay USofA (2016), who captured both national titles without winning outright a state or regional preliminary.

At Mr. Continental, he competed as the second alternate at this year’s Mr. Angel City Continental contest in San Antonio, and he referenced his underdog can-do spirit in the Top 5 onstage question-and-answer category.

“I said I have so much passion for the Continental system that I wasn’t going to let anyone tell me that I couldn’t win [the national crown],” he explains. “I said, ‘I got back up, dusted off my shoulders, and came back even harder.’” 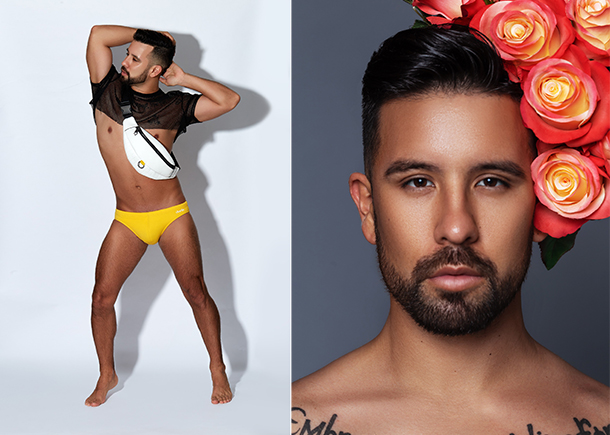 Andrews hails from Albuquerque, New Mexico, where he started dancing “as a kid on a super-small dance team.” That led to backup dancing for female impersonators and a trip to Houston six years ago, when he met Manny Vega, aka Manny Marxx, Mr. Gay Texas USofA 2005.

“Manny and I connected in a way that I’d never connected before,” says Andrews. “We like doing the same things; we are kind of like the same person. We started dating long-distance, but after three months, I said, ‘I can’t do this anymore,’” so he moved to Houston and married Vega.

On the talent scene, Andrews found favor with San Antonio drag star Rita Andrews, who would become his drag mother, as well as other Andrews siblings Sasha, Janet, Roxy, Nikko, and Eric.

“We are super-close,” he says.

When Andrews won Mr. Gay USofA with a hip-hop routine to multiple songs, the 12-year-old niece who was living with him and Vega danced with Andrews to Fifth Harmony’s “Work from Home,” which features Pearland’s Normani Kordei Hamilton on the pre-chorus.

For Mr. Continental, Andrews choreographed a number with Bob Fosse-style moves that he performed with six dancers to Charlie Puth’s “Attention” and a Jonas Brothers medley that included “Sucker for You.”

“Continental is a lot different from USofA,” he says. “It is super-fast, a lot of very quick categories; you finish one, then rush back to get ready for the next one. In USofA, there is interview, talent, and club-wear. The emphasis at USofA is on talent, and you can take your time, cool off, and relax between categories.”

As Mr. Gay USofA, Andrews entertained at 13 preliminary competitions throughout the United States, but he “is shooting for at least 15” preliminaries to Mr. Continental 2020.

“When Miss Texas Continental became available, he turned to me,” says Love-Blake, to see if she would help run the pageant, as well as represent the Lone Star State at the contest over Labor Day weekend. “I gave it quite a bit of thought,” she says, including whether she would dare compete in swimsuit against transgender contestants when she is “a boy queen.”

In 40 years, only four guys have won the crown, she explains. The rest have been trans people.

“My goal was to at least make the Top 12,” she says, explaining that she competed at Miss Continental with the same production number and the same gown that scored so high at MGA in 2018.

For her swimsuit color at Miss Continental, Love-Blake chose yellow because it “was something bold; it stood out” (Andrews also chose yellow for his Speedo-type cut in the men’s swimsuit competition). Love-Blake said, “I wore eight pair of tights to cover the padding that I needed, and over that was a sheer pair for the stage lights.”

Her success at Miss Continental has inspired other cisgender entertainers to consider entering a local preliminary to Miss Texas Continental, including one that’s set for Houston on February 12 at Hamburger Mary’s, a second pageant in Houston, and ones in Austin and Dallas. The top two contestants from each contest will advance to the state pageant in Houston on April 19, 2020, assuring it of at least 10 entrants.

Andrews is lending his support to the Miss Texas Continental system, as well as singing the praises of Mr. and Miss Continental throughout the land.

After winning Mr. Continental, he performed in the “grand march” that opened Miss Continental 2019, an 18-minute production number that featured former Miss winners, including Ross and native Houstonian Kelly Lauren, as they modeled traditional and couture African fashions.

Andrews accepted some Halloween engagements in Chicago, where he planned to portray the villain Jafar in a mix of music from Disney’s Aladdin, as well as dance in the costume of “an evil skeleton.”

“The Chicago crowd likes it sexy,” he says. “I will show a little skin and move my butt a little.”