Mike Webb has seen a lot in just 32 years of living—the trauma of domestic abuse, the loneliness of alienation, and the sting of racism. But these challenges have also been the catalyst for self-examination, discovery, and empowerment.

As the first recipient of Pride Houston’s new Gender Non-Binary Grand Marshal award, Webb contemplates this honor with a laugh: “I’m a queer freaking out.”

Webb was born in Houston in 1987 to young parents—a mother who was 19 and a father who was 20. They had met at Yates High School in the Third Ward, and both went on to join the military before divorcing when Webb was in the first grade. Although Webb’s father didn’t complete high school, Webb’s mother went on to earn two master’s degrees in liberal arts and psychology.

Webb recalls a father who was “well-meaning, but he had to face a ton of challenges including an addiction to alcohol and drugs.” Webb has a younger brother, and they were often forced to see their mother abused physically and emotionally.

Webb’s mother always had “at least two full-time jobs” in order to ensure the boys could attend a private school, “because she knew the systemic obstacles we would have to overcome in order to be successful.” Webb remembers how they would catch the bus after school to spend time with their grandmother until Mom could pick them up, usually after 10 p.m. “For the most part, my brother and I knew we had to take care of each other, no matter what.”

Webb first attended St. Mary’s Catholic School in the Third Ward. Then came Key Middle School for two years. When Webb wrote a love letter to a 7th-grade male student, word got around and Webb was jumped and pushed down a stairway. “I got to a point where I was scared every day, and knew I had to transfer out.”

Key Middle’s instructors felt there wasn’t enough challenge for Webb, and suggested they apply to Chinquapin Preparatory School near the Houston Ship Channel in Highlands. The school provides high-quality college-preparatory education to able and motivated youth from underserved families.

Webb attended grades 8 through 12 there, living with other male students in the campus dorm. “I was a weird kid, skipping physical education and hiding under a desk to read Harry Potter,” Webb remembers.

While at Chinquapin, Webb was editor of the school newspaper, a student government representative, and eventually a dorm captain for the middle-school students, supervising their daily routine and resolving any conflicts that arose.

Webb was especially interested in social movements, observing that “politics can help people who don’t have a voice.” After coming out to close friends and the school administration, Webb wrote an op-ed for the school paper, using anonymous quotes from LGBTQ students who described the anti-gay encounters they had endured at the school. The article prompted officials to investigate their policies and make changes. Webb saw how that effort had created change, which sparked a deep interest in becoming a political activist.

“This is first time in my life I feel accepted. It appears that the tide is turning.”

Webb chose to leave Houston and attend Reed College in Portland, Oregon. “I didn’t grow up in an accepting family. At church, I would routinely hear anti-gay rhetoric. Going to college outside Houston made me independent from that. Reed was a safe place for LGBTQ students. I’d been fighting intolerance all my life, so I wanted to be somewhere that I didn’t have to [do that anymore]. Everyone at Reed seemed to know I was gay when I arrived. Word got around, and that made it so easy to be out.” Webb earned a degree in political science, feeling that government is the primary way to change lives. “Reed had genderless bathrooms in 2005—but my blackness was not equally accepted,” they remember.

Webb’s faculty mentor suggested a transfer to the historically black Howard University in Washington D.C. “He felt I needed to be reminded of my strengths.” Webb fell in love with Washington, “and with myself as a black person.”

Webb secured a part-time internship with Houston congresswoman Sheila Jackson Lee, worked in the Howard bookstore, and had a full-time student course load. Webb then returned to Reed for their senior year and graduated.

Webb moved back to Washington after college to begin working as a legal aide at a boutique law firm focusing on family law. They stayed on in D.C. for three more years, hoping to get a job on the Hill. Although that opportunity never materialized, Webb was able to begin building a professional network.

Then in 2010, a job opened in Mayor Annise Parker’s administration for a VISTA volunteer. “I was very motivated, because I wanted to have an impact and felt I could. This was right at the time I learned I was living with HIV, and it made me very serious about doing something meaningful. I helped 200 kids to better prepare for college—something that never would have happened without the program.”

Webb found returning to Houston exciting. “When I left Houston I was not empowered, but it was exciting to return and re-experience my life.” After the year with VISTA, Legacy Community Health offered Webb a job in its public-health group. “It’s the longest job I’ve ever held—five years. I loved the culture there, and seeing lives changed in front of my eyes.”

In 2016, Webb went to work as an aide to Texas state senator Sylvia Garcia. The job was based in Houston, but Webb lived in Austin during the legislative session and traveled home to serve on the board of the Houston GLBT Political Caucus.

When Garcia became a U.S. congresswoman, Webb began working for Harris County commissioner Rodney Ellis. In 2018, Webb became president of the Caucus, and won a second term this year. 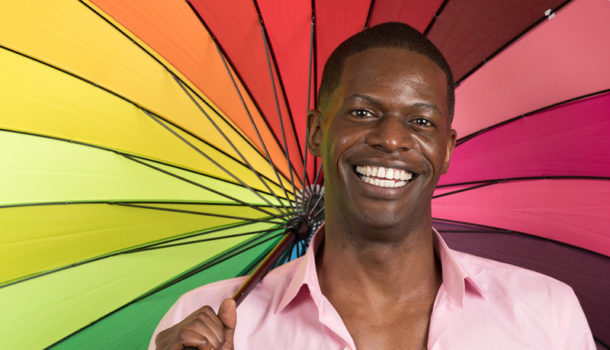 Coming to grips with being non-binary took time for Webb. “It was a part of myself I never accepted. Mentally and emotionally, I wasn’t a man. To simplify, I don’t identify with any gender in binary (male and female) terms. I am somewhere on that spectrum. Many people feel strongly connected to one [gender, but] I’m not connected to either. Being non-binary can translate into different things for different people.”

At first, Webb sort of shrugged off their feelings about gender, thinking “I’m just weird.” But that changed when they listened to Landon Richie, a young trans man, testify against the Texas bathroom bill two years ago. “He was so powerful and inspirational. Being non-binary was a part of myself I never accepted. But I thought if Landon can fight for his targeted community, I need to accept myself. I already have so many layers that I have to fight for—why add one more?” But after self-reflection, and being around people who were fighting to allow transgender people to be who they are, Webb felt that “I need to be an advocate for myself.”

Webb says that even if people don’t understand the non-binary concept, they can still be respectful. “I feel more free when I’m not referred to as male or female. Pronouns are important—it’s like coming out of the closet again. I just ask that people remember the moment they finally learned to love themselves as LGBTQ. That’s how it feels for me to be non-binary. It’s a final step of freedom.”

Webb is aware that being Houston’s first gender non-binary Pride marshal is historic. Just hearing that Pride Houston was considering a new non-binary mashal category nearly brought Webb to tears. “One of largest LGBTQ organizations in the South is recognizing non-binaries. How powerful is that!”

Webb felt very validated when they won this year’s new marshal title. “I like to think of the intersectional coalition that voted for me. It pierced right through the progressive bubbles we operate in.” Webb also thanks Becca Colt-Meier (also a 2019 non-binary nominee) for paving the way.

Webb is happy to be part of “a great team of marshals,” and is also impressed by this year’s African-American representation. Webb has not always felt accepted and loved within many of the community’s sub-groups. “This is first time in my life I feel accepted. It appears that the tide is turning.”