“Nothing is better than being in your hometown—and being celebrated in your hometown,” she says. Part of the reason she moved away was a feeling of not belonging. But that has all changed.

Baldwin and two younger siblings were raised in the ’70s by a single mother who worked for the local phone company. “My mother ran the gamut. She began as an operator, worked installing phones and climbing poles, and eventually moved into management.” Her father, who worked in the chemical-engineering field, became a part of her life again after college.

At North Shore, Baldwin had played basketball, volleyball, and ran track. Although the Barbara Jordan magnet school had no sports and was entirely academic, Baldwin did join the school’s Reserve Officer Training Corps (ROTC) drill team for three years.

“I had a teacher who was very instrumental in steering me toward political science. She saw my potential, and took an interest and encouraged me.”

After high school, Baldwin went into the Army Reserves, reporting for basic training at the Fort Dix Army post in New Jersey. Baldwin liked serving her country, as well as the military discipline and the traditions surrounding military uniforms.

At Sam Houston State University in Huntsville, Texas, Baldwin majored in law enforcement and police science, and eventually took a part-time job as a prison security guard. “I never felt so small in my life. I can still see [those hallways filled with prisoners in their cells]. I felt so helpless in such a big system.”

Baldwin’s college ROTC involvement consumed most of her extracurricular activity, but she did join the Delta Sigma Theta sorority that was founded in 1913 at Howard University. Upon graduation, she was commissioned as a second lieutenant in the Army.

But Baldwin knew she really wanted to go to law school, so she enrolled at the John Marshall Law School in Atlanta, graduating with honors three years later.

During her third year of law school, Baldwin began serving as a prosecutor in a district misdemeanor court. She continued to serve there for another year after graduation before opening her own law firm that specialized in criminal, family, and entertainment law.

Back Home to Houston

In 1999, Baldwin moved to Taylor, Texas, near Abilene, to work in the district attorney’s office as a prosecutor. “It was a small town, and I went into culture shock. I was the only African-American in the courthouse,” she says. A year later, she returned to big-city life in Houston and set up her own law firm that practiced criminal and family law. Houston also made it easier to practice her Islamic faith as part of the city’s large Muslim population.

Baldwin came out in 1995. “It was traumatic,” she says. “In hindsight, I knew I was gay but didn’t start to accept it until my late 30s.” Although her family took the news well, “Parents always have to have a grieving period for the life they had hoped for us.”

Baldwin now has a foster daughter named Miracle, whom she plans to adopt. “She has lived with me since she was six days old. She is now 21 months.”

In 2018, Baldwin made the decision to run for office as a judge in the Harris County Criminal Courts at Law, after several people urged her to run. “I hadn’t quite considered it. I was trying to grow a practice and brand myself here.” But Baldwin had become frustrated with the Republican judges that were then in the majority. “I knew I could be a better judge—and be fair. It was a really big decision to make, and you have to speak truth and be all in. If you lose, there is a target on your back at the courthouse. I had to have the mindset that I would win.”

On November 6, 2018, the Harris County judicial system was swept by the Democrats. All 55 Republican candidates lost, and Harris County now had a majority-blue court system. “It was very surreal. It’s one thing to run, and another to win. It was like a dream,” Baldwin says.

Baldwin and several other judicial candidates held their election watch-party at The Address. “Every time results were posted, people were clapping. The numbers were huge. Harris County really came out in numbers, screaming for change.”

By the end of the evening, the Democrats completely controlled the county courthouse, ending decades of Republican domination.

“I was floating through the party that night, trying to grasp the enormity of it.”

During the campaign, Baldwin became one of the “Houston 19” group of female African-American judicial candidates. “We didn’t realize at first that we were all running, until we kept running into each other at candidate meetings. But we knew that there was an African-American female voting trend across the U.S.”

“Black women reached out to their mothers, sisters, aunts, and cousins. We never had a lot of money, but we had growing support.” After taking note of a group picture showing all of the black female judges running in Atlanta, the Houston women pitched the “Houston 19” photo idea to Harris County Democratic Party chairperson Lillie Schechter, who then hired an aide to work exclusively with African-American women.

The now-iconic photo was taken on a Saturday morning in the Thurgood Marshall School of Law building at Texas Southern University. Everyone was told to wear black-and-white wardrobe accessories. “It took about two hours to get everyone together and posed.” The photo became a huge hit on Twitter, with the hashtag #Houston19. When all 19 women won, the photo trended even higher. 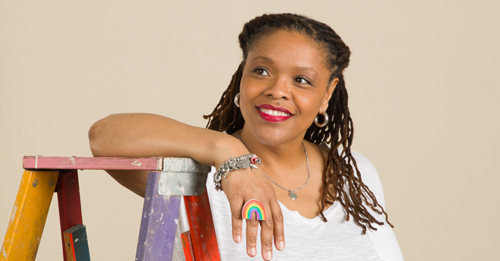 “The first day of work, I walked around a lot just to see all the other women in their courtrooms. And then I noticed they were looking in my window, or coming in to sit for a while. It was so much to take in.”

“When my name is announced as I enter the courtroom, I always smile,” Baldwin admits. After 20 years on the other side of the bench, she is in her element in the judge’s seat. Baldwin has a staff of five, whom she loves. “They all reflect the openness and understanding that we want to project. There is a ‘new normal’ in the Harris County Courts these days.”

The court system’s new Democratic majority ended a lawsuit begun by their Republican predecessors to prevent the bail-bond system from being reformed. “Poor people were in jail for excessive amounts of time, awaiting trial. They lost their jobs, houses, and families. Now, most people are released on personal recognizance for lower-level misdemeanors.”

Baldwin says that she watches the faces of the defendants who appear before her.  “African-American women definitely look more relaxed when they see me. And quite often, they come up during a recess and tell me how proud they feel, seeing me on the bench.”

Baldwin says that when she agreed to let a friend nominate her for this year’s female Pride marshal, she only knew that it was an “important” LGBTQ community tradition. “My supporters told me what to do—when and where to show up.”

This year’s marshal announcement event occurred on Baldwin’s birthday. Since she had to travel out of town and miss the announcement, she made a video that could be shown to the crowd in case she won.

Baldwin followed the announcement event on Facebook Live, and admits that it was yet another surreal moment when she won. “It was really the icing on the cake,” she says. Commenting on all of the other African-American marshals who were elected this year, Baldwin says, “I never realized the true impact of diversity until that night. It’s a great sense of not being alone and actually belonging.”