Asia Kate Dillon isn’t a judgmental person, which makes their latest role as The Adjudicator something of a stretch.

“I really try hard to not assume anything about anyone,” says the non-binary, pansexual-identified actor, “unless I’m in a conversation with that person and they have space to tell me who they are—how they identify or what they’re interested in. I like to let other people tell me who they are.”

The same cannot be said for Dillon’s Adjudicator character in John Wick: Chapter 3—Parabellum, the Keanu Reeves-led action franchise about legendary former assassin Wick (Reeves), who is forced back into a dangerous underworld of murder, betrayals, and strict rules enforced by a powerful international assassins’ guild, the High Table.

Directed by former stuntman and martial artist Chad Stahelski (who doubled for Reeves in The Matrix films), the series is beloved for its relentless action, its evolving, inventive world-building (which includes Dillon’s enforcer of violent High Table judgment) and its co-stars Halle Berry, Ian McShane, Laurence Fishburne, and Anjelica Huston.

Lawrence Ferber: Keanu came up with the role of The Adjudicator. How did the character evolve once you got cast?
Asia Kate Dillon: Both Keanu and Chad had a vision for this character as someone who could walk into a room and unsettle anyone—including people who you don’t think can be unsettled, like Ian McShane’s Winston, and John Wick, in particular. [The Adjudicator needed to be] a character who could also give a deeper glimpse into the world of John Wick and the High Table. It’s really fun to be a new character in an existing franchise, and take people deeper into that world.

Alas, you don’t get to do any physical ass-kicking yourself in this installment. Disappointed?
While the role of The Adjudicator doesn’t pick up arms in this film, they use something else—a quiet intensity and power and confidence that was really fun for me to play.

You have a great cringe-inducing scene with Laurence Fishburne’s character, The Bowery King, who lords over flocks of rooftop pigeons. I’ve got to ask: was there a lot of pigeon-pooping going on?
It’s funny, I don’t think so. The pigeons are professional birds, very well trained, incredible to work with. Incredible costars.

“If you’re making art and don’t have queer, trans, and people of color in your project, you’re not accurately representing the world.”

One element of the John Wick universe is a switchboard through which people order assassinations, and I believe that I spotted at least one trans person on the switchboard. The Wick films are getting very queer with representation, aren’t they?
Totally. I was a fan of the first two, and one of the things I appreciated was the diversity. There are so many kinds of people—all sizes, colors, sexualities, ethnicities, cultural backgrounds. It feels like a more accurate reflection of the world than a lot of media are willing to portray, and this film adds gender diversity with my character. I think if you’re making art and don’t have queer, trans, and people of color in your project, you’re not accurately representing the world.

Do you find that filmmakers are writing more roles to incorporate and represent non-binary and transgender identities today?
Scripts are coming my way, and more non-binary and transgender characters are being written, but I’m just one example of what a non-binary identity can look like. I think there’s an idea of a non-binary identity that is predominantly white-bodied and androgynous. Someone born female and wearing pants on a red carpet is held up as someone who should be admired, but someone [who is] born male, particularly a person of color, who wears a dress on the carpet is still going to be ridiculed. Some of these people receive death threats—people I know. We’ve made a tremendous amount of progress, and the long arc of history [bends toward] justice, but we have to keep fighting for justice and visibility for people on the margins. 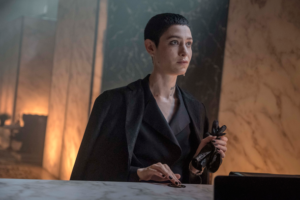 Whose life story would you love to portray?
The first name to come to mind is Mary Martin, who means something to me in particular because she starred in a version of Peter Pan that was live-action-to-tape that I watched over and over as a kid. I’d be fascinated to learn more about her life and play her.

The German word for empathy, einfühlung, is tattooed on your neck. Are you thinking of getting more ink?
Oh yeah, for sure. There are so many I want. My lucky number is 37, so I know that’s something I want.

I hear you’re working on your first music project. Can you share some details?
I’ve been a singer my whole life, and the time feels right to put my own music out. I found a producer I’m excited to work with, and the sound will be an amalgamation of all the music I love, going back to soul, the blues, and rock and roll.

Although you’re not a judgmental person, would you come to a conclusion or two about someone wearing a MAGA hat?
We’re certainly living in a time in this country where the hateful rhetoric that’s coming from 45’s administration is having severe and very real consequences for people who have been historically marginalized and disenfranchised. So I would keep my distance, because “safety first!”