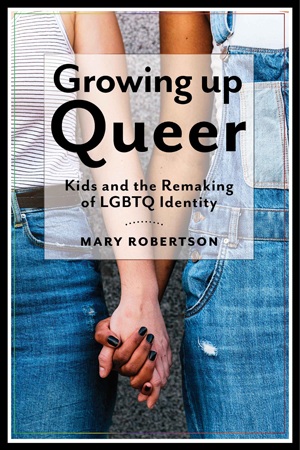 Growing up is hard. Most sentient adults would agree and decline a chance to “teen again”—between changing bodies, Mean Girls, bullies, and facing adulthood, it’s enough to have endured it once. But for kids who are “different” on top of all that, there’s hope, as Mary Robertson says in Growing Up Queer.

In the early years of the Obama administration, after the repeal of DADT and after three states made same-sex marriage legal, Robertson began volunteering at her local LGBT Resource Center, specifically in the basement teen hang-out called Spectrum. She was working on research and she hoped, over time, to interview Spectrum’s teen clientele. But she was nervous: as a cisgender straight woman, what would the kids tell her?

Plenty, as it turned out.

While there were gay, lesbian, and transgender teens at Spectrum, the majority of the youth Robertson studied called themselves “queer,” a wider sexuality- and gender-encompassing identity specifically separate from “gay” or “lesbian.” As one young man indicated, identifying as queer was easier than repeatedly resetting his self-identity as he learned more about himself and the people he might be attracted to.

Many of her interviewees told Robertson that they knew early in their lives that they were not heteronormal. Many teens told stories of recognizing their own interest in same-sex actors and performers when they were young, and of precocious self-acknowledgment of same-sex leanings. One claimed innocence that compelled him to ask for clarification on slurs, thus learning negativity about his feelings long before he knew his feelings “had a name.”

Robertson says that suicide rates for LGBTQ students are inflated, and that today’s queer teens have access to an abundance of support. Her subjects often noted family attitudes that have shifted with the times, and there seems to be more acceptance from peers. Gay-Straight Alliances weren’t widely known in high schools until the 1990s, but today most larger schools have a GSA, and nearly every state in the U.S. has at least one LGBT center. For her queer subjects, this is good news, says Robertson.

On the future, she says, “This is what gives it so much promise.”

As eye-opening and reassuring as it is, this book may be a challenge.

Growing Up Queer can sometimes read like a thesis paper made of cardboard, perhaps due to its original intent for research. When the narrative dips like that, it feels a lot like when your newly-PhD’d brother expounds on his favorite subject: it grows complicated, often unnecessary, and sometimes redundant.

Thankfully, author Mary Robertson gets out of the way enough to make a reader want to forgive such transgressions and just enjoy the teens she meets. They have life in them, deep introspection and philosophical thought, as well as acceptance covered slightly with the scabs of perseverance. Their voices are real and need no explaining.

Indeed, they do offer hope.

That makes this book accessible, but academics may get more from it than will casual readers. Tackle Growing Up Queer if you wish, but a full understanding may come hard.