After Denise O’Doherty moved from New York to Houston in 1981 to work as a psychiatric nurse, she was shocked to witness colleagues belittling a transgender patient.

“Within my first week at the hospital, I heard nurses and doctors make fun of a patient in the process of their transition,” O’Doherty recalls. “In that moment, I decided that I wanted to understand gender issues and practice therapy.”

A year later, O’Doherty began working part-time at the Montrose Center, where she counseled trans and gender-nonconforming clients and their loved ones. She later left her nursing job to become a full-time therapist. For more than 25 years, she has owned a private practice in Houston, specializing in relationships, substance abuse, and gender issues. 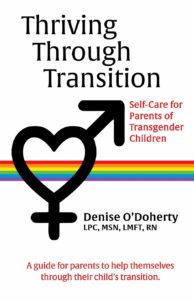 In addition to her practice, O’Doherty has offered advice through her blog, online classes, and workshops. Her latest guidance project is her new book, Thriving through Transition, a self-care manual for the parents of trans children.

Thriving through Transition, now available from Amazon, is a seven-chapter guide that outlines how people can come to embrace their trans children. Exploring topics such as grief and religious and societal conflicts, the book discusses how a parent at any stage of acceptance can reach complete approval of their child’s gender identity.

“It’s important for the parents of trans kids to be supported, because the challenges they face are not mainstream,” O’Doherty says. “I wrote my book to validate parents’ feelings and to help give them a sense of what’s going on in their lives.”

While there are other books for the parents of trans children, most were written to help them understand their kids’ needs. Thriving through Transition differs from these books because it focuses on the parents. O’Doherty believes that by dealing with one’s emotions, parents can become better equipped to raise their trans children.

O’Doherty pairs each topic of her book with the real-life experiences of clients. She says she included these excerpts because many of the parents’ testimonies, despite their backgrounds, had commonalities.

The parents of trans kids almost always almost face “transition grief,” a phrase that O’Doherty coins in Thriving through Transition. The term explains the personal loss that people feel when having to let go of relationships with their children as they knew them prior to the gender transition.

“Whether a child is five or 50, their parents often face a multitude of emotions when children come out as trans,” O’Doherty says. “It’s important that they know what to do next, and most importantly, know how to care for themselves in the process.”

Digital and print copies of Thriving through Transition can be purchased online
at Amazon.com.

O’Doherty grew up in Long Island, where she says queer people were accepted and embraced. Every summer, her family took a ferry to Fire Island. On the back of the ferry, O’Doherty saw LGBTQ Manhattanites dancing and laughing, and she longed to join them.

As she got older, O’Doherty began sitting in the back of the ferry. There she made gay and trans friends and began visiting LGBTQ bars. Even though O’Doherty was brought up Catholic, she says that she was taught to appreciate everyone.

“I was raised in a New England conservative environment, but GLBT people were very much a part of our culture,” O’Doherty says. “I grew up with them. Many out GLBT people worked in theater, or as choreographers and makeup artists. These people were loved for their artistic contributions.”

O’Doherty received her bachelor’s in nursing from the State University of New York at Stony Brook. After she got her master’s from the University of Florida, O’Doherty moved to Houston to work at St. Joseph’s Hospital as a psychiatric nurse.

As a therapist at the Montrose Center for a year and a half, O’Doherty counseled with trans, non-binary, gender non-conforming folks and their families; led support-group meetings; and spoke at national conferences.

She also met gay therapist Bill Scott, one of the Montrose Center’s founders. Scott had a private counseling practice and asked O’Doherty to join his team part-time. O’Doherty worked at St. Joseph’s and with Scott until she decided to leave nursing.

“My goal has always been to improve the lives of others by helping them work through their emotions,” O’Doherty says. “I love my job, because every day I get to witness people make changes in their lives for the better.”