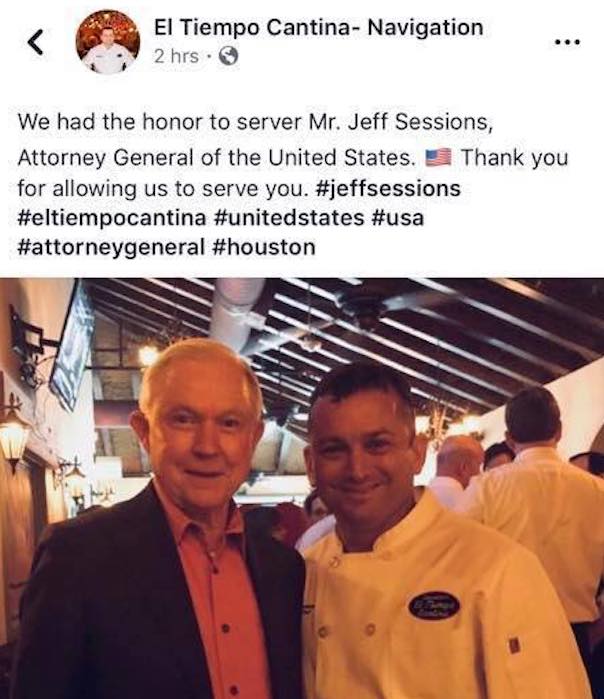 “We had the honor to server (SIC) Mr. Jeff Sessions,” El Tiempo’s post stated. “Thank you for allowing us to serve you.”

In response to fierce backlash, El Tiempo later deleted the photo, and offered an explanation. 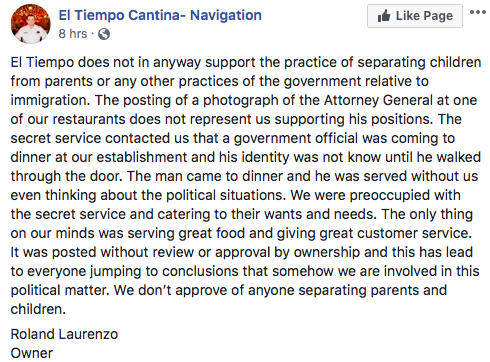 “El Tiempo does not in anyway (SIC) support the practice of separating children from parents or any other practices of the government relative to immigration,” the restaurant wrote in a statement signed by owner Roland Laurenzo, Domenic Laurenzo’s father. “The posting of a photograph of the Attorney General at one of our restaurants does not represent us supporting his positions. … It was posted without review or approval by ownership and this has lead (SIC) to everyone jumping to conclusions that somehow we are involved in this political matter.”

Many did not appear ready to accept the restaurant’s mea culpa, and by late Friday, the hashtag #BoycottElTiempo was gaining steam.

“Too late and lame excuse — true colors shining for all to see!” one commenter wrote. “See that happy smiling photo — a picture paints 1,000 words. Too late.”

El Tiempo’s seven locations include one in the heart of Montrose, Houston’s gayborhood.

In a 2016 Houston Chronicle article, Domenic Laurenzo said he supported Donald Trump for president. He also said Roland Laurenzo had approved a rally for the Houston Latino Trump Coalition at one of the restaurant’s locations.