Hateful rhetoric and discriminatory bills have resulted in elementary-age students being less accepting of LGBTQ people than those in middle and high school, according to Robert Sanders.

“I’m worried about my students,” says Sanders, an author and fourth-grade teacher in Florida who identifies as gay. “I’m afraid that their attitudes toward equality will swing back. Kids just a few years older than them are very respecting of everyone’s differences, but my students are growing up in a different world, with different role models.”

To teach his students and others like them about LGBTQ history, Sanders wrote Pride: The Story of Harvey Milk, a picture book about the pioneering gay politician and the creation of the LGBTQ Pride flag. Illustrated by Steven Salerno, Pride was released April 10, and is now available in stores and online.

The book is one of about 40 LGBTQ children’s books in circulation, and the first about Milk and his collaboration with Gilbert Baker, the artist who designed the Pride flag in 1978.

Sanders’ book was initially set to be released last year, but a scheduling conflict with Salerno coincidentally pushed back its debut to 2018, the 40th anniversary of the Pride flag’s creation.

“The importance of Pride has changed since I wrote it in 2015,” Sanders says. “I wrote the book as a celebration of the huge progress we saw as a community, but a lot has happened since then. I didn’t envision at the time that the pendulum would swing back and that LGBTQ people would once again have our lives threatened.”

According to the Human Rights Campaign, state lawmakers introduced 252 anti-LGBTQ bills across the nation in 2016, the year after the U.S. Supreme Court’s Obergefell decision, up from 85 anti-LGBTQ bills in 2014.

“I saw rainbows all over the world,” Sanders recalls. “From Niagara Falls, to San Francisco City Hall, all the way back to the White House, I saw them all washed in the colors of the Pride flag, and it dawned on me that this was a story that kids needed to know. I wanted to teach them the origin of this symbol and why it is still important.”

Sanders wrote the first draft of the book that night. For his research, he relied on history books, news footage,  and documentaries. 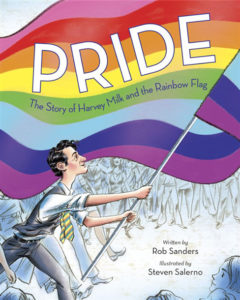 Baker read a draft of Pride before he passed away in 2017. He approved of the book and told Sanders about his personal experiences with Milk, which had not been recorded in other archives.

“Gilbert gave me some of the best insights that I did not find in any of my other research,” Sanders says. “Working with him to tell this story was a wonderful way of passing on his legacy. He got a say about the book and was able to clarify some of its details.”

Though Sanders’ target audience is children ages 5 through 8, he believes the book is a good starting point for anyone who wants to learn the basics of one of the milestones in LGBTQ history.

The illustrations accompanying Sanders’ words depict moments when LGBTQ people were discriminated against, as well as their protests and victories. Older readers can look at Salerno’s paintings and research them, Sanders says.

“I hope that this book starts getting more people talking about equality and hope,” Sanders says. “Everyone needs a symbol that represents who they are, and we can learn to respect each other’s symbols.”

Sanders, a Missouri native, has loved writing since he was a child. His life goal was to be an author of children’s books, but he didn’t write any until after he began teaching.

His first book, Cowboy Christmas, was borne out of a request from his students. It was 2008, and Sanders had just turned 50.

“My students would ask, ‘Where are your books, Mr. Sanders?” he recalls. “I took that as a challenge and started writing. My first book came out in 2012.”

In addition to his six published books, Sanders has three more on the way. Peaceful Fights for Equal Rights, set to be released in September, and Stonewall: A Building. An Uprising. A Revolution., debuting in 2019, will be LGBTQ history books.

Sanders says in recent years, three of his students have struggled with their gender identities, and several others have come out as LGBTQ. He hopes his books inspire children to be brave, respectful, and aware of the queer community’s accomplishments.

“I want these children to know that there is hope,” Sanders says. “I think every generation needs someone like Harvey Milk to give them that.”