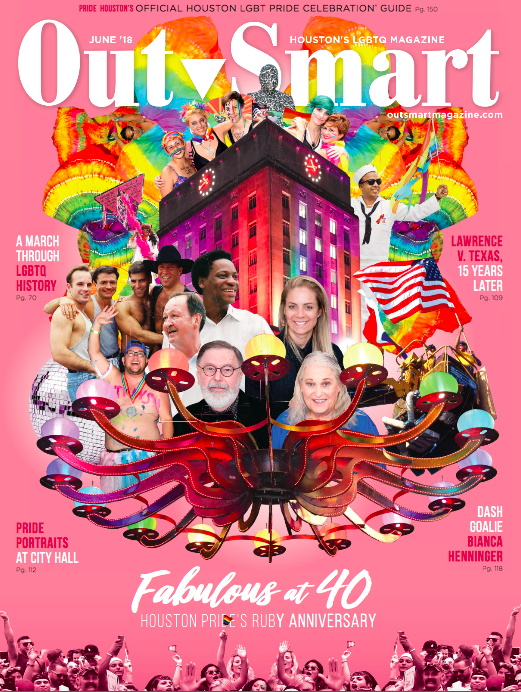 At 212 pages, this is OutSmart’s largest issue ever. We’d like to think it is also one of our best.

Fresh off the magazine’s own 25th anniversary in April, it is time to celebrate 40 years of Houston Pride.

In his comprehensive history of the Houston celebration, writer Brandon Wolf notes that 40 years ago this month, LGBTQ activists gathered for Town Meeting I, which gave rise to many of the organizations and institutions that have since shaped the local movement—including, one year later, the parade and festival.

Wolf has also compiled the definitive list (which was no small task) of  previous grand marshals. This year, Pride Houston will honor these past marshals instead of electing new ones. However, a committee of those past marshals has also selected three honorary ones for the 2018 parade—Bob Briddick, Julie Mabry, and Josephine Tittsworth—whom we profile in this issue.

When Houston Pride began in 1979, it was the only annual parade in the state. This year, there will be a record 28 Pride celebrations in cities across Texas, from Amarillo to Beaumont, writer Lourdes Zavaleta reports. But even if you decide to remain in Houston, there will be plenty to do—our annual calendar of local Pride-themed events lists at least 40 in June.

We also focus in on several of these events, including the Houston Dash’s Pride Night at BBVA Compass Stadium, and the T.R.U.T.H. Project’s “Feel My Pride Too!” celebration featuring LGBTQ artists of color. And we introduce a new column, “Unapologetically Trans,” by Houston activist Monica Roberts, who reflects on the meaning of Pride as a black trans woman.

Elsewhere, columnist John Nechman notes that in addition to the 40th anniversary of Pride, June marks the 15th anniversary of Lawrence v. Texas, the U.S. Supreme Court’s ruling in the Houston case that struck down sodomy laws in Texas and throughout the nation.

Indeed, it is amazing how far, and how fast, the movement has come. When activists were planning Town Meeting I, Harris County officials attempted to prevent the gathering after being pressured by religious leaders who called homosexuality “a sin and contrary to all natural law and decency.”

Today, we have an openly gay Democratic nominee for Texas governor. And this month, in addition to again being lit in rainbow colors, Houston City Hall will house a Pride Portraits exhibit featuring same-sex couples.

As we reflect on this progress, we should also consider how fragile it is, especially given today’s political climate. Moreover, we should remember the words of straight ally Frances “Sissy” Farenthold at Town Meeting I: “No one is free unless we are all free. We cannot open the door to some minorities while denying access to others.”