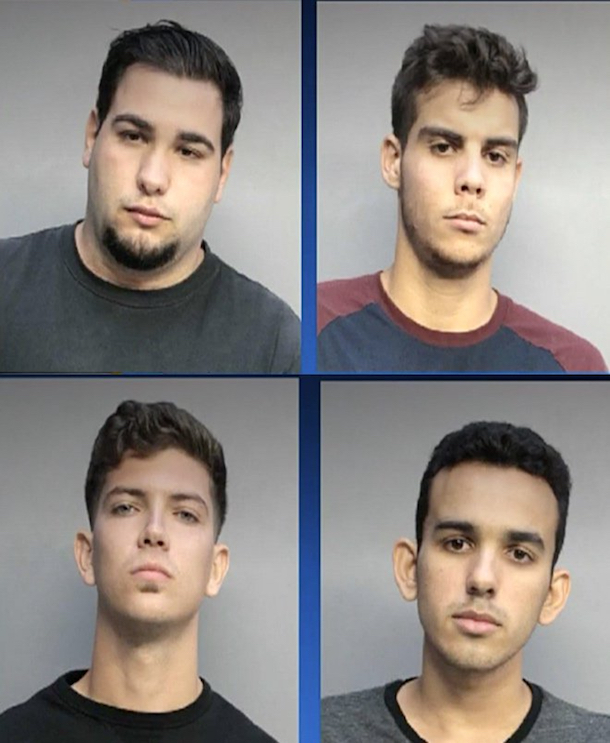 Defendants face felonies in beating captured on video in April.

The attack occurred several hours after the April 8 event, outside a public restroom on the parade route.

Surveillance footage (below) of the incident shows four people pouncing on two men outside the restroom. On the video, the group takes turns pushing and punching the two men in the head as a bystander tries to intervene.

The men are identified as (clockwise, from top left) Pablo Reinaldo Romo-Figueroa, 21, Luis Alonso-Piovet, 20, Juan C. Lopez, 21, and Adonis Diaz, 21. Each face two counts of aggravated battery with prejudice for each victim, according to the court documents. The charging document accuses the defendants of intentionally targeting the victims because of their perceived status.

CNN has reached to out to the defendants’ lawyer for comment. Each entered a written plea of not guilty on April 10, according to court records.

Since then, prosecutors considered whether the hate crime enhancement should be applied. Such an enhancement could bring harsher penalties.

Alonso faces an additional charge of assault with prejudice for allegedly threatening one of the victims, who told police that he yelled an anti-gay slur before hitting him several times, according to a police report.

The bystander was knocked to ground in the chaotic tangle, and the footage shows his head striking the pavement. The defendants face an additional charge of aggravated battery for his injuries, which apparently required staples for treatment, according to the charging document.

“I commend the investigative work of the Miami Beach Police Department and my Hate Crimes Unit prosecutors in this case,” State Attorney Katherine Fernandez Rundle said on Twitter.