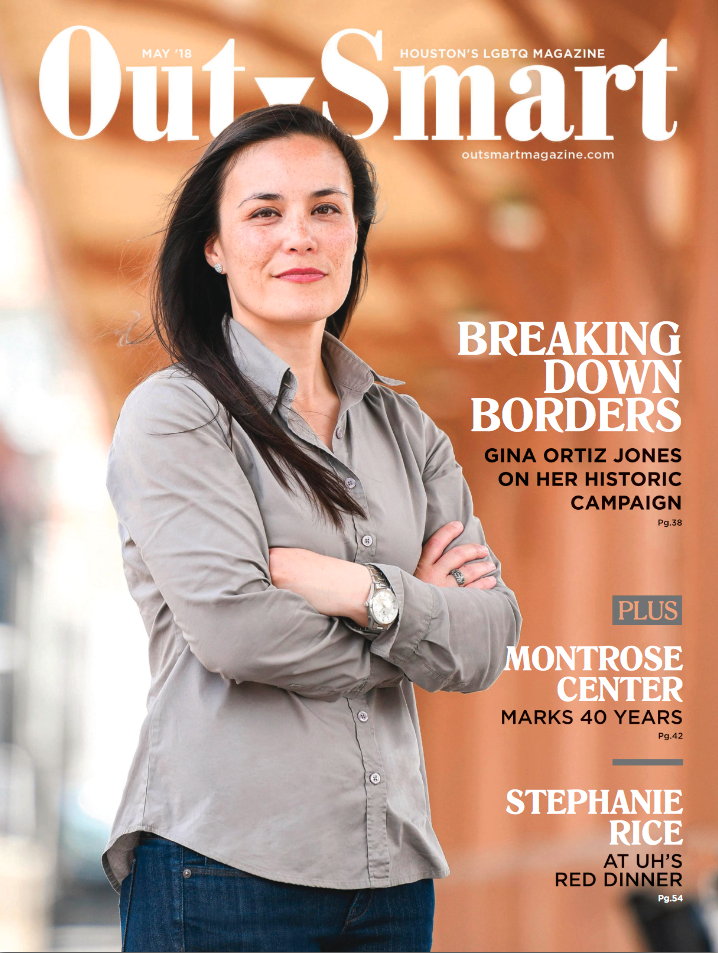 It’s an exciting time to be part of OutSmart.

“We’ve made some tremendous progress since [1994], but we still have a ways to go,” Turner told the crowd. “We still have to fight every single day to be more inclusive, and until everyone is recognized—whether they are gay, lesbian, transgender, you name it—and not discriminated against because of who they are or who they love, we are still not yet where we need to be. I want to make sure we continue to move forward in a very positive, progressive fashion, and that will take place as long as we have magazines like OutSmart.”

Two days later, I stood on the stage at Pride Houston’s 40th Anniversary Kickoff at Pearl Bar as president and CEO Lo Roberts announced a new partnership between the organization and OutSmart. For the first time in recent memory, OutSmart will publish Pride Houston’s official program in our June issue, which is shaping up to be extra-special.

Meanwhile, on the cover of this May issue, we feature Gina Ortiz Jones, who is vying to become the first openly LGBTQ Texan elected to Congress. Writer Marene Gustin profiles Jones, a Democrat who hopes to recapture one of Texas’ few swing districts in the U.S. House of Representatives.

Elsewhere in this issue, Gustin recounts the history of the Montrose Center, which is celebrating its 40th anniversary in 2018 with festivities planned for this month. Gustin also previews the University of Houston LGBTQ Alumni Association’s Red Dinner III, which will feature Cougar alum Stephanie Rice, a former contestant on NBC’s The Voice.

Finally, May is Asian Pacific American Heritage Month, which we mark with features on local activists Carl Han and Ching-In Chen (Gina Ortiz Jones also happens to be Asian-American). And, with the gun-control debate raging nationally, writer Kim Hogstrom takes a look at two LGBTQ groups that are on opposing sides of the issue.

This article appears in the May 2018 edition of OutSmart magazine.