The stars aligned for Robert Montgomery and Larry Ellis when they met while out and about in Montrose in December 2006. Both had recently moved back to Houston—Montgomery from Washington DC, and Ellis from Fort Lauderdale, Florida. They were also both living temporarily with their parents while apartment hunting—Montgomery in Sugar Land, and Ellis in New Caney.

Over lunch the next day at Barnaby’s, “Things went well,” Montgomery says, “and from there things progressed.”

Since they had both been gone for years and didn’t know many people in Houston, “we spent many nights and days getting to know each other over the phone,” Ellis says.

“I knew Larry was the one for me when he sent me flowers for my birthday at work,” Montgomery says.

On a weekend trip to DC the next February, Montgomery arranged for their room to be decorated for Valentine’s Day. “I could actually see the red glowing from our hotel room windows as I approached from the Metro rail station,” Ellis recalls.

From that point forward, they knew they wanted to be together forever.

“When we first got together 11 years ago, marriage wasn’t even a thought,” Montgomery says. “It wasn’t legal at the time, and we didn’t think it would ever become the law of the land, let alone even be an option. 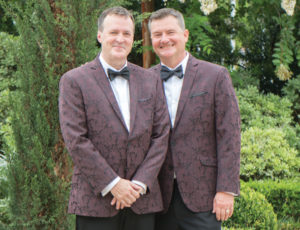 “After it became legal, Larry kept asking when we would get married,” Montgomery adds. “I planned to propose at our annual Halloween party, but that was months away. Between June and October, Larry became frustrated with me and decided that I was never going to ask.”

Finally, during a show at their Halloween party, Montgomery had cast members hold up signs saying, “Larry, will you marry me?”

“Lee had no idea,” Montgomery says. “When he turned around and saw the signs, he fell to his knees and started crying like a baby. I dropped to my knees as well, and presented him with a ring.”

Their neighbor and dear friend, Houston associate municipal judge Phyllis Frye, officiated. Another good friend, Richard Purcell, sang before and after the ceremony. “We injected a little humor into the ceremony as well,” Ellis says. “It was short and sweet, with tears and joy.”

Among the 40 wedding guests were Montgomery’s father (his mother is deceased), siblings, nieces and grand-nephew, and Ellis’ parents, siblings, and nieces and nephews. The wedding reception was at a friend’s home in west Houston.

The next morning, the newlyweds took off for Honolulu. They chose Hawaii because it seemed like a perfect honeymoon destination that neither of them had ever visited..

“We had a very traditional wedding, so it made sense to honeymoon in a traditional honeymoon location,” Ellis says. “Hawaii was fantastic, and it was quite surprising to see the love from strangers regarding our recent marriage.”

Unfortunately, the couple’s home was flooded during Tropical Storm Harvey, so reality has set in once again. They report that their home is now back to normal—“whatever that is.”

“And we’re better than ever,” the couple says.