A 1980s political drama is more relevant than ever.

Before you watch filmmaker Lizzie Borden’s groundbreaking queer 1983 indie classic Born in Flames—re-released on VOD in a newly restored high-definition 35th-anniversary version—it’s important to have some historical perspective. Borden, who at the time the film was made was calling herself bisexual, was an outspoken critic of Republican culture and President Reagan. So despite the film’s sloppy editing and sound issues, as well as its alternately scripted and improvised dialogue, Borden deserves praise for her frighteningly prophetic voice that speaks directly to our current social and political climate. In other words, 35 years after it was released, Born in Flames is hotter and more relevant than ever. 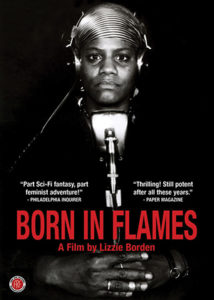 This fictional drama is set in a not-too-distant-future New York, during a week of celebration commemorating the 10th anniversary of “The War of Liberation,” which was the most peaceful revolution the world has ever known. It’s an opportunity to take a look back at the liberation events and the progress made during the 10 years that passed, with an eye to the future.

Women and minorities are now playing more prominent roles in society than ever before. A pair of pirate-radio DJs, Isabel (out singer/actress Adele Bertei) and Honey, keep listeners informed—as do the three female editors at the socialist newspaper. Unfortunately, there is division amongst the women about how to cover the radical, female-empowering actions of the lesbian Women’s Army, led by Adelaide (Jean Satterfield). Adelaide is a protégé of the outspoken lawyer and activist Zella (feminist, activist, and actress Flo Kennedy playing a character named after her mother).

Predictably, many men are none too thrilled with the changed attitudes about women. The male opposition, including government agents and officers of the law, keeps close tabs on the Women’s Army and other female activists. When Adelaide (who works construction during the day and goes to school at nights) is detained and dies mysteriously in her cell, the various women’s factions team up to avenge her death. One group of women takes over the local CBS affiliate, interrupting a presidential speech so that their taped demands and warnings can be broadcast. Another group makes a bomb and plants it in (of all places) the original World Trade Center.

Part of what makes watching Born in Flames so fascinating is picking out cast members, early in their careers, who went on to much bigger things. That’s Oscar-winning filmmaker Kathryn Bigelow as one of the newspaper editors. A young Eric Bogosian can be seen as one of the CBS technicians. The late gay actor/performance artist Ron Vawter plays an FBI agent.

Given the era in which this film was made, as well as its shoestring budget, Born in Flames can be forgiven for its many technical shortcomings. What makes it essential viewing with a timeless quality is the way visionary director Borden foresaw so many world-changing events of the last three decades.