The roots of today’s revolution.

It had to start somewhere. Someone had to make the first step, to pave the way, to drive a stake in the ground and say, “Here, now.” Someone had to be the first so that others could follow, and in the newly updated book Transgender History by Susan Stryker, you’ll see where we go next.

Opening a history book with a chapter on word definitions might seem odd, but author Susan Stryker notes that the “remarkable changes” over the last decade demand it. Thus begins this book, with new language for what is an old lifestyle.

Indeed, America’s first recorded “intersex” individual was Thomas(ine) Hall, who lived in the 1620s, “sometimes as a man and sometimes as a woman.” Seventy years later, however, the colony of Massachusetts made “cross-dressing” illegal, and those laws spread: by the 1850s, many U.S. cities had ordinances against dressing in clothing normally worn by the opposite sex.

And yet, it was hard to stop people who wanted to dress as (or fully transition to) another gender. Throughout the 1800s, records show that women dressed as men for battle, cross-dressers braved the frontier, men ran away from their families to be true to their feminine selves, and Native American cultures embraced transgender people. Stryker notes that after anesthesia was invented and surgeries were safer, “individuals began approaching doctors to request surgical alteration of parts of their bodies.”

The movement was relatively quiet around the time that the Nazis torched Dr. Magnus Hirschfeld’s Institute for Sexual Science in Berlin. But then American Christine Jorgensen “burst onto the scene” in late 1952 when she traveled to Copenhagen for trans surgery. Her ensuing fame didn’t signal full acceptance for trans people, but it was a start: riots in 1959 led to activism in the 1960s, and post-Stonewall groups consolidated to lend support and work through “difficult decades” of the ‘70s, ‘80s, and the AIDS crisis. Today, says Stryker, though we live in interesting times of Trump and turmoil, the news is heartening. Millennials and “post-Baby Boomers” have expressed more acceptance of “trans-gender as part of the ‘anti-heteronormative’ mix.”

Though Transgender History is a revised edition of a book first published a decade ago, it has a fresh feel, thanks to the author’s recent additions. The first chapter, somewhat of a dictionary, schools readers on new ways of talking about LGBTQ issues and individuals, while the last chapter of trans history brings readers up to the present, including topics of politics, public potties, and celebrity.

What makes Stryker’s book unusual is that, though it’s not always chronological, it is breezy and casually readable. There’s no stuffiness here, and no scholarly overtones: Stryker makes this history accessible for people who want a story and not a textbook.

So this book is a pleasant surprise—easy to read, not overly wordy, and with enough illustrations to make for enjoyable reading. For anyone who wants a basic, yet lively, overview of trans life in America, Transgender History is a great start.

Black on Both Sides: A Racial History of Trans Identity
C. Riley Snorton 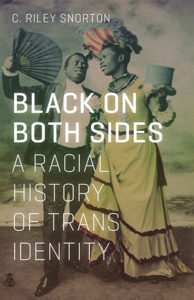 When the Cornell University Library recently assembled a display of “queer and trans performance” items, there was a singular piece of paper that caught Snorton’s eye: it was a French postcard depicting two black “transvestite” performers, possibly in a minstrel show. The Library called it a “rare” piece, but Snorton shows that African-American history is rife with examples of transgenderism. • During the Civil War, for example, slave women dressed in men’s clothing in order to be seen as male and to avoid bondage. Even Harriet Tubman disguised herself as a man to deter arrest. • Black sex-trade workers sometimes dressed as women, often to great mocking and even greater scandal. Nearly a century later, Lucy Hicks Anderson, a madam, became “the first transgendered black to be legally tried and convicted for impersonating a woman,” and was sent to prison for it. • Snorton also cites stories of Ava Betty Brown and Annie Lee Grant, both featured in Ebony and Jet magazines, the latter photographed in clothing for men and for women. • Readers might quibble with issues of definition, particularly “transgender” versus “cross-dressing.” Snorton refers to both in this book, but doesn’t seem to make very strong distinctions between the two. • There’s a wide variety of case studies and interesting stories in this book—much more than the average person might think there’d be—but whether the author has made the material accessible is quite another matter.