All about Almodóvar’s friend.

Anyone who has ever heard the late Spanish-language singer Chavela Vargas, who died at age 93 in 2012, knows there’s more going on than meets the eye . . . or the ear, for that matter. With their respectful and revealing doc Chavela, codirectors Catherine Gund and Dayesha Kyi give the true story of the ranchera diva a long-overdue telling. 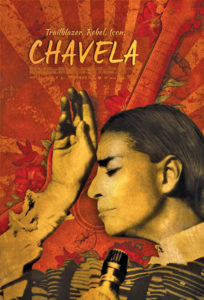 Born Isabel Vargas Lizano in Costa Rica, “at the end of the world” in 1919, Vargas describes herself as a sad and lonely girl who didn’t play with dolls and “grew up alone.” Mistreated by her religious and prejudiced parents who thought she was a strange “boyish girl,” the rebellious and full-of-rage Chavela lived with an aunt and uncle after her parents divorced—all the while obsessing about leaving home.

When she finally did leave in the 1930s, she arrived in Mexico City and discovered music and art waiting for her there. After striking up a friendship with ranchera music composer/performer José Alfredo Jiménez, Vargas earned a reputation as the best interpreter of his songs.

Chavela also succeeded in creating a persona for herself in a macho world where lesbians were marginalized. She skirted the hypocrisy of the patriarchal Mexican society (they all knew she was gay, but never discussed it) while opening doors for others, unaware that she would be constructing a legend.

Among the lovers Chavela claimed were Frida Kahlo (during the 1940s) and Ava Gardner (during the 1950s, when lots of Hollywood royalty spent time in Acapulco), as well as the wives of government officials. However, by 1973 her alcoholism was taking its toll on her career. She ended up broke, alone, and blacklisted in the 1980s.

Meeting the aforementioned Alicia Duarte (whom she called Nina) in 1988 was the beginning of her sobriety. That, and her belief in mysticism and shamans. Her 1991 performance comeback in Mexico City, singing sober for the first time, led to even greater opportunities. Pedro Almodóvar brought Chavela to Spain in 1992. As Almodóvar puts it, he found one of his “best collaborators” in Vargas’ voice, which became part of his film scripts. Happy in Spain, feeling “loved and protected,” Vargas officially came out. The revelation had no impact on her career, and she sang to packed houses at the Olympia music hall in Paris and in Mexico City at the Palacio de Bellas Artes in 1995, as well as throughout the early part of the 21st century.