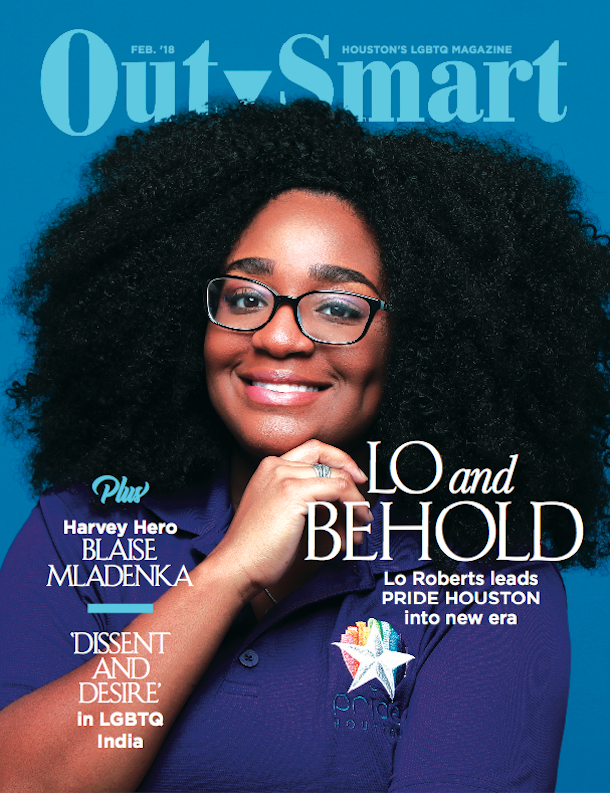 Pride Houston, Heroes of Harvey, Out for Change, and more.

With an annual budget of roughly a half-million dollars, Pride Houston, Inc., is among our most important local LGBTQ nonprofits.

While the annual Pride parade and festival represent Houston’s largest LGBTQ gatherings, the group’s influence extends beyond those June events to sponsorships and other activities throughout the year.

That’s why it is so critical that Pride Houston has resolved a months-long legal dispute involving its past president, and is moving forward under fresh leadership.

OutSmart takes great pride, if you will, in featuring Pride Houston’s new president and CEO, Lorin “Lo” Roberts, on our February cover. Among other things, Roberts is pledging to make Pride Houston “the organization of the community” once again.

Roberts also happens to be the first black female president of Pride Houston, and coincidentally, February is Black History Month. But she isn’t the only local black LGBTQ leader taking on a major new role.

Last month, Mike Webb became the first genderqueer president of the Houston GLBT Political Caucus, after being chosen by the group’s members to lead them through a critical election year. And Harrison Guy, who co-chairs the city’s LGBTQ Advisory Board, is preparing to launch Gatekeepers, a new organization geared toward empowering black gay men.

Elsewhere in this February issue, we chat with the artists behind Dissent and Desire, a photography exhibit at the Contemporary Arts Museum Houston that chronicles LGBTQ life in India, where gay sex remains illegal.

It is worth mentioning that since our January “Out for Change” issue went to press, the record number of LGBTQ candidates in Texas has increased from 35 to 49. OutSmart’s coverage of those candidates has also been picked up by numerous local, state, and national publications—from the Advocate magazine to Breitbart (yes, Breitbart).

On that note, I’ll leave you with a reminder that early voting in the March 6 primary races begins February 20. For more information, visit HarrisVotes.com.