During the Houston Pride festival last year, Lorin “Lo” Roberts walked around the grounds and asked people why the event was important to them.

One young woman told Roberts that ten years earlier she had come out to her family and friends in a small Texas town, only to find herself rejected. “But now, here I am celebrating,” the woman said.

Roberts cites this interaction as just one example of why she believes our annual Pride events remain relevant. She says the woman’s response made her feel thankful that she had joined Pride Houston years before as a volunteer, and was being groomed to take the helm of the group last fall.

On October 1, Pride Houston’s board voted unanimously to make Roberts president and CEO. Roberts, a “proud Houstonian” who describes herself as “28 years young,” became the first black female to lead the organization.

Roberts, who works as a nurse and identifies as queer, describes her life as “happy”—focusing first on her family and young daughter, and second on Pride and Houston’s LGBTQ community. “Between those two things, and working in the nursing field, I’m giving myself to a lot of different people who need me,” she says.

Roberts first joined Pride Houston six years ago. “I was ‘volun-told’ by an ex-partner to get involved,” she says. “I fell in love with Pride. I had a knack for it right off the bat. Over the years, I’ve become more and more involved, and I began to learn the inner workings so that I could eventually make a difference. To be honest, when I first became involved with the organization, there were not too many people that looked like me.”

Roberts says her biggest accomplishment thus far has been working to alleviate financial challenges by bringing in more sponsors. She also cites her ability to pull together the annual “Rock the Runway” event last year in less than 24 hours, coordinating the efforts of volunteer chair Anthony Ramirez and over a dozen “amazing volunteers.”

From a personal perspective, Roberts says she is proud to be Pride’s first black, queer, female president. “It’s not a pride I hold for myself, but one that I share with every other member of this community who looks like me,” she says. “These are strides for all queer people of color.”

The first test of Roberts’ leadership skills came sooner than expected. Halfway into her first month in office, former Pride Houston president Francisco “Frankie” Quijano wrote to board members and characterized Roberts as the “president-elect,” claiming that she did not meet the qualifications of the organization’s bylaws. Quijano asserted that he was still president.

It is possible that Pride board members would have entertained Quijano’s objection, if not for the fact that he removed Roberts as an administrator of their Facebook discussion group, and blocked her from accessing the organization’s bank accounts.

Fearing that Pride Houston’s business assets were endangered, Roberts and the board responded swiftly. They hired attorney U.A. Lewis, who filed a request for a temporary restraining order against Quijano and his husband, Abijah Kratochvil. The order was granted on October 23, and the parties came before Harris County State District Judge R.K. Sandill on October 31.

In court, Quijano maintained that a Pride Houston president must have two years of prior board service. Roberts had been a director on the board for one year, and an observer for one year. Pride Houston spokesman Dan Cato says it is commonly accepted that the observer role qualifies as board service. An observer is privy to all communications of the board and is expected to attend all meetings, but cannot vote. Quijano rejected that interpretation.

With the parties initially unable to reach a resolution, Sandill issued an injunction against Quijano on November 16, and set the case for trial in April. However, on December 22, Pride Houston and Quijano filed a joint motion to dismiss, signaling that the dispute had been resolved.

Quijano agreed to turn over access to Pride Houston’s business assets, and not to interfere with the operations of the organization. He also resigned from his position as board observer, while Kratochvil stepped down as a director. Under the agreement, neither party can take further legal action, and each is responsible for its own attorneys’ fees and court costs.

Cato says Pride Houston’s legal expenses totaled $3,000. He also confirmed that an audit by an outside agency is scheduled, to review Pride’s financial history and assist in establishing more transparent practices. According to a tax filing from 2015, the most recent year available, Pride Houston’s total revenue was $345,416. That was down from $413,000 in 2014 and $621,000 in 2013, records show.

Pride Houston board members say they remain baffled by the recent controversy. Quijano, who served as president since 2011, had openly discussed his plans to retire with various community members. He reportedly worked with Roberts for a year to prepare her for the presidency, and nominated her prior to the October 1 election. Two weeks later, he challenged her legitimacy.

Quijano did not respond to a request for comment for this story. His attorney, Angie Olalde, said in a statement that Quijano and Kratochvil were “happy with the parties’ mutual decision to end this litigation, and feel that the lawsuit should never have been filed in the first place.”

With the LGBTQ community now under attack at the state and national levels, Pride Houston board members say this year’s 40th-anniversary event will be as relevant as ever.

The theme of  this summer’s celebration is ruby, the traditional brilliant-red gemstone for 40th anniversaries. Iconic actress Judy Garland donned ruby-red heels in The Wizard of Oz, and the film’s signature song, “Somewhere Over the Rainbow,” has long been a sentimental favorite in the LGBTQ community.

Many of this year’s Pride events are still in the planning stages, and will not be revealed until an upcoming kickoff party. However, they  might include a first-ever LGBTQ Pride night at a Houston Rockets game, called “Ruby at the Rockets.” 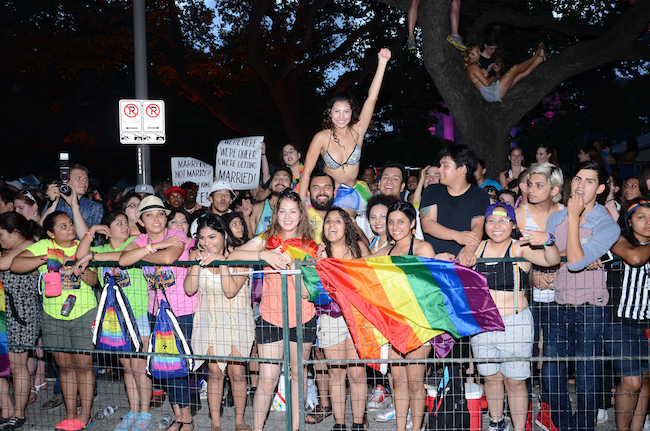 Pride Houston also plans to forego the traditional male, female, and ally grand marshals in 2018. Instead, the organization will honor all grand marshals from the parade’s previous four decades.

The parade and festival are set for Saturday, June 23. Originally scheduled for June 30, the date was moved to give the city time to prepare for its Fourth of July celebration.

Houston’s first official Pride parade was at 3 p.m. on July 1, 1979. It traveled east along Westheimer, from Shepherd to Bagby Street.

The Montrose route’s length and starting time would vary over the years. In 1997, the parade became a nighttime event, and in 2015 it was moved from Montrose to downtown. Anchored by a City Hall bathed in rainbow floodlights, part of the current route is the same one used in the 1977 Anita Bryant protest march that is widely viewed as the start of Houston’s LGBTQ movement.

J.D. Doyle, an LGBTQ historian, says Houston’s actual first Pride parade has been largely lost to history. It was held in 1976, and sponsored by the University of Houston’s Gay Activist Alliance. It started and ended downtown at the since-demolished Exile Bar. Participants marched for 19 blocks, with many onlookers joining them.

In 1977, the Bryant protest replaced the parade, and in 1978, “Town Meeting I” was the focal point. In 1979, the first major Pride parade commemorating the June 1969 Stonewall Riots was staged in Montrose with a grand marshal, floats, and the like.

The future of Pride

Looking ahead, Roberts says she wants to see Pride Houston “become the organization of the community again.”

“We do so much work to put on the celebration every single year, but that’s only a part of our responsibility,” she says. “Part of our initiative is to build strong relationships with other Prides across the state and around the nation. We can also establish better relationships with every facet of our community—especially members of color and the transgender community that often go unserved.

“I think we’d all like to get to a place where Pride events aren’t relevant, but we aren’t there yet,” Roberts adds. “I encourage our community to be more involved—to vote, to stay informed, to know their rights. I want us to have voices and to be heard.”

Roberts says Pride is also an opportunity to celebrate on behalf of LGBTQ people in other countries who are prohibited by law from doing so.

“It also gives us the chance to remind every elected official that they represent us, too,” she says. “One reason I am so passionate about Pride is because 364 days of the year we fight for equality, and this celebration gives us that one day to actually let go and be who we are.”

Including Roberts, the current Pride board has three voting members and one observer.

Dustin Sheffield serves as treasurer. He grew up in Pearland and now lives in Spring. With a degree in business administration and accounting from the University of Houston, Sheffield has most recently worked as a parts manager for a heavy-machinery company.

Jeremy Fain, who serves as secretary, migrated to Houston from Midland. He is a local real-estate agent and a music professor at Lone Star College.

Dan Cato, who serves as Pride’s marketing director and board observer, grew up in Nashville and studied economics at the University of Houston. He is the associate director of enrollment communications for UH-Clear Lake.

Pride Houston’s board can have up to 15 members. Board applications are accepted in July and August, with interviews and decisions in September.

The organization welcomes all community members who would like to apply. For more information, visit PrideHouston.org.