Always be yourself. Pretty much since grade school, that’s what you’ve been told. Take a breath, and you do you. People like you the way you are. You don’t have to try to be someone you’re not. Always be yourself—although, as you’ll see in True Sex by Emily Skidmore, that may well have caused gossip a century ago. 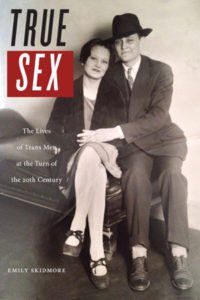 In 1902, women in the United States could not legally vote. Many couldn’t hold property or get credit, and joining the military was likewise forbidden. None of that was a concern to Harry Gorman, though: well-traveled, adventuresome, and married, Gorman lived in Buffalo, New York, where he was known as a good man.

Except that Gorman was anatomically a woman.

That surely came as a surprise to doctors, jailers, and undertakers who discovered the secrets of Gorman and men like him. But Skidmore says that the opposite is true of everyday folks, as evidenced by articles in many small-town newspapers: locals often knew the “true sex” of trans men in their midst, and didn’t much seem to care.

Skidmore reveals that many trans men in the late 1800s and early 1900s married, perhaps to cement their appearance as “good men” in their towns. Once discovered, they were often known in the press as “female husbands” because the term “lesbians” hadn’t taken hold yet—and at that time, women were largely believed to be asexual or unable to be passionate. So even though small-town Americans may have been titillated, they weren’t quite as naïve as we might think they were.

Perhaps because the science of sexology was still in its infancy and words were lacking, many of the men explained their actions as a way to make a living, or because it was more comfortable to dress and live as a man. Some didn’t explain at all, while others said they lived as men to take advantage of the rights that men had, and in order to avoid embarrassing their new wives. In many cases that Skidmore found, those reasons didn’t matter to neighbors. However, intolerance was never far away.

When one considers the pre-Stonewall attitudes toward LGBT individuals, it’s quite eye-opening to know that tolerance was practiced well before discrimination was. It gives you more respect for your elders—and yet, as you’ll see in True Sex, laissez-faire attitudes weren’t widespread.

Using the tales garnered from newspaper accounts of the day, author Emily Skidmore shows how small-town residents around the turn of the last century viewed trans men—and at the same time, the women who loved women. Not only are those stories fascinating, but they contain a certain quaintness that belies what can be read between the lines. The newspapers indeed had a lot to say, but there was an equal amount that they didn’t say, and that readers, Skidmore believes, surely implicitly understood.

This book veers off into the scholarly now and then; even so, it’s readable by anyone who’s interested in this history. If that’s you, True Sex is a book you’ll want for yourself.

One of These Things First
Steven Gaines 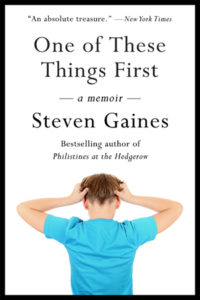 For years, Steven Gaines suffered from nervous tics, obsessions, and compulsions. This was humiliating, but a dawning knowledge that he was a “homo” was much more distressing. It was downright disgraceful, in fact, and so Gaines cut himself badly, and ended up in a hospital with a referral to a regional psychiatric facility. On a late winter day in 1962, at the age of 15, Gaines entered Payne Whitney. He was scared, but it was something he’d asked for, knowing that he was trading one shame (homosexuality) for another (being a “mental patient”) but hoping that it might stop his obsessions with counting, and with other boys. Beginning in a lady’s garment store, author Gaines takes readers back in time so precisely and so vividly that you can almost smell 18th Avenue, Brooklyn. There’s a distinct feeling of Hollywood movie to that; in fact, Gaines includes bits of his film-fan childhood as plot, but that nostalgia has a flip-side: the shame and need that a 1960s-era gay adolescent might experience comes through the earliest part of the story, sharp, clear, and squirming; the latter half of this book is more lighthearted, but still discomforting. So why read it? Because it’s irresistible and compelling. Because it’s triumphant. Because One of These Things First, now in paperback, is an enormously good memoir. Delphinium Books (delphiniumbooks.com).