It’s time to drain the swamp, both literally and figuratively.

Everything about 2017 was big for Houston. The Astros won their first World Series. The city hosted an outstanding Super Bowl with a subversive performance by queer artist Lady Gaga. LGBTQ advocates defeated the terrible “bathroom bill” in Austin—twice. We endured Tropical Storm Harvey, the costliest natural disaster in U.S. history, and responded by helping one another in the only way we know how—bigly.

That said, the winds of 2017 blew in a few things that should stay in 2017. So out with the old and in with the new—and in no particular order, here is my third annual list of “Top 10 Things To Leave.”

1. Floods: Since 2015, Houston has been flooded by major storms annually, and each one seems worse than the last. While places like Meyerland were flooded during Harvey for a third time in as many years, residents of areas like the Energy Corridor discovered they are not immune to the problem, either. But through great tests come great triumphs. LGBTQ Houstonians stepped up to the plate in a big way as first responders, leaders in the public and private sectors, and just neighbors helping neighbors. To top it off, the Montrose Center created the largest LGBTQ natural-disaster relief fund in history.

2. Lieutenant Governor Dan Patrick: With the help of  lackeys like state senator Lois Kolkhorst (R-Brenham) and governor Greg Abbott, Patrick was able to make Texas the center of negative attention for much of 2017. His obsession with what people do in the restroom brought the Texas economy to the brink of disaster twice. Fortunately, Patrick’s anti-trans crusades were flushed in both the regular and special sessions of the Legislature. But like any turd, Patrick and his hateful legislation will resurface if he is re-elected in 2018, when he faces both Republican and Democratic challengers. It’s bills like this that endanger the lives of trans people, 23 of whom have been murdered so far in 2017.

3. Mass shootings: It’s been one of the deadliest years ever for mass shootings in America. On average, we lose one person per day in mass-murder events, and dozens more in daily gun violence that barely makes the news. GOP leaders like President Trump seemingly replaced their tired “thoughts and prayers” mantra with “Now is not the time to talk about it.” But let’s face it, now will never be the time for those who have sold their souls to the NRA.

4. Voter Apathy: Voter turnout in Texas is among the lowest in the nation. Maybe that’s how we elected GOP senator Ted Cruz, the anti-LGBTQ enemy of democracy, back in 2010. It may also explain why Houstonians have been saddled with Republican congressman John Culberson, who has a dismal record on LGBTQ issues, and Harris County’s Republican clerk Stan Stanart, who tried to prevent same-sex couples from obtaining marriage licenses after Obergefell. If pro-LGBTQ voters turn out in 2018, we’ll have a chance to topple these hurdles to equality. If you’re not registered, visit VoteTexas.gov/register-to-vote.

5. State Senator Joan Huffman (R-Houston): Huffman has always supported legislation that endangers the lives of LGBTQ people, but this year was particularly significant for her. The Houston-based senator chaired the Senate Committee on State Affairs, where she helped ram through Patrick’s bathroom bills. During a marathon public hearing (where the vast majority of testimony was against the bills), Huffman was overheard on a hot mic apparently berating trans Texans. When contacted about her alleged comments, Huffman’s office had no response. The good news is, Huffman is up for re-election in 2018, and former GLBT Caucus president Fran Watson, a Democrat, is running against her.

6. A?: If you think the debate between political parties is heated, you should avoid the feud between iPhone and Android users. Apple launched a new line of products in time for the holidays, including a watch, the iPhone 8, and the iPhone X. However, it was the new version of Apple’s operating system that overshadowed its product release when a glitch started inexplicably replacing “I” with “A?”. Smug Android users were vindicated, and some Apple users announced their defection on social media by writing, “A? HATE APPLE!”

7. Silence about Sexual Assault/Harassment – Sexual assault and harassment are illegal, and they must go. This year shined a spotlight on what many already knew—that victims and witnesses often don’t report it, resulting in a painful shame that only perpetuates the problem. We need to give victims of sexual assault and harassment safe spaces to come forward, and we need to speak up when we see it happen.

8. White Nationalism: White supremacy has been rebranded as “white nationalism.” Make no mistake, it is still racism. With the rise of Trump and his divisive politics, white supremacists are emboldened. The racists and neo-neo-Nazis who stormed Charlottesville, Virginia, over the summer with tiki torches are proof. This event ended with the murder of a young woman who was counter-protesting. Hatred is alive and well. Let’s make 2018 about eradicating it. 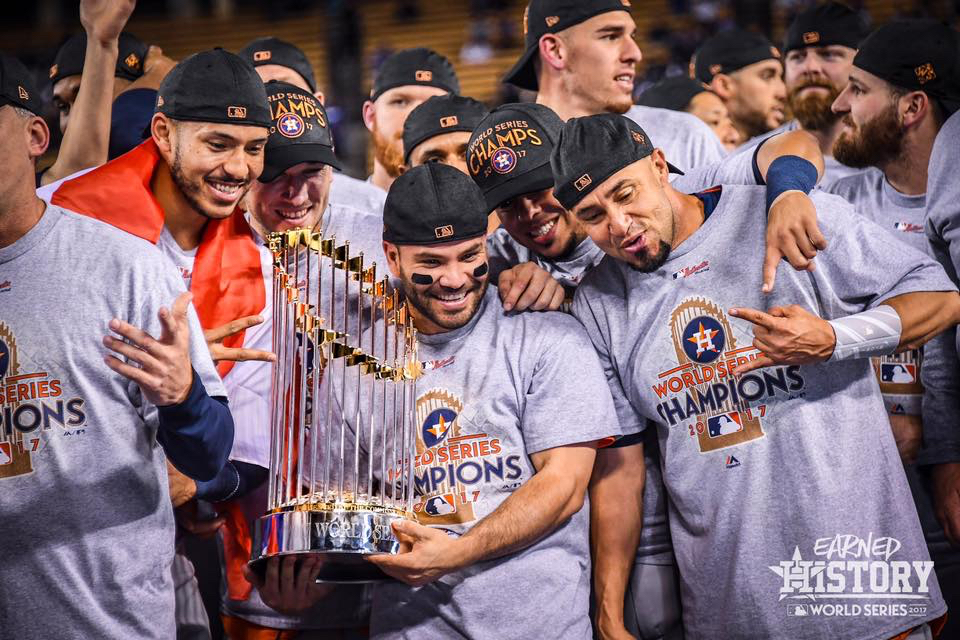 10. Confederate Statues: A statue of a Confederate general who fought in the Civil War does not honor history; it memorializes treason, hatred, and slavery. Many of these statues were erected during the Jim Crow era as a subtle message to black people that they would never be considered equal. In other words, they are a middle finger to people of color, smack-dab in the middle of town squares throughout the South.

And finally, according to reader suggestions, there are a few other items that should be left in the waste bin of time, including fidget spinners and cold-shoulder sleeves. I won’t argue with that.

I don’t see how Houston could do things any bigger in 2018, and I don’t know that we would want to. Ready or not, here it comes!