The school board for the 500-student Marion-Florence school district voted 4-3 this month to put an end to the homecoming week tradition, which had created challenges in the past. Superintendent Aaron Homburg told The Associated Press that last year one student wasn’t allowed to paint a Confederate flag and another was stopped from painting a marijuana leaf.

“It’s not about one instance,” Homburg said. “There have been issues in the past.”

The latest concern arose in September when vandals covered Marion High School student Logan Waner’s flag design with black latex asphalt sealer. The principal had approved the design beforehand and he and classmates went to work with a power washer, uncovering the flag beneath.

The flag design touched off a community debate, with some calling the district office and others weighing in on social media. Members of the Westboro Baptist Church in Topeka, which is known for its anti-gay protests, demonstrated briefly in November but were outnumbered by counter-protesters.

Waner told The Wichita Eagle on Facebook messenger that students and the community want the tradition back.

“I’ve heard a few people talking about it, and they’re not too happy with the decision,” he said. “But I haven’t been blamed for the decision. I think all the blame is going toward the school board.”

The district plans to look for a new tradition in an effort to avoid a potential First Amendment free speech challenge were it to prohibit some messages and allow others. Also contributing to the decision to end the tradition is that the principal who started it is retiring at the end of the year, Homburg said.

The painted spaces will remain this year but won’t be allowed next year.

“I can tell you through it all, I’ve had numerous folks call and support the school and the things we do for kids,” Homburg said. “We want to do great things for kids.”

This Sr. woke up to his rainbow painting covered with roofing tar. He and his friends are making progress at removing it. More on @KSNNews pic.twitter.com/Xvdb1RU6vm

That didn't last long. A Marion High School student washed the black paint off that someone painted over his parking place. pic.twitter.com/Mo46Sr7EZH 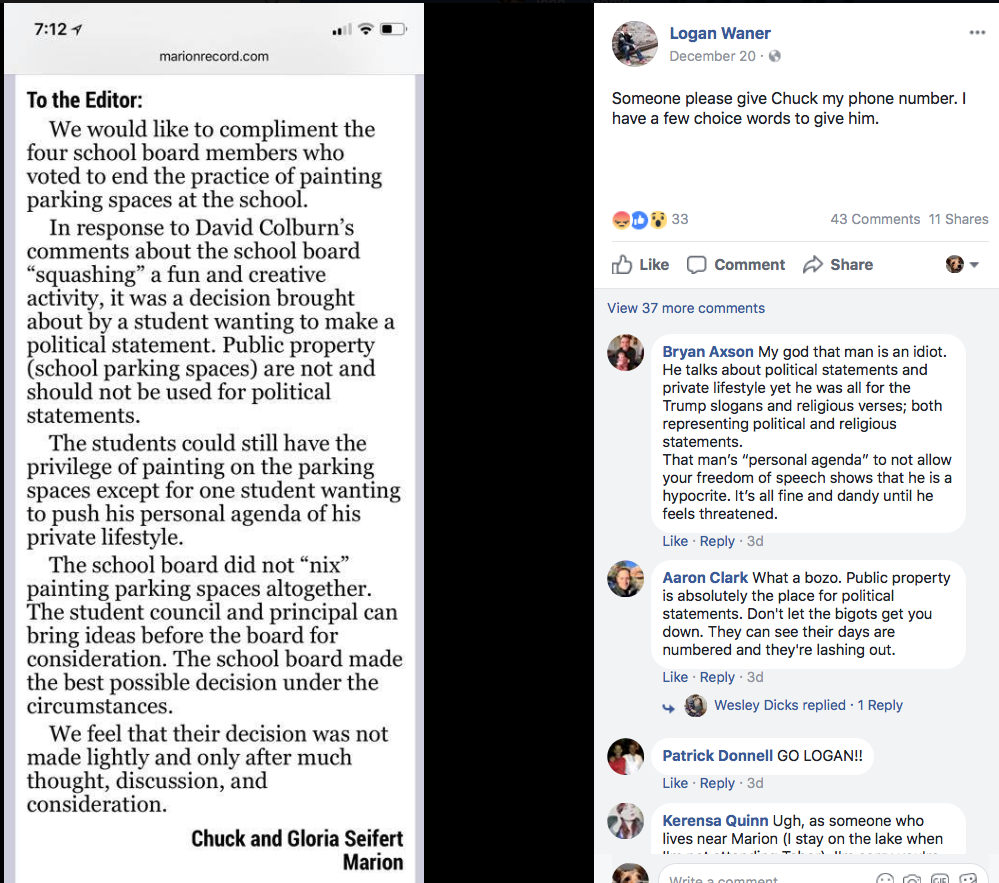