The perils of marriage equality.

You’re not in any hurry. The ring’s on your finger, the engagement was just announced, and you both feel like you’ve got plenty of time. Now’s your chance to enjoy the process of getting married and planning your future together. But Wedlocked: The Perils of Marriage Equality by Katherine Franke asks the question: why marry at all? 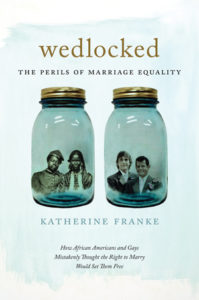 When president George Washington died, his will stipulated that his slaves should be given their freedom after the death of his wife, Martha, who inherited them.

This, says Katherine Franke, accidentally “put a price on” Martha’s head, and revealed Washington’s acknowledgment of one of the complexities of slavery: marriage among the Washington slaves meant that freeing his without freeing hers would break up families. This issue, and others before and after the Civil War, illustrates how “many of the experiences of African-Americans held out a message to the same-sex marriage movement today.”

Throughout American history, Franke says, the “rules” of marriage for non-white or gay individuals hid a double-edged sword of enhanced rights and enforced matrimonial laws complicated by the pre-Emancipation fluidity of relationships and looser definitions of “marriage” within early African-American communities. The current lack of awareness about state marriage laws in today’s LGBT community presents a similar problem.

The bottom line that’s often not emphasized: when a couple marries, the state suddenly “acquires a legal interest in your relationship.” Now, as then, marriage may also be legally “forced” on a couple: in the case of former slaves, to gain benefits in wartime; for LGBT couples, to continue receiving health-insurance benefits. And beyond all of that, marriage, as Franke reminds readers, has never offered a guarantee from discrimination.

Is it possible, Franke asks, that “the inability to marry creates a kind of freedom from the ‘bonds’ of marriage?” At a time when the marriage rate in the black community is low and LGBT parents are demanding new legal definitions of “family,” will marriage become antiquated? Or is the “freedom” to marry just another way for society to meddle in the lives of marginalized individuals?

To be sure, Wedlocked is not exactly a fun weekend read that you’d take to the beach. Fun, no. Interesting, absolutely.

It’s also quite thought-provoking. Author Katherine Franke is the director of the Center for Gender and Sexuality Law at Columbia University, and in this book she asks hard questions in between her jaw-dropping history lessons and arguments that marriage is both burden and boon to anyone who’s not white and straight. That’s not to say that the institution is dead; instead, Franke wonders if, of all the civil rights that were denied former slaves and gay individuals, marriage may have been the oddest choice to become the hallmark legal battle.

But which other right would’ve been better? That question seems open for discussion—just one of many questions that readers are given to ponder in this heavy-duty, scholarly book. But be aware: Wedlocked, now in paperback, can’t be enjoyed and contemplated if you’re in any hurry.

‘Straight Expectations: The Story of a Family in Transition,’ by Peggy Cryden 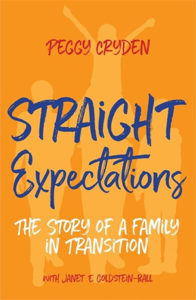 Everything in Peggy Cryden’s life, it seemed, had readied her for what was to come. Adopted as a small infant, her mother suffered with emotional issues that Cryden didn’t completely understand until she was an adult and a working therapist. Though she was generally independent much earlier, Cryden moved out of her parents’ house when she was still in high school. Later, while attending community college, she met the man she would marry, although Cryden indicates that she sometimes felt she couldn’t “bond.” That feeling extended to Julia, her firstborn child. Cryden was a little more centered when her second child, a boy named Jay, was born. But then Julia, who was just a teen, revealed that he had come to the understanding that he was really a boy. Shortly after this, fragile Jay, who’d always felt left out, decided to come out as gay to his family. With its message of affirmation, unconditional love, and healing, Straight Expectations is a good story that unfortunately needed some tough love with a red editing pen. You may like it enormously, but just be prepared. Jessica Kingsley Publishers (jkp.com). —Terri Schlichenmeyer