Psychologist O.T. Porter on coming out as a gay black man in Houston.

On January 5, 2010, just days after O.T. Porter came out, his mother was diagnosed with lung cancer.

“I cursed my gayness, and I blamed myself for my mother’s condition,” Porter recalls.

Porter, a Houston psychologist, recounts this and other experiences in his new book, Dear Anonymous Friend, an autobiographical look at the four-year period before and after he began living as an openly gay man. 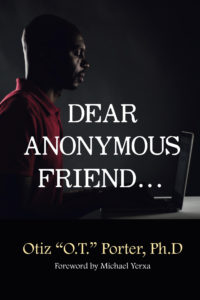 Porter, now 40, grew up in Newark, New Jersey, and lived there until he was 28. In 2005, he moved to Houston to be closer to his mother. After enrolling at the University of Houston in 2007, he began navigating LGBTQ life.

Dear Anonymous Friend is set in the late 2000s when Porter was working toward his undergraduate degree. He says that during those years, life in the closet was exhausting because of the social pressures he faced.

“I wasn’t completely miserable, but I was mostly miserable,” Porter says. “I was constantly [battling] myself, and that’s a fight that you can’t walk away from.

“There was the public me that most people knew and understood, and then there was the private me with a handful of gay friends who saw a different side of me,” Porter adds. “Neither of those entities were who I truly felt I was.”

Growing up in inner-city Newark, Porter says he learned to be aggressive. But in Houston, he was often told he was too tough.

“Masculinity is a moving target,” Porter says. “Everywhere I went, the standard was different. All I wanted to do was fit in, but I’m six-foot-seven-inches tall and 185 pounds. I was not made to fit in.”

Porter says he wrote Dear Anonymous Friend for others like him who felt like outcasts when they realized that they were different. Porter says his race and interests made it difficult for him to identify with other gay men due to the lack of black LGBTQ representation in the media.

“When I saw other gay people, I thought I must not be gay because I couldn’t relate to them,” Porter recalls. “But I knew my attraction to men. I knew I felt the way gay people feel.”

Throughout the novel, Porter tries to figure himself out the way that many young LGBTQ people do. He used the Internet to create friendships with people who were living or had lived through similar experiences. He went to gay clubs often, and sought out support groups and organizations that would help him find a place within Houston’s LGBTQ community.

After Porter came out publicly, he feared that he had made the wrong decision. He struggled to find acceptance within his own family and blamed himself when things went wrong, even if they were beyond his control. Porter says that religion and a heteronormative society made him feel as though his coming out would ultimately be his downfall.

“I felt like my sin was hubris,” Porter says. “I was brave enough to stand before God and be gay, and I was told that I was going to be punished for it. Religion and society pointed to my gayness and told me that it was wrong. It made staying in the closet sort of simple. This is why I feared moving forward.”

Porter had to put these thoughts aside to live his life truthfully. Once he began to find solace in relationships and a place in the LGBTQ community, he started to live without regrets.

Now a professor at the University of St. Thomas, Porter is also married to Chad Fisher, who is the subject of a few chapters in the book.

“I wanted to live my truth, regardless of the obstacles,” Porter says.

Each time he shared pieces of his life story with friends, he was told that he should write it down. Porter says he began organizing his thoughts in 2015 and started writing Dear Anonymous Friend eight months ago.

“When I realized that my story could help [far more] people than my one-on-one interactions could, I decided to write it,” Porter says. “As a openly gay man, I needed to do my best to pay it forward to the LGBTQ trailblazers before me who let me have my voice. I hope my book will help to make sure that no one else feels voiceless.”

Digital and print copies of Dear Anonymous Friend can be purchased online at tinyurl.com/OTPorterbook.