Montgomery County isn’t exactly a liberal bastion, and the Commissioners Court is all Republican. However, identical “whereas” clauses in both proclamations include LGBTQ people.

“Whereas, there are no restrictions on who can adopt based on race, ethnicity, religion, sexual orientation or expression, gender identity or marital status …” the proclamations state. (Read the full text here and here.)

Dave Welch, a Montgomery County resident who serves as president of the anti-LGBTQ Texas Pastor Council, responded in a letter to County Judge Craig Doyal, who chairs the Commissioners Court. Welch wrote that he was “compelled to express deep disappointment on behalf of pastors in the county and around the state.”

“What appears to be on the surface an incolulous (SIC) statement — a statement we otherwise enthusiastically support — is tainted intentionally with a critical element of anti-family propaganda that is offensive and unacceptable,” Welch wrote.

“There are literally countless categories of human condition on which ‘there are no restrictions,’ so the inclusion of ‘sexual orientation or expression, gender identity’ give [SIC] them special status equal to legitimate state and federal equal rights characterisitcs that you listed prior to that,” Welch added. “The question is why a Republican County Commissioners court would cater to a radical anti-family agenda in violation of your own party platform, credible social science and basic common sense.”

Welch concluded his letter by demanding a written explanation from Doyal and other commissioners who supported the proclamations.

The Pastor Council, aka the US Pastor Council or the Houston Area Pastor Council, was heavily involved in a successful effort to overturn the city’s Equal Rights Ordinance in 2015. The group also lobbied in support of an anti-LGBTQ adoption law that passed the Texas Legislature this year. The law allows taxpayer-funded adoption and foster care agencies to discriminate against LGBTQ people based on religious beliefs. But Welch’s letter, which you can read below, seems to indicate that the group’s ultimate goal goes beyond that: banning adoption by LGBTQ people altogether.

Although the Pastor Council is not yet on the Southern Poverty Law Center’s official list of anti-LGBTQ hate groups, it certainly deserves to be. 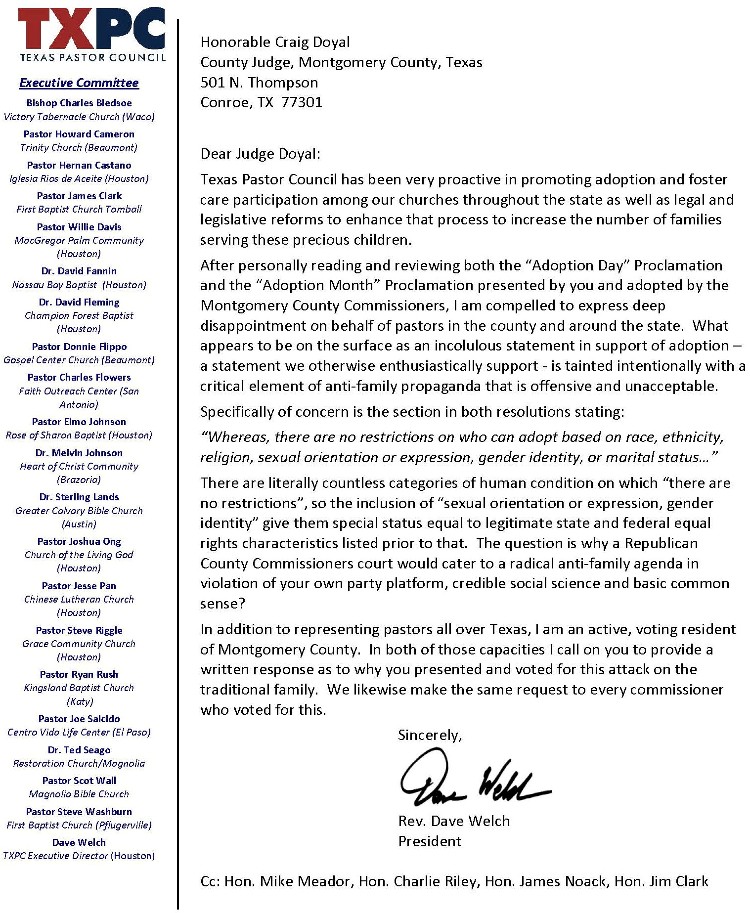