What’s so special about Kevin “Special K” England? Pretty much everything. KRBE 104.1 FM listeners love his personality and his on-air prank phone calls, and the LGBTQ community loves the way he gives back. And we assume his boyfriend of 16 years, Brian, appreciates his humor and his boyish good looks. England has been wowing his fans on the air in Houston since the late ’90s, and before then he was known throughout the gay clubs for his DJ skills. 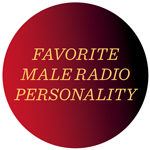 “I still like to spin once in a while,” says England, who occasionally DJs on weekends. “But it wasn’t really stable work. I wanted to stay in music somehow, and I’d met some radio people who told me to go for it. KRBE liked me, and now I get to play music live for millions of people every day. And I get to be gay on the air!

“I think I’m about the only [openly gay host] on the radio,” he adds. “It’s frustrating to see those who still aren’t out.” His station encourages him to be out and proud, and he thinks it’s the best job anyone could have.

Originally from Delaware, England once worked as a Merchant Marine. Now, he loves to play music that makes people want to get up and dance. As a regular on KRBE’s Roula & Ryan morning show (the duo that gave him his Special K moniker), he plays retro music, and on Fridays he does prank calls. You can email him at [email protected] and request that he prank your friends (or frenemies). The results are often hilarious.

On the serious side, Special K frequently volunteers his time and talents in the LGBTQ community and beyond. He’s hosted the AIDS Walk, works with the Human Rights Campaign, frequently helps out at local animal shelters, and is working on an April Red Dinner gala that will raise funds to help LGBTQ youth to stay in college. “It can be very difficult for LGBT youth to get an education when they don’t have the support of their families, so this is really important.

“Volunteering is my church,” he adds. “It’s just as fulfilling as sitting in a building listening to a sermon. If you can give back in your free time, you should.”

Funny, fabulous, and a real hero in the community, England is a repeat winner in this category. —Marene Gustin

Most Supportive Local Business of the LGBTQ Community

Most Supportive National Business of the LGBTQ Community