Darius Vallier says he “was horrible on the microphone” when he debuted his own show at Michael’s Outpost last December—his prize for winning Season 8 of Dessie’s Drag Race. “I guess I was just so nervous, so I took it as a challenge,” Vallier says. “By the third or fourth week, I felt more comfortable. I started to enjoy it, having my own platform like that.”

Soon, Vallier left behind his job as a bartender to devote himself to a career performing as Blackberri, his bearded-lady drag persona. “I saw a lot of entertainers and felt there was a need for something new,” Vallier says, referring to the beard. “Most people don’t know I do drag. If you see me out and about, you wouldn’t know unless I have some leftover eyelash glue. I might have glitter on my face the next day.

“I am beyond surprised that it’s actually my full-time job,” Vallier adds. “I’ve only been doing it a nanosecond, but it pays my rent and everything.”

In June, the host with the most introduced Houston children to his drag character when Brazos Bookstore invited Vallier to star in its LGBTQ Pride Month attraction, Drag Queen Story Hour. “This was a really huge, happy event,” says the bookstore’s marketing director, Sara Balabanlilar. “Everyone crowded around to hear Blackberri read Red: A Crayon’s Story by Michael Hall.”

In the award-winning 2015 children’s book, a blue crayon that’s mistakenly labeled red overcomes its identity crisis to discover the unrecognized power of its true inner self. 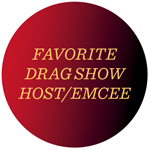 The event was such a hit that the Houston Public Library hired Vallier to launch its new program, Drag Queen Storytime, this fall. “I was surprised, but very happy,” says Vallier, who grew up in Lake Charles, Louisiana. “Texas is not the most progressive state, but Houston is very progressive.”

The city’s next Drag Queen Storytime is planned for Saturday, November 25, at the Freed-Montrose Neighborhood Library. Meanwhile, Blackberri regales gay fans at three regular weekly gigs in addition to bookings at other venues.

“You can catch me at ‘C U Next Tuesday’ every week at Michael’s Outpost,” Vallier says. “I host and perform, and I am the show director. I do a lot of old divas like Patti LaBelle and Aretha Franklin. I do some cartwheels and splits.”

On Wednesday nights, Blackberri emcees Gayme Night at The Room Bar and Lounge in Spring. “We play ‘gaymes’ like ‘adult’ Twister—the kind of games you play at a baby shower.”

On Saturdays, he’s back at Michael’s Outpost for Eye Cons, a professional celebrity-illusion review. “I just host,” he says, “and I do joke illusions.”

The 27-year-old bachelor studied musical theater for two years in college before enrolling in fashion design at the Art Institute of Houston. “After two years there, I took a break to work,” he says. “I felt like I had learned everything I needed to learn in school for the path I wanted to take.”

Vallier credits—who else?—Bob the Drag Queen, winner of the eighth season of RuPaul’s Drag Race in 2016, for luring him into female impersonation. “He is definitely one of the reasons I started doing drag, along with Ursula from The Little Mermaid,” he says. —Don Maines